Each day miraculous to grandson of Baptist preacher

L. Warren Harvey blends many voices, traditions over 25 years in the priesthood 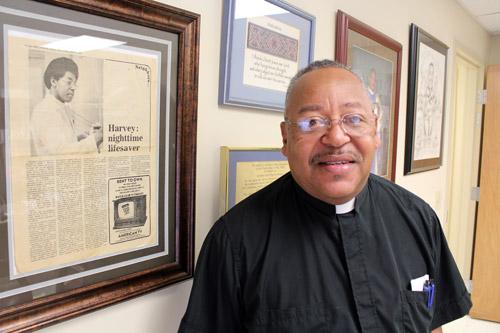 Dwain Hebda
Father L. Warren Harvey in his office at Our Lady of Good Counsel Church in Little Rock. A descendant of Baptist preachers, he began a career in medicine before entering the seminary. He was ordained a priest May 28, 1988.

Dwain Hebda
Father L. Warren Harvey in his office at Our Lady of Good Counsel Church in Little Rock. A descendant of Baptist preachers, he began a career in medicine before entering the seminary. He was ordained a priest May 28, 1988.

The office wall at Our Lady of Good Counsel Church in Little Rock holds a line of framed personal memorabilia tracing the life of Father L. Warren Harvey. It spans his journey from the pastures of youth through 25 years behind the altar.

“I look at these, from there to there,” he says, sweeping his arm from the opening photo — him at about 12 months — to something more recent to his 59 years. “I keep asking the same question, ‘How did that little black child get here?’”

The mementos don’t tell the whole story but are illuminations to a larger narrative. For the intervening text — shaped equally by segregation and diversity, science and ecumenism — you have to hear it from the man himself.

“Every day is miraculous,” he said. “You wake up not knowing what God’s gonna do.”

He was born March 3, 1954, the baby of Eldridge and Mary Harvey’s 14 children. His father, a farmer and plumbing tradesman, was Catholic. Every Sunday he’d troop the brood to Church of the Good Shepherd in Conway, one of Arkansas’ 10 black Catholic churches.

His mother belonged to a local Primitive Baptist congregation, a denomination in which both his grandfather and great-grandfather were preachers. Father Harvey would tag along, captivated by the soulful line singing and impassioned sermons.

“They were so different, one was nothing like the other,” he said of the two congregations. “Eventually I made sense of it and it’s what I am. Years later in homiletics class, my fellow students said my preaching was excellent. The professor said, ‘Sounds a little Baptist.’”

The race divisions of his time were sharp. Eldridge Harvey had to sit on the back pew in some parishes, but that didn’t dilute his insistence that his children attend Catholic school, which only left all-white St. Joseph School after Good Shepherd School closed in 1965.

But even boarding the bus that first morning under the driver’s disapproving glare and no vacant seats available among the all-white riders, God sent a message. No one moved, he said, “except the Catholic kids. Because we were their classmates.”

Graduation from St. Joseph School brings you to a yellowed newspaper clipping on Father Harvey’s wall. In it, Harvey, who chose to become a nurse, is profiled on his overnight shift at a local hospital. Medicine was his first path, but as he dreamed of being a surgeon the murmuring call to vocation persisted.

“I thought I was Catholic for a reason, but the Church felt boring to me; I could give talks and reflections, but I couldn’t preach,” Father Harvey said. “The Protestant churches had that, but other things I couldn’t get behind. I felt called to preach, but I couldn’t find a place.”

He took his dilemma to his grandfather’s gravesite and anguishing aloud, asked for guidance. To his astonishment, he heard the words of St. Paul in 1 Corinthians, “By the grace of God I am what I am.”

He was accepted as a seminarian for the Diocese of Little Rock though he still had some doubts.But one day into studies at St. Joseph Seminary in Covington, La., Father Harvey was hooked. After graduating from St. Joseph he attended Notre Dame Seminary, also in Louisiana, and was ordained a priest May 28, 1988. His assignments have included St. Augustine Church, St. Mary Church and St. Patrick Church, all in North Little Rock; and St. Joseph Church in Pine Bluff, attending Fordyce and Sheridan.

In January, he returned to Our Lady of Good Counsel, which he served as associate pastor after ordination. Back then he dubbed it “Stained Glass Parish” — a title the congregation carries proudly even today — in honor of the many cultures represented.

A quarter century gone by, he’s still eager to see where the road leads. He long ago stopped trying to second-guess or bend it to his will. It’s God at work daily, he said; nothing else makes any sense.

“The Mass is the greatest miracle of all and sometimes when I’m up there, I still can’t believe I’m the one celebrating it,” he said. “I’m excited every day that God uses me to serve others. That’s when I am most like Jesus Christ.”