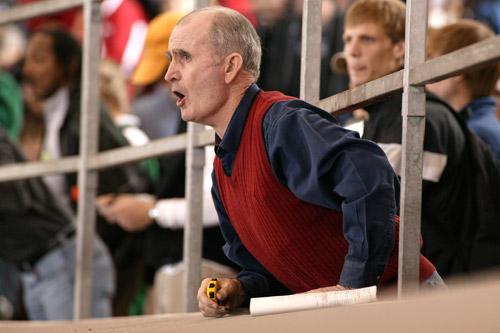 Wesley Hitt, courtesy University of Arkansas
John McDonnell, retired U of A coach, urges on his runners at a Feb. 13, 2003 meet in Fayetteville. McDonnell led Arkansas to 40 track and cross country national championships in 36 years.

Wesley Hitt, courtesy University of Arkansas
John McDonnell, retired U of A coach, urges on his runners at a Feb. 13, 2003 meet in Fayetteville. McDonnell led Arkansas to 40 track and cross country national championships in 36 years.

With 36 years as the head coach of the Arkansas track and cross-country teams, a tenure that included 40 national championships, 83 conference championships and 23 Olympians, you’d think there’s some magic formula to be found in “John McDonnell,” the recently released biography of the legendary coach.

Amazingly, there is not.

Such is not to say the book, written with former competitive runner and coach Andrew Maloney, is lacking in details about the now-74-year-old retired Arkansas legend. To the contrary, the well-documented work paints a vivid picture of McDonnell’s humble Irish upbringing, his beginnings in the sport first as an athlete then as a coach and the construct of the greatest dynasty college athletics is likely to ever see,

But try to discern what angle McDonnell played to get there and you will find none. Brought up in the rural countryside of World War II Ireland — where opportunity was so scarce parents expected children with any ambition to emigrate elsewhere as a matter of course — hard work alone became the so-called “secret ingredient” to everything he did, as his brother recalls in the book’s first chapter

Maloney writes: “‘(John) always took on a lot of the hard work,’ remembered Michael. ‘I always remember him being very dedicated to work.’”

Other core beliefs such as fair play, tolerance and competing to win also grew out of McDonnell’s formative years. Naturally fast, he developed into a multiple Irish national champion, including in 1960 when the only thing that kept him from running in the Olympics was the fact another qualifier was older and Ireland’s Olympic committee lacked the funds to send more than one runner.

“Everyone said ‘Oh, next time you’ll make the team,’ but the next Olympics I hurt my Achilles,” John writes in the book, adding it taught him the important lesson, “Don’t put off something you can do today because tomorrow may never come.”

Like many of the countrymen his age, McDonnell had a desire to conquer America and for him that began with a college education, the importance of which was preached to him from childhood. He worked his way through one semester at Emporia State University in Kansas then landed at the University of Southwestern Louisiana (now University of Louisiana at Lafayette) on an athletic scholarship. There he firmly fixed his reputation by twice earning All America honors and beating one of the titans of American running, Jim Ryun, head to head.

Amid his competitive success in the deep South, the book also details McDonnell’s rude awakening to overt racism there, problems that spilled over into the high school where he taught after college. Having married fellow Catholic Ellen Elias of New Jersey, there was a good chance his coaching career might have played out somewhere father north than Fayetteville, Ark., especially given the woeful state of the Razorback track program in the early 1970s. But one look and the course was set, writes Maloney.

“Ellen remembers the glow in John’s eyes when they visited Fayetteville … ‘He really liked it here because he thought it reminded him of Ireland,’ (she) said.”

The bulk of the book, 375 pages, details McDonnell’s creation of the school’s track program from laughingstock to a program of such dominance, it likely will never be equaled. Each phase of the journey — from origins through its halcyon days — includes insight into the athletes who entered the system and the struggles many of them had to live up to the demands of the sport. It is here that the book shines.

Speaking to Arkansas Catholic, McDonnell said the book was two years in the making and given the number of supporting interviews Maloney has collected it is easy to see why. Those quoted in the book — sometimes poetically, sometimes in the vernacular of a locker room, but always authentically — range from the well-known such as former Arkansas athletic director Frank Broyles and former president Bill Clinton, to those who are obscure to all but the most devoted followers of the track program.

As for McDonnell, he expressed satisfaction with the work and even hinted that another book would be forthcoming, but perhaps not immediately.

“People at the university encouraged me, saying people need to know this story,” he said. “I enjoyed the process and received many compliments on it. But it was an awful lot of work.”

McDonnell, a member of St. Joseph Church in Tontitown, also said time will only continue to prove the greatness of those teams and the soundness of strategy and training principles used to mold them. He said even as technology continues to advance, it can only augment the fundamentals of coaching, motivation and leadership.

“Way back in the beginning, we had an idea that this is what it takes to make a championship team and it worked, “ he said. “We had a very sound system and we won on a consistent basis.”

The 401-page book is available from the University of Arkansas Press.