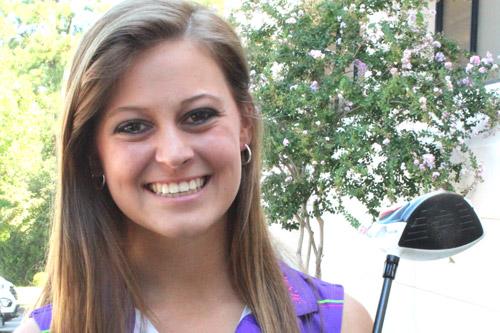 Dwain Hebda
Taylor Loeb, 16, poses outside Mount St. Mary Academy in Little Rock. The sophomore phenomenon is picking where she left off as a freshman in junior golf circles.

Dwain Hebda
Taylor Loeb, 16, poses outside Mount St. Mary Academy in Little Rock. The sophomore phenomenon is picking where she left off as a freshman in junior golf circles.

“I bring her Gatorade and snacks,” she said, disintegrating into a laugh. “I mean, in 22 years, she’s the best I’ve ever had. I’m learning from her.”

Loeb, a member of Christ the King Church in Little Rock, is one of the biggest things to happen to girls golf in a long time, especially at MSM. A bona fide prodigy, Loeb first picked up a club at age 3 after watching her father Brian hit balls in the backyard. At age 7 she played in her first tournament through The First Tee of Little Rock and the next year beat her dad for the first time. She still credits him with helping her into the game she loves.

“My dad always taught me the importance of not being nervous, just keeping my cool and focus.” Loeb said. “If I hit a bad shot, just forget about it and play my game.”

Loeb graduated to being coached by Little Rock pro Chris Mayes, who honed the mechanics of her natural swing. As an eighth-grader at Christ the King School in Little Rock, she fired a 72 at Conway Country Club that not only won the tournament, it beat everyone in both the boys and girls divisions.

“I used to get really mad at myself and it threw my focus off,” she said. “I didn’t understand the mental side of the game. But now I know that I play a lot better if I don’t get mad.”

Loeb’s unflappable demeanor on the course is more than a byproduct of her success, it is elemental to her game and indicative of an ability to control that which she can and letting go of what she can’t. For instance, she isn’t as long off the tee as other competitors so she concentrates on accuracy and a killer short game rather than curse the fact she hasn’t yet achieved maturity of size and strength.

“I strategize each and every shot, but it’s quick thoughts,” she said. “I know I’m going to play on the safe side most of the time. I’d rather lay up and be OK with a bogey than get a double bogey.”

“She handles herself on the course so much better than a lot of golfers her age,” Lenggenhager said. “There are seniors who still get frustrated so easily. Taylor is really advanced in that area.”

Loeb also demonstrates a remarkable single-mindedness when it comes to golf.

“During the summer I like to play every day, or at least every other day,” she said. “That’s kind of hard to do during the school year, so I have a chipping green in the backyard and I chip for 30 minutes every day. It’s a good stress reliever.”

Loeb, who achieved all-conference, all-state and All Arkansas Prep status as a freshman, has dominated thus far as a sophomore. She’s got her sights set on a state high school title before she graduates, as well as to medal in every match the Belles enter this year.

She’s also looking forward to the summer and a return appearance on various all-star squads, representing Arkansas against junior golfers from other states. Last summer, the AWGA’s Arkansas contingent beat squads from Louisiana and Mississippi and the ASGA’s co-ed team was second to Oklahoma while beating teams from Mississippi and Missouri.

Loeb’s long-term goals include golfing at the collegiate level and then as a pro. It’s clear that while she’s having a ball on the course, golf is still serious business.

“When you play golf you gain a lot of confidence in yourself. You learn to persevere and you always have honesty and integrity. If you don’t have that, then why play?” she said. “But you also have to have fun. If you’re not enjoying it, it’s a really difficult sport.”