Brother Adrian Strobel has dominated his classification for nearly 40 years 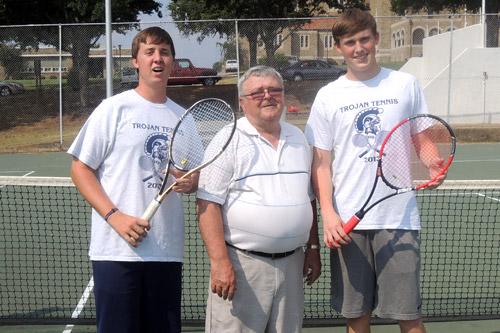 SUBIACO — Ask a cross-section of Brother Adrian Strobel’s tennis athletes what’s core to the old coach’s program and you’ll likely get a variety of answers. Ask the man himself and one thing immediately pops to the surface.

“They better be respectful,” he said. “I told them if they use foul language on the court or, you know, if you throw a racket or something that’s detrimental to the school, I will go out there and pull you off of there. We’re not going to do something like that and I haven’t had to do that. I’ve never had to go out there and pull a kid off the court.”

It hasn’t been a whole lot more complicated than that during Brother Adrian’s tenure as Subiaco Academy’s tennis coach, a position he has held with distinction since 1974 when the incumbent quit late in the season and the headmaster came knocking.

“The first year we only played one match, because it was late in the season when he asked me,” recalled Brother Adrian. “I called around and there just weren’t a lot of people who wanted to play tennis. And so I called Russellville and they said yeah they’d be happy to play us.” (Subiaco won, by the way.)

“The next year, I still didn’t have much success finding matches; we played in two or three. After that it got rollin’.”

Young men have been running the court at Subiaco since at least the 1930s, but never in such a dominating fashion as under the homespun guidance of the 69-year-old Benedictine and Subiaco alumnus who grew up on a dairy farm about a mile from campus. In 39 years, he’s produced 12 state champions — 10 of them doubles teams, the latest of which won this season — and 35 district doubles and 23 district singles champs.

The Trojans also have 32 conference titles; it’d be even more except the conference didn’t exist for the first four years or so of the Strobel era. Put another way, he’s won conference 32 times in 35 tries.

“One thing where I had success, and still do right now, is I put my good players in doubles where most other schools put their good players in singles,” he said. “I saw I could counteract those people by putting mine in doubles. If I get two good doubles teams, I can win quite a bit.”

The notion flew in the face of a sport where attention is heaped upon the individual, but Brother Adrian was audacious enough to stress team first and it worked from the start.

To help ensure seniors are ready to bear that responsibility, Brother Adrian keeps the roster at 12 players every year not to limit the participation of younger players, but, in fact, just the opposite.

“Twelve is really the maximum that you can handle, and I don’t have an assistant coach or anything,” he said. “We have four courts and if you have any more, people have to sit around and I don’t like kids to be sitting around. If they’re on the team, they’re going to play.”

He can see a day when he won’t coach, but for now, all he sees is the potential for next year. He’s slowed a bit and he doesn’t play against the kids like he did before his shoulder started giving him problems, but the competitiveness is still there.

“I play very seldom now because I can’t serve anymore, my shoulders won’t let me do it. But I’d love to get out there and do it,” he said.

“I had two this year who could have been our second doubles team, but they couldn’t play because they were eighth-graders. But I got ‘em for next year.”