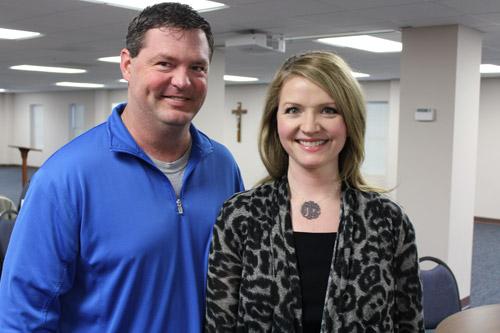 The impact of Pope Francis’ papacy, the so-called ‘Francis effect’ applied to everything from approval ratings to Mass attendance figures and weekly contributions, is also playing a role in the conversion of people seeking to enter the Church as well as those helping to prepare them.

That’s the feedback from several parish Christian initiation coordinators and RCIA candidates, as they put the finishing touches on preparations of this year’s group of new Catholics.

“I absolutely hear that,” said Greg Donaldson, who oversees the RCIA program at Christ the King Church in Little Rock. “Pope Francis’ engaging and open style gives many candidates a totally fresh perspective. It’s what makes many of them want to take a new look at the Catholic Church.”

Donaldson said the impact appears to be particularly significant among converts from what he called, “Bible churches” as well as a healthy number of lapsed Catholics looking to pick up their faith where they left off.

“Pope Francis strikes a chord with those people who were raised Catholic. He gives them a new outlook on the Church and he makes them feel welcomed back.”

Sue Erb, RCIA coordinator at St. Mary Church in Siloam Springs, said the pope’s popularity has resulted in families coming in as a unit this year, doubling the number of individuals studying for conversion from last year. She said the pontiff’s message, along with the use of expanded media to broadcast it, is making an impact.

“Things like Relevant Radio reach a lot of people and once they hear him, they appreciate what Pope Francis is talking about,” she said. “In class, it isn’t a constant topic, but people regularly bring things they have heard the pope talk about into the discussion.”

One of those families, the Weibergs, are a prime example. Brian Weiberg said ever since he and his wife Heather were married in 1998, he sensed something was missing from the churches they attended, but the Catholic Church was not on the radar. That began to change when he stumbled onto the Relevant Radio program, “Go Ask Your Father,” and by the time the historic, real-life drama of Pope Benedict’s retirement and Pope Francis’ election rolled around, the pull to become Catholic was pronounced.

“It wasn’t long after Pope Francis was elected and much prayer that I knew I had to tell my wife that I was looking into Catholicism,” he said. “We started reading the Holy Father’s tweets and weekly writings, and we started to realize that this is where we needed to be. We had questions so we called St. Mary Church in Siloam Springs and (were) encouraged to ‘come and see’. I read the Holy Father’s encyclical “Lumen Fidei” in June 2013, and his beautiful writing sealed the deal.”

As the Weibergs prepare to enter the Church along with their eldest daughter Rebekah — their two younger children Leah and George were baptized in July — Brian said the pope continues to be a source of inspiration and guidance through Twitter and other media.

Traci Willis, who with her husband Tim and sons Hunter and Dustin will enter the Church as members of Christ the King Parish in Little Rock, said the family had already decided to become Catholic for other reasons in June, but that their decision to convert has been reinforced by the pontiff.

“I’ve had a high opinion of what I knew of the previous popes, but (Pope Francis) brings a sort of down-to-earth aspect to the papacy,” she said. “The simple living, the being willing to approach people with illnesses and touch them; he’s just very approachable. I don’t mean to take anything away from anyone previously, but he just has that quality that kind of makes Christianity and Catholicism accessible to everyone.”

Debi Snyder, adult formation coordinator at St. Vincent de Paul Church in Rogers, said with the overall image of the Church on the rise, new material and unfamiliar doctrine is in general more easily absorbed by candidates.

“I don’t think we can attribute everything to him; no one’s said, ‘Pope Francis said this and that’s why I’m here,’” she said. “But overall, the pope has given people a fresh outlook. The things he says and does dispels a lot of misconceptions up front.”

Snyder also said another positive impact the pontiff has had on the RCIA process is how he has energized sponsors and educators, something Erb echoed.

“His reverence, his willingness to change things and his emphasis on evangelization has given me a new perspective to do the best I can,” Erb said. “I’ve had a lot of tribulation over not feeling worthy to do this work. Pope Francis has given me the insight that you don’t have to be perfect, you just have to be willing to try.”