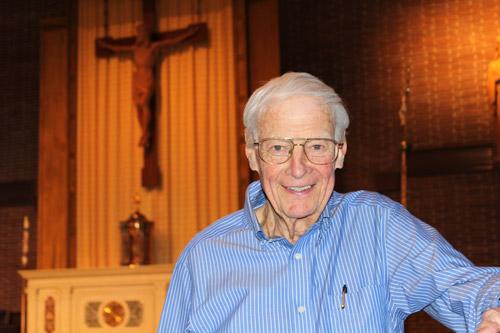 Dwain Hebda
Msgr. John O’Donnell is pictured in the St. John Center chapel. The 86-year-old Pennsylvania native marked 60 years in the priesthood May 27.

Dwain Hebda
Msgr. John O’Donnell is pictured in the St. John Center chapel. The 86-year-old Pennsylvania native marked 60 years in the priesthood May 27.

Msgr. John O’Donnell — who observed the 60th anniversary of his ordination May 27 — has lived enough Catholic, diocesan and secular history to make a movie. But, as the 86-year-old himself said, “Who’d believe it?”

An athletic youth from rural Pennsylvania born to Irish immigrants, Msgr. O’Donnell dreamed of adventure early, but world events didn’t cooperate as World War II ended before he could get out of high school. The priesthood, especially in Arkansas, seemed like the next best thing.

“The nuns who taught us were always talking about vocations,” he said. “In high school, the priests would tell us, ‘Be a priest, go on a mission, spill your blood, be a martyr.’ So, I did.”

Little Rock wasn’t exactly Gua­dalcanal, but the summers came close and riding in by train from the East Coast with 40 other like-minded men created the camaraderie he’d envisioned in uniform.

If Msgr. O’Connell had thrown in the towel, it wouldn’t have surprised anyone back home. His parents, Henry and Bridgett O’Donnell, weren’t opposed to his vocation, they just didn’t think there was much chance he’d actually do it. They said he didn’t fit the mold of pious man of the cloth; they wouldn’t be the last to underestimate him.

“Oh yeah, I dealt with that ‘damn Yankee’ stuff,” he said. “I grew up in Pennsylvania, you know, Gettysburg and all that, but I didn’t care about the Civil War. It meant nothing to me. I got down here and found out these southern guys took that seriously.

“We used to have a North-South football game in the seminary and they finally had to cancel it because of all the fistfights.”

Bishop Albert L. Fletcher had barely blessed his hands with chrism oil when he was sent to St. John Church in Hot Springs as associate pastor. Following that short assignment, he attended Catholic University in Washington for a year, then spent the next five teaching at Catholic High School in Little Rock and maintaining “priest in residence” status at Our Lady of the Holy Souls and Our Lady of Good Counsel churches in Little Rock and St. Patrick Church in North Little Rock.

From there, he was assigned to Holy Cross Church in Crossett and with it, responsibility for three counties, an expanse of more than 3,000 square miles. Social change started to push into Arkansas and more than a few locals pushed back.

“Ah yes, the Klan,” Msgr. O’Donnell said. “They weren’t just the stuff of movies, it was spooky there for a while. They never bothered me for some reason; maybe they thought I was connected back east or something.”

His scenery changed with subsequent assignments to St. Peter Church in Wynne and St. Joseph Church in Pine Bluff, but the challenges followed. He brought the changes of Vatican II to his congregants, reached out to other churches to promote common understanding and marched in favor of integration in Little Rock. He gained a reputation for speaking his mind, sometimes pointedly, sometimes employing a droll sense of humor.

“The best part of being a parish priest is being among the people,” he said. “If I had any talent at all, it was the ability to relate to people. I just really liked being around them.”

He spent the last 20 years or so of active ministry at Immaculate Conception churches in North Little Rock and Fort Smith. He retired in 2006, but no one noticed, thanks in part to the level of activity he has maintained since. He was part of the vocations office and now still often fills in celebrating Mass for sick or vacationing priests.

He resides at St. John Manor in Little Rock and walks among the massive pine trees he helped plant as a seminarian. He receives visitors from previous assignments and is embraced wherever he goes.