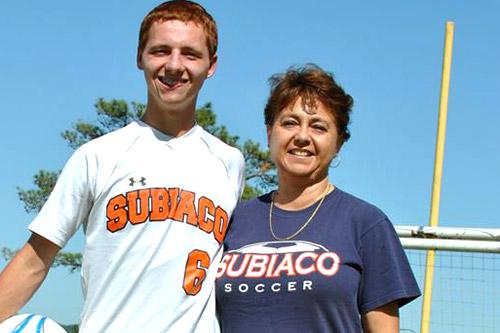 Annette Dunham, head coach of the Subiaco Academy Trojans soccer team, poses for a photo with her son Daniel, a player on the team and a member of the graduating class of 2014.

Annette Dunham, head coach of the Subiaco Academy Trojans soccer team, poses for a photo with her son Daniel, a player on the team and a member of the graduating class of 2014.

That guy might not have stuck around long enough to take his medicine, but ask anyone else who ever tested Dunham’s mettle and they will tell you: The rules on a Dunham team may be simple and relatively few but if you are going to play for her, they are inviolate.

“The biggest thing I tried to do this year was make the players accountable to the team,” she said. “It’s something I stressed over and over. This is what a team does and if you choose to do something that hurts the team, you have to make up for it.”

Dunham’s straightforward philosophy led the Trojans to a 13-2 record, losing just one game in the regular season and winning the first conference title in recent memory. The international team — with players from the United States, Mexico, South Korea and Canada — also advanced to the second round of the state 4A tourney where they lost a 2-1 heartbreaker to defending state champ Valley View. Three players earned all-state status; six more were also all-conference.

At the center of it was Dunham, a member of Holy Redeemer Church in Clarksville, where she and her husband John raised three children, Joshua, Sarah and Daniel. Both boys graduated from the academy and shuttling to and from their activities made her a familiar sight on campus, which proved a double-edged sword when she accepted the head coach position.

“Most of the kids knew me; they called me ‘Mom’,” she said. “Being a boarding school, the local parents become second parents to a lot of the kids. I actually had to tell them, like I told my kids when I coached them, ‘When we’re out here, I am the coach.’ It was hard for some of them to appreciate that.”

The small-school psyche is a strange thing. Mishandled, it’s a bankhead of inferiority complex that mentally defeats a team before a game even starts. In the right hands, however, it creates the us-against-the-world chemistry that drives a team to outplay even the most outrageous expectations. Which the 2014 Trojans would ultimately adopt was very much in question when Dunham opened the first practice.

“There was the attitude of, ‘We know you and we can respect you, but we’re not sure how much you know about soccer,’” she said.

As a result, Dunham heard a lot of “why’s” off the start, something that came with following a popular coach, former Trojan Alex Borts who led the squad to the state tourney in 2013. For a time, she let those objections play, but ultimately it became the team’s first wake-up call.

“Coach Borts is a wonderful coach, but he is not here now,” she said at last. “I am not Coach Borts and so it’s me or no soccer.”

Not that Coach Dunham was flailing around on the pitch — the Arkansas Tech grad holds a degree in physical education and coached junior high and high school basketball, tennis and volleyball at several schools before staying home as a full-time mother. Even then, she volunteered to coach the Dunham kids in youth soccer, basketball, baseball, softball and volleyball.

She wasn’t even that much of an anomaly as a woman coaching a boys team, considering there was another, Cindi Vasquez, in Danville, a squad Subiaco played twice. The second of these contests was substantially more significant than the first as it brought the Trojans face-to-face with the hardest lesson of the season.

Undefeated late in the year, three of the team’s starters missed practice without cause and then failed to complete Dunham’s requisite 100 drills to reinstate themselves. Although they made it in to the game later (having done enough drills to play part of the contest) Danville prevailed 2-1. For Dunham, the decision was simple and it still is.

“It wasn’t punishment. Those were the rules, and it was just me standing by what I said,” she said. “There were bigger things at stake. You can’t go out into the real world and just not show up.”

With a highly successful first season under her belt, Dunham has agreed to coach again next year and in so doing will bring the program something it hasn’t had in some time — a measure of stability. Prior to her, the Trojans burned through three coaches in four years.

“It’s different here, it’s a challenge,” she said. “You’re constantly adjusting to personnel because some boys graduate, some go home and don’t return and new ones come here to school. In some ways you’re dealing with kids who have had to become adults ahead of their time. Most other times, though, they’re just incredibly dedicated kids who love soccer.”

Did you or your child accomplish something special in sports? Share the good news through “News & Views from You” on www.arkansas-catholic.org.