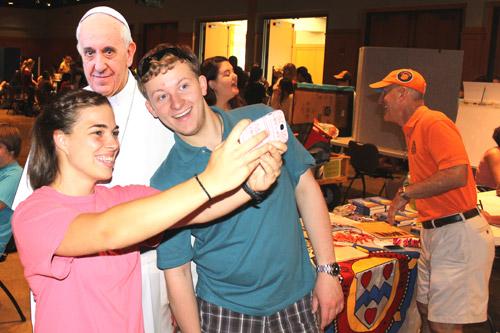 CONWAY — There’s little in common between the University of Central Arkansas and Hendrix College in Conway save a zip code and the growing Catholic Campus Ministry movement.

The organization, with members spanning both campuses as well as Catholic college students from Conway attending school in nearby Morrilton, Little Rock or elsewhere, is enjoying a boom in numbers and enthusiasm.

“God has really blessed us. It hasn’t all been peaches and cream; there were a lot of days in the desert where you’d ask ‘What am I doing here?’” said Deacon Richard Papini, director. “This is the Lord’s ministry; God wanted this ministry to happen.”

When Papini landed on campus in 1999, attendance at the group’s weekly free lunch — a staple of campus ministries — averaged about 30. Mass attendance wasn’t much better, 10 college kids standing around a ping-pong table. Today, lunch crowds of between 150 and 200 are common and the first Mass of the current term was standing room only at the group’s meeting house.

Papini is joined this year by Kasey Miller, a native of North Carolina, who was hired as full-time campus minister. Her arrival on campus was timely: During welcome week activities at both UCA and Hendrix, where campus groups make themselves known to incoming freshmen, more than 200 new students signed up, a record.

Chance Keith, a member of St. Mary Church in Paragould and a UCA junior, said contrary to what many people think about college students’ priorities, many still want to maintain a strong faith life and that, combined with this population’s hunger for inclusion, makes CCM an attractive option.

“College life can be confusing for freshmen,” he said. “There’s so much hitting them at once that they really like familiarity. Even the kids who aren’t super-involved see the Catholic Church for the family it is.”

While the number of signups has grown, for Conway’s student leadership it’s little more than a good start.

“It’s a good feeling, but at the same time I don’t just want to see a bunch of numbers on a page,” said Holly Hambuchen, a UCA senior who grew up in nearby St. Joseph Church. “It sets the expectation higher. Now we have to go and serve these people.”

Hambuchen’s tone underscores how seriously the student leadership takes the success of the CCM. This year’s leadership organized their own planning retreat over the summer, spending several days defining who they wanted to be as an organization and how they planned to accomplish their mission.

“The events CCM does are for community building and having fun and that’s great because we all need a break,” she said. “But the real goal here is to help people meet Jesus in a new way.”

That goal is accomplished through student-led, small group Bible study, which has been a fixture of Conway CCM for a few years, but will for the first time this year be held in the dorms, further reducing barriers to students’ attendance. Each meeting, the study groups focus on a topic, discussing Scripture and how faith applies to everyday life.

The groups attract students of varying beliefs and devotion, according to Nick Baltz, a Hendrix College sophomore and member of Christ the King Church in Little Rock. He said participants fall into three broad categories.

“There are the hard-core Catholics who don’t really need us, but like making friends,” he said. “Second, there are the people who don’t know what they think. They generally don’t get involved and we very often lose them.

“Then there’s the ‘conscientious objectors’ who know what they think and are generally pretty insightful about it. Very often these are the people who, once they start learning what the Church is all about, experience a beautiful conversion.”

Branson Shaffer, a fifth-year UCA senior, was one such person. Raised Church of Christ, he tagged along with his Catholic roommate to a Bible study group during his junior year more out of curiosity than anything.

“They were really cool, really embracing,” he said. “I looked around and I thought, ‘Well, I haven’t seen anything super-Catholic yet.’ All I saw were these people who loved Jesus and loved the Bible, as I did.”

Shaffer said being a convert gives him an advantage when approaching other Protestants. He said even if he hadn’t shared their experience, the underlying attitude of the group disarms a lot of people because it focuses primarily on faith and secondarily on religion.

“Honestly, if at my first small group meeting we had dove right into discussing the Virgin Mary or something it would have scared me away,” he said. “There are a lot of people on campus who are hurting and lost. There’s a time to talk apologetics and doctrine, but to start, all they need to see is the face of Jesus here.”