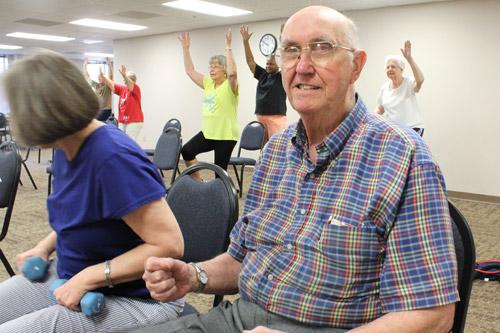 Dwain Hebda
Ken Eckert participates in exercise classes for seniors at Christ the King Church in Little Rock twice a week. Eckert stays active with daily Mass and volunteering at his parish and a local food pantry.

Dwain Hebda
Ken Eckert participates in exercise classes for seniors at Christ the King Church in Little Rock twice a week. Eckert stays active with daily Mass and volunteering at his parish and a local food pantry.

When Ken Eckert serves the poor it enriches his faith.

Once he was driving the Missionaries of Charity to feed the homeless under the Broadway Bridge in downtown Little Rock on a cold, rainy February morning and he brought an extra pair of size 12 shoes with him.

One of the men he gave food to had tattered tennis shoes with his toes sticking out.

“You look like you could use a pair of new shoes,” Eckert commented.

“If you don’t do anything, you will just rot away. … Make a little extra effort to do things you don’t want to do. I get a big joy helping others.” --Ken Eckert

“I sure could,” the man replied.

“What size do you wear?” Eckert said.

Another time Eckert grabbed an extra hat before he left his house to drive the sisters downtown. A homeless man approached and Eckert offered him a hat.

“Thanks and I want to thank you for the shoes,” the man replied.

Those stories still touch Eckert’s heart, but one story always stands out.

The Missionaries of Charity asked Eckert to ask a man off by himself if he wanted any food. Eckert will never forget what happened when the man turned around.

“That’s when I saw the face of Jesus.”

“It was an experience I have a hard time talking about … I still have tears,” he said. “It was almost like a reward or thanks for being there to help someone.”

Giving back to his adopted city of Little Rock and serving his parish of Christ the King Church fits naturally into Eckert’s week. Every weekday he attends morning Mass. On Tuesdays and Thursdays he participates in Sittercise classes led by senior ministry director Susan Baldwin. On Wednesdays he spends his morning interviewing clients who come to Helping Hand food pantry. Then on Fridays he volunteers at the parish bookstore.

“I feel some of my blessings come from attending morning Mass,” he said. “My daily routine starts off with attending Mass. … My story of blessings and energy may encourage others like myself that are in their later years of life to still feel the desire to serve others.”

Eckert, 86, got a late start to becoming a Little Rock resident and Catholic. He moved to the city in 1985 at the end of his career managing plants in Conway as well as Louisiana, Mississippi and Virginia. The New Orleans native and his wife Verna wanted to move back to Arkansas to be closer to their three children and grandchildren.

He converted to Catholicism in 1995 when he was 66 years old.

Verna “was the one who was very encouraging,” said Eckert, who was active in the Lutheran church. “She wanted to raise the kids Catholic; she was a cradle Catholic. She did a wonderful job raising our kids and I realized later in life it was much smarter for me to be involved with my family … I realized we both love the same Lord and he was real good to us. I wanted to participate more in my family’s life.”

The establishment of senior ministry at Christ the King is credited to Eckert. A year after his conversion he was walking past the office door of the former pastor Msgr. Gaston Hebert and the pastor asked him to start a ministry for seniors.

Eckert and his wife jumped in and planned monthly potluck dinner/bingo nights. Then he organized day trips to see local sites like the plantation in Scott and the Passion Play in Eureka Springs. As the group grew, he planned three-day trips to places like St. Louis and Branson to see the Christmas lights.

The ministry expanded again when he started the ROMEO (Real Old Men Eating Out) Club. Inspired by an article he read in Reader’s Digest, the group meets monthly for a short program and a meal provided by the parish. Annually the group honors a person or organization with an award.

In 2004 the parish opened a dedicated space for seniors, with a meeting room and small kitchen. Eckert, of course, was there for the dedication and pastor Msgr. Francis I. Malone asked Eckert to unveil the name of the center.

When he pulled the paper away, the sign read “The Ken Eckert Senior Center.”

“When I saw my name up there, I was excited at the time,” he said. “I was dumbfounded.”

Baldwin, the senior ministry director, said Eckert is the most welcoming, supportive leader. When planning a birthday party for Msgr. Malone, Eckert was the one who wanted to get an outline of the steps needed to host the party, she said.

“There is a reason why it’s named the Ken Eckert Center. He is the heart and soul of the senior ministry,” she said. “When Ken is involved in something, he always has the ability to get other people involved … He has quite a following.”

Eckert hasn’t slowed down since he retired in 1989, even when his wife of 56 years died of cancer in 2007. When he is at home, he has a black Labrador named Jake to care for.

“If you don’t do anything, you will just rot away. … It is important to stay active,” he said. “Make a little extra effort to do things you don’t want to do. I get a big joy helping others.”

SEE MORE PHOTOS related to this story at Arkansas Catholic's Zenfolio page, and order prints if you like. You also can browse other photos taken by Arkansas Catholic photographers.
Click for the Senior Living index