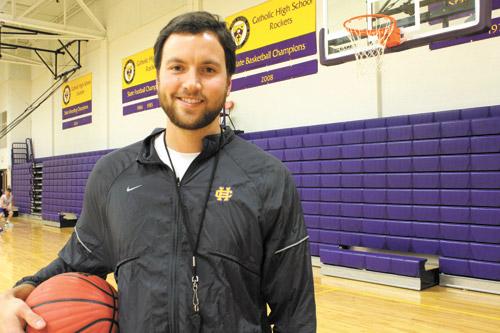 Dwain Hebda
Michael Drake, coach and teacher at Catholic High School, pauses in front of the banner marking the school’s lone state basketball championship. Drake was a junior when the Rockets won it all in 2008.

Dwain Hebda
Michael Drake, coach and teacher at Catholic High School, pauses in front of the banner marking the school’s lone state basketball championship. Drake was a junior when the Rockets won it all in 2008.

Michael Drake, Catholic High School class of 2009, is Rocket basketball royalty. There’s no shortage of reminders of that at the Little Rock campus, from the team photo in the hallway to the banner on the gym wall to the current basketball team running through their afternoon paces.

“He’s fun to watch play. I’ve watched him since he was in high school,” said junior Chad Wharton, a two-year starter at point guard. “He’s a really chill guy. He knows what he’s talking about as far as basketball goes. He’s really smart and he’s good at what he does.”

Just six years removed from high school, the solidly built 24-year-old Drake is taller than the skinny schoolboy in the 2008 state championship photo, but his still-boyish features don’t look that far removed from the teenagers dribbling and sprinting in all directions around him. At least not to other adults.

“It’s really funny, it’s like (students) have no gauge of age,” Drake said. “I tell them that I graduated in 2009 and they still think I’m 30 and have two kids. They just think cause he’s a teacher, he’s old.”

It’s been about 18 months since Michael Drake came home to the biology classroom and the Rocket bench. Even in such a short time, his impact as assistant varsity coach and head junior varsity coach is being felt.

“He’s helped me a lot on the offensive end,” said senior guard William Hancock, three-year varsity starter. “I was just a hustle guy, a lot of defense, but especially last year he helped me with my movement without the ball and helped me get open for a lot of shots. His experience really helped.”

“(Coaching and teaching) has been a very interesting and fulfilling experience,” he said “I’ve gained so much experience dealing with people of all ages, the boys as well as their parents. I also work with faculty members who taught me. It’s really cool to be around those other teachers now as friends.”

For Drake, a member of Christ the King Church in Little Rock, basketball and biology was always a two-phase plan for the future: Basketball would help pay for college via a scholarship to Christian Brothers University in Memphis, and biology would take it from there.

The basketball part worked out all right — he wound up Gulf-South Conference’s Freshman of the Year and after a relatively quiet sophomore campaign, blew up as an upperclassman. His junior year, the Buccaneers were runners-up at conference and NCAA Regionals.

As a senior, he led the team to only its second conference title and ended the year in the NCAA tourney. He was the team’s leader in scoring, points per game, offensive rebounds and field goals made, shot 73 percent from the line and was second in overall rebounds, assists and blocked shots. All-Conference first team, NABC South Region All-District first team and Reese’s Division II All-Star honors followed.

But when he was offered the opportunity to teach at his alma mater, he quickly discovered a side of academics he didn’t know existed. From preparation to the delivery of his 45-minute class, he described his initial months at the head of the room, “a wakeup call.”

“That first year was a lot of trial and error. It was probably the biggest learning experience I’ve ever gone through,” he said.

Coaching was much the same story. Like a lot of natural athletes, Drake the player had an intuitive feel for the game, so the longest step he ever took was from the middle of the action to the bench where he could no longer put his hands on the ball in the clutch moments. From now on, he was only as good as he inspired others to be.

“I think characteristics a good coach needs to have include the ability to trust in your players, but also be able to motivate them to play (for you). And those are the things I try to work on.”

“I see the game so much differently now, from watching and learning through experience. It’s something where I’ve loved every single minute of coaching, but it does take a lot more work to walk guys through what you want them to do than to just naturally get out there and do it as a player.”

Drake said he’s yet to come face-to-face with a kid who reminds him of himself, although he’s seen at least one specimen who’s a dead ringer for each of the classmates he used to run with. Having lived through their adventures the first time, he’s a better-equipped mentor for the latter-day versions. Some things, he said, just don’t change.

“A lot of these guys went through the same parochial school system I attended and so I understand the mindset of the kids in the class,” he said. “A lot of them have the same interests and aspirations I did. I don’t know if that gives me an advantage, but I can definitely relate to them. ”