Sidler: I wouldn't be 'doing this without her prayers’ 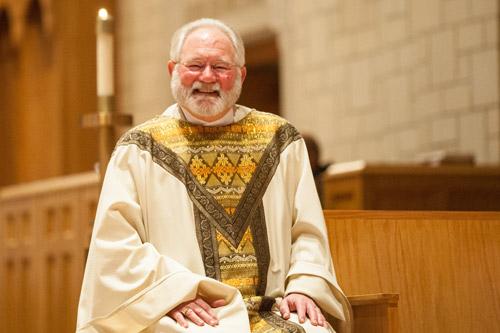 Karen Schwartz
Father Jack Sidler, who will turn 71 on Jan. 11, is the only diocesan priest who is a widower. His wife, Dee, died from cancer in 2008.

Karen Schwartz
Father Jack Sidler, who will turn 71 on Jan. 11, is the only diocesan priest who is a widower. His wife, Dee, died from cancer in 2008.

Family: The late Joseph and Cora Sidler, two sisters (one is deceased) and one brother. Three children and five grandchildren

Father Jack Sidler Sr. has taken several important oaths in his life: to the military, to his wife of 44 years and on Dec. 20, to God in service to the priesthood.

At 70, Father Sidler was the oldest seminarian at Sacred Heart Seminary in Hales Corner, Wis., and was ordained a priest Dec. 20 at Subiaco Abbey.

But his road to the priesthood has had many detours. As a child growing up in a Presbyterian home in Van Buren, Father Sidler said he felt called to ministry in the Presbyterian church, but there was little support and not an active vocation program. He instead joined the Marine Corps Reserve at 17 and a half years old, before his senior year in high school. He graduated on a Friday and was off to California to serve that Monday. Throughout his nine years of military service, including time in the Arkansas Air National Guard, he enjoyed serving stateside as an infantryman, combat photographer and later a photo processing specialist.

“(I enjoyed) just framing a picture and doing the work in the dark room and seeing the photographs come to life,” Father Sidler said.

While serving and working at a newspaper in Fort Smith, he met his future wife Dee, a cradle Catholic.

“I said, ‘Would you marry a non-Catholic?’ She never really did answer me,” Father Sidler said. “I really enjoyed the ceremony, the reverence and the concept that Jesus Christ is present in the Eucharist. In the Presbyterian church it’s just symbolic.”

Father Sidler joined the Catholic Church on May 1, 1964, and married Dee a month later.

“I had an occasion to go back to the Presbyterian church for a wedding. There was no Eucharist, no tabernacle, no living Christ in that church. That’s what I was searching for that presence of Christ in my life,” Father Sidler said. “I can pretty well sum that up and say that’s what really attracted me to Catholicism.”

The couple went on to have three children, who all attended Catholic schools and made sure to attend Mass every week as a family. Their home parish was Immaculate Conception in Fort Smith and later, Sacred Heart of Mary Church in Barling.

“I don’t want to say we were religious with set prayer times, but we were active in the church community,” Father Sidler said. “Our faith was part of our life; it wasn’t something outside of our life.”

And it was faith and trusting in God’s will for their marriage that kept the couple strong.

“We had a very good marriage, and I was happy in our marriage and she was happy. It was not angelic, that’s not what I’m saying. We had our ups and downs, illnesses, doubts and fears, but we trusted each other and we loved each other,” Father Sidler said. “It’s a matter of placing your trust in God that’s where he wants you to be; in turn that brings love.”

That trust and strength was put front and center when Dee was diagnosed with lung cancer in 2005. She had rounds of chemotherapy, radiation, clinical trials and surgery to combat the disease.

“She couldn’t eat, she was dehydrated.  They had her attached with infusions of liquid vitamins,” in the hospital. “That’s how we spent the night of our 43rd anniversary. I went to the gift shop and bought electric candles, a chocolate cupcake and a card,” he said.

The last three months of her life, Dee was bedridden and attached to pain pumps, with Dr. Joseph Chan – who later became a diocesan seminarian who will be ordained in 2016 – at Mercy Hospital Fort Smith as her quality care physician. She soon was put under hospice care.

“I really got upset because we had been praying all of this time that she’d be cured and be well. I said to God, ‘OK, I want to know what I should pray for.’ The Holy Spirit said to me, ‘Pray for a peaceful death.’”

“Her death was extremely peaceful -- no pain, no final terror or fear; I thank God for that,” Sidler said.

Remembering a conversation the couple had before Dee died, Father Sidler said he believes that God was preparing him for his next phase of Christian life – the priesthood.

“One time we were sitting there talking about what was going to happen. I said, ‘You cannot die because who will I love?’” Dee laughed and said, “‘Jack you’ll find somebody to love.’ I don’t think either of us was seeing the priesthood as what we were talking about but that’s what has happened.”

Though his three children were supportive, one son, Jack Jr., wanted to make sure his father was joining the priesthood for the right reasons, not because he missed their mother. But Father Sidler knew his calling was clear.

“I said, ‘God I don’t handle subtle well; if you want me to do something you’re going to have to tell me. I looked up at the altar at the Blessed Eucharist and it was as clear as day -- I knew I wanted to be on the other side of the altar and consecrate the body of Christ, hear confessions. I wanted to be a priest,” Father Sidler said. “I could be of service to people in a very special and unique way. I’m not blaming God, but there had to be a greater purpose of her (my wife’s) death than her just dying. By her death it freed me to say yes to God.”

Father Sidler entered the seminary on Jan. 13, 2011, two days after his 66th birthday, but the road was rough. His son Jeff was struggling from cancer, now in remission, and Father Sidler questioned where he should devote his time.

“I was spending a lot of money going to school, and I thought should I be back there with him?” he said. “I’d tell God, ‘You have to give me the strength to go on.’ It goes back to trusting God has you where he wants you to be.’”

Father Sidler remains close to all his children, especially his daughter, who lives in Fort Smith and provides her father with a place to stay on his days off.

Father Sidler said he feels called to pastoral ministry, chaplain work in hospitals and spiritual direction, but he will let God through Bishop Anthony B. Taylor make that call.

“I want to be able to help you and bring you closer to God. If I can do that God will take care of the rest of it,” Father Sidler said. “If God can use me to do that, that’s what I want to do as a priest.”

As Father Sidler moves forward in his priestly vocation, he remembers that conversation with his wife and knows in his heart how she feels about his new religious life.

“I think she would say you found someone else to love. In additional to, not in place of her,” Father Sidler said. “She would probably tell me to be humble, just not to worry about it, be who I am and do what God asks me to do. I’ll put it this way: I don’t think I’d be doing this without her prayers.”

Family: The late Joseph and Cora Sidler, two sisters (one is deceased) and one brother. Three children and five grandchildren