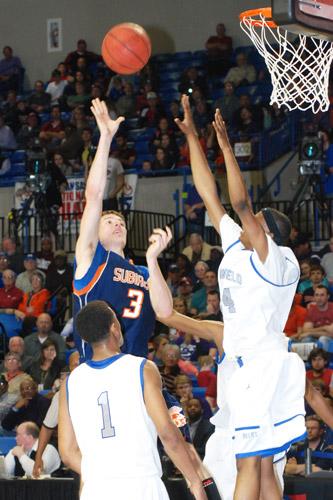 Senior Cash Krueger attacks the lane against Monticello in the 4A state final March 13. The four-year starter and two-time all-stater hopes to play Div. II college ball next year.

Senior Cash Krueger attacks the lane against Monticello in the 4A state final March 13. The four-year starter and two-time all-stater hopes to play Div. II college ball next year.

To understand how poorly things started out this year for the Subiaco Academy basketball team — the same team that on March 13 became the first Trojan squad to play in a state championship game — Coach Tim Tencleve points to an early season tournament.

“We were playing so bad that sometime in the third quarter I just sat down and Coach (Randy) Terry, my assistant, said, ‘What are you going to do?’” he said. “I said, ‘I’m gonna sit here real quiet and hope everybody thinks you’re the head coach.’”

“And he sat there a minute and he says, ‘Me and (assistant coach William Stehle) are going to go start picking up towels so people think we’re managers.’”

It’s funny now, but no one was laughing when the team stumbled to a 1-4 start or when they bottomed at 3-7. Even as their record leveled after Christmas, they didn’t look like world-beaters. But in late January, the squad started a run that would lead them places unknown to any team before them.

“We lost to Arkansas Baptist (in Little Rock) on Jan. 23, then won 12 in a row until we got beat,” Tencleve said. “When you think of how poorly we played at the beginning — the first semester was just atrocious at times — for them to turn it around and do what they did is really, really amazing.”

The Trojans’ tear included winning the 4A North Regional and easy wins over Hamburg and Dardanelle in the state bracket. That put them in the title tilt against Monticello, where cold shooting ultimately doomed them, 57-42.

Tencleve couldn’t quite pinpoint a particular game, scathing coach’s rant or extra running in practice turning the tide, conceding, “I would say there was all of the above; a meltdown was definitely part of it.”

One team captain said it all came down to trust.

“We were playing as individuals, especially on defense,” said Cash Krueger, a four-year starter. “We weren’t trusting each other at first, but once we all got the same mindset, we got it going. We became a brotherhood again, we became a family. When you have four other guys that you trust completely, it becomes pretty simple.”

The Texas senior embodies the Tencleve Way: A hard-nosed player who covets blue collar stats like taking the most charges and snagging the most rebounds. From his lead, the Trojans became a squad for whom hustle and desire became a calling card.

Tencleve has spent his 34 years in coaching crafting such teams. A native of nearby Scranton, he’s never coached anywhere but Subiaco Academy, 30 years of it at the helm. His style of play is reflective of the simple, work-of-our-hands life lived by the Benedictine monks that run the place and it works. Subiaco has made the regional tourney 23 of the past 24 years and advanced to state 15 times, reaching as far as the semi-finals.

“I do believe it all starts with defense. I think it defines the character of kids if they’re willing to do that,” he said. “We live in this fast-food mentality and me-me society where kids are taught from when they’re little to go get yours and it’s all about what you score and all that. It’s very tough to build a real team like that.

“Kids don’t go to bed at night thinking about playing defense, you got to instill it in them and to share the ball on the offensive end. This group bought into that as good as or better, probably, than any group ever.”

“There’s no secret (to playing for Tencleve) at all,” Walker said. “It’s just play to the best of your abilities. If there’s a problem, he always lets me know and he always tells me how to fix it.”

Of the final outcome, the pragmatic Tencleve said, “You can be a great defensive team, but you’ve got to score some to beat the really good ones.”

The loss smarts, of course, but perhaps not for the reasons you’d think.

“I always thought the reason I walked around in a funk like I had a hole in my gut for days was because of the last game that we lost,” he said. “I learned that’s not the case. It’s you parting ways with the kids that you’ve grown very close to.