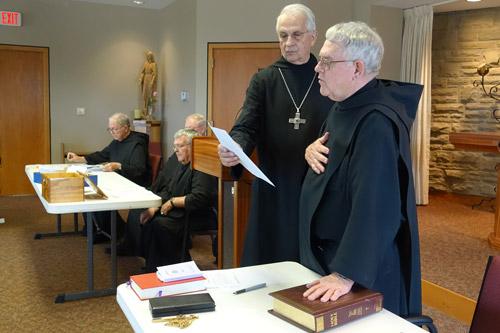 While visiting Subiaco Abbey for a weeklong summer camp, little Leonard Wangler, a boy of only about 12 years old, drifted off to sleep under the beating sun.

“I fell asleep under one of the trees out there. I looked up and saw the bell tower there out of the abbey, and it was a realization that this would be important,” he said. “How or to what extent I didn’t know; just that this would be something important in my life.”

Sixty years later, that young boy is now known as Abbot Leonard Wangler, OSB, elected as the seventh abbot of 137-year-old Subiaco Abbey when Abbot Jerome Kodell stepped down after 25 years of service.

There were 13 eligible monks out of 43 at the abbey that could have been elected during the secret-ballot election March 24. According to Church Law, abbots must be at least 35 years old and a priest with five years of perpetual profession. Because of the guidelines, Abbot Leonard, who has been the prior three years, was not surprised by his election.

“My fields were math and science so I could see the possibilities,” Abbot Leonard told Arkansas Catholic. “I knew I was definitely in the running. There were a couple other people that would make good candidates, but I guess it was several weeks ago really that, before I had time to reason all this through, it was almost a panic situation, but I got through that in a hurry. Things just sort of fell into place.”

As a prior, Abbot Leonard had to do all the preliminary work to proper for the election, such as passing out ballots.
“The person who ran the election is our abbot president” Vincent Bataille of Marmion Abbey in Aurora, Ill., Abbot Leonard said. “He’s sort of like an advisor to them, setting up protocols for everybody so they’d know what they were doing.”

The election included a scrūtinium, Latin for “scrutiny,” which allowed a candidate to make comments on each candidate as they left the room. It took less than hour, he said.

“It’s not a discussion, just to get ideas out there,” Abbot Leonard said.

His newest ministry as abbot is the next step in a long list of service to Subiaco. He was ordained a priest June 6, 1970. In the 1970s he served Subiaco Academy as a residence hall dean and a math, science and religion teacher. After earning his master’s degree in educational administration from St. Louis University, he was the dean of men at the academy in the 1980s and early 90s. From 1986 to 1988, he also served as academy headmaster and later as the interim headmaster from 2010 to 2011.

“We’re in a very fortunate situation because of what Father Jerome has done. He waited until after we were pretty much well finished with this fundraising” for the “Continuing the Tradition ... A Campaign for Subiaco” which raised millions for various projects, including health care for the monks and renovations of the academy, Abbot Leonard said. “I see myself more getting involved in thanking all of the people who were involved and getting everything back to where it runs smoothly here.”

While Abbot Leonard, 71, has been active at Subiaco since the 1970s, it was really his Catholic upbringing in his hometown of Fort Worth, Texas, with his parents and three siblings that prepared him for religious life.

“My father was a hard-working person. I don’t know if that makes us low or middle class, but he was a cloth cutter, which means he worked for a company who made outfits for rodeos, during the war they made uniforms, fancy western clothes,” Abbot Leonard said. “We were across the street from a Catholic school and church. We were familiar with the priest and everything that was going on there.”

Sisters of Charity of the Incarnate Word from San Antonio helped run the Catholic schools he attended as a child and later the Benedictines in high school.

“All the way through I sort of had the idea I’d be a priest. Whether there in the diocese or another order,” Abbot Leonard said. “It was more just involvement in the parish,” that solidified his desire to live a religious life. “I helped work in the rectory … I was an altar server.”

As a priest in Texas for about three years, Abbot Leonard said one of the most powerful experiences he’s carried with him was ministering to the dying.

“When I was first ordained one of the hardest things for me to do was to visit the sick and dying people in the hospital, but every time I left I felt better for it, it was a rewarding experience,” Abbot Leonard said. “I am the type of person who always needs to do something for someone, and I felt like I couldn’t help them. But just by bringing the sacraments to that person I was doing something for them.”

Throughout the years, in quiet moments away from his hectic work at the abbey and academy, Abbot Leonard could be found baling hay, feeding the cattle and working outdoors. He’s read every Louis L’Amour western novel, even finding spirituality within the pages.

“My favorite book by him, the one I’ve gone back to several times, is ‘The Quick and the Dead,’” Abbot Leonard said. “This one guy keeps coming in and out of this western man’s life to help … at one point I thought it was his guardian angel.”

As Abbot Leonard prepares for his new role which might mean a little less Louis L’Amour, he said he can assure his fellow monks and Catholics throughout the state that Subiaco will remain committed to education and religious formation.

“The monastery here at Subiaco will carry on and continue doing the fine work that’s been done before,” Abbot Leonard said.