New Catholic wants to help others get RCIA formation 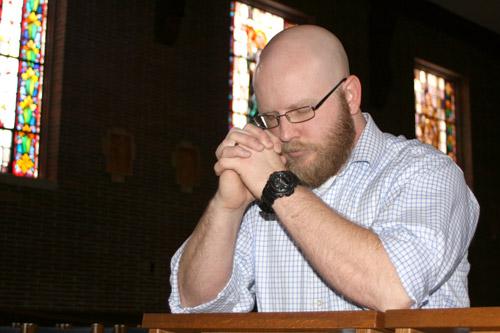 Aprille Hanson
Brett Carter, 32, prays in Morris Hall Chapel at the Diocese of Little Rock. Carter has been attending the RCIA program at the Cathedral of St. Andrew since New Year’s Eve 2013 and will join the Catholic Church at Easter Vigil.

Aprille Hanson
Brett Carter, 32, prays in Morris Hall Chapel at the Diocese of Little Rock. Carter has been attending the RCIA program at the Cathedral of St. Andrew since New Year’s Eve 2013 and will join the Catholic Church at Easter Vigil.

As a teenager, Brett Carter came to a life-impacting conclusion — God does not exist.

“It’s easy if you don’t want to acknowledge what control you have as a human in this world. To look at famine, to look at the immigration problems we’re having now which is really a refugee problem and say, ‘How can this happen if there is a God? There can’t be a God or else this wouldn’t happen,’” Carter said. “But you have to reach a point where you say, ‘This isn’t because of God, this is because of man, because of the things we do to deny God all of this exists.’”

And little did he know he’d find that realization while watching the 1999 movie “Dogma,” deemed blasphemous by the Catholic Church. Strangely enough, it brought him back to God who would one day set him on the path to becoming Catholic. Carter will be baptized and confirmed on Easter Vigil Mass April 4, becoming a full member of the faith at the Cathedral of St. Andrew in Little Rock.

“I’m looking forward to being a part of something bigger than myself,” Carter, 32, said. “It’s a global thing. It’s about being a part of that, along with the tradition and history of it all and following in the teachings of the man that Jesus sent out to build the Church.”

Even aside from being atheist for a while, Carter’s road to God has taken sharp detours. Though Carter’s parents were raised Methodist and Assembly of God, they stopped going to church after they were married.

“I was raised in a Christian family … We went to church intermittently,” Carter said.

His spirituality came from attending the Christian day camp, Family Farm, in Malvern where his mother was a camp counselor.

“It’s run by an Assembly of God family. I’d go there every summer growing up,” he said. “That’s basically where my faith started.”

But because of the “lack of real Christian foundation,” Carter said it was easy for him as a young teen to venture off into atheism. His “come to Jesus moment,” as he said, came at 17 years old watching the comedy “Dogma.”

“I sat down to watch this movie in all my atheistic glory thinking this would be entertaining,” Carter said.

The movie, starring Ben Affleck and Matt Damon, is about two fallen angels who hatch a plan to get back into heaven by passing through the archway of a Catholic Church celebrating its jubilee to overrule God’s authority which would destroy humanity. Damon’s character wants no part of destroying humanity and explains how God favored them, gave them free will yet they destroyed paradise and didn’t even acknowledge him.

“That was like getting hit in the face with a sledgehammer for me. Just years of denial and everything else, it was really, really overwhelming,” Carter said. “I really felt like that was a moment where God was speaking to me through the biggest form of blasphemy I’ve ever seen in my life. That’s kind of what turned things around for me.”

“I started going to church with her, got involved with the youth group and it really changed my life. It put me back on the right path and kind of gave me some sort of guidance,” he said.

The couple married in 2005 in the Methodist church.

“I never converted to Methodism. I tried, but the pastor didn’t seem too enthused with bringing me into the church because I had never been baptized,” Carter said.

However, he kept attending and is involved at Highland Valley United Methodist in Little Rock, even leading a girl’s youth choir with his wife.

“Going to the Methodist church was a really good foothold into Catholicism. And I don’t mean this condescendingly, but in a lot of ways Methodists are minor league Catholics,” Carter said. “The structure of the service is almost spot-on to a Catholic service.”

Carter said he appreciated the traditional nature of Methodists, a far cry from what he witnessed while sporadically attending nondenominational and Baptist churches as a child.

“Their sermons aren’t just telling you a story from the Bible and ‘You’re going to hell,’” Carter said. “It’s here’s how it relates to life and this is how you can use it in your life.”

That positivity wasn’t just at the pulpit. Looking back, Carter said one of his first Catholic encounters was visiting a priest at the Cathedral with his now wife, who was still in high school. She had to do a paper on a different religion for a class and asked the priest if the Church thought those in remote areas would go to hell for not knowing Jesus.

“He said, ‘No, not at all. We believe that people who have lived a good life and have tried to serve others have just as much of a chance of going to heaven as someone who was born and raised in the Catholic faith,’” Carter said. “It’s one of the things I like about the Catholic Church — you have so much respect for other faiths around you.”

Around New Year’s Eve 2013, he finally committed to joining the Catholic Church.

“I went to Mass and felt like I was home. You see so many different people from so many different backgrounds, races; we’re all there for the same reason,” Carter said. “It’s just amazing, the Cathedral, the smells, the sounds. It’s really humbling. You just can’t help but have the sense that you need to surrender.”

Despite coming to the RCIA program too late to join the Church at Easter in 2014, he still attended the classes and respected the fact that he never felt forced to join the faith.

“I really like the RCIA program,” he said. “I like that they want to educate you before they send you out in the world to represent them.”

Carter said the Catholic Church will take priority when it comes to attending weekend Masses, but currently he balances both attending Mass and Methodist services. His wife and two young children have attended some Masses.

“My wife is very, very understanding and respectful of this aspect of my life and so is her family. Her and her whole family of Methodists will be coming to Easter Vigil,” he said.

Aside from his wife’s family, Carter said his grandmother, known affectionately as Mimi, has also been supportive, as well as his parents.

“She’s a very devout woman. She spends about five hours a day at a table with four Bibles in front of her and Bible study books, she’s retired now,” Carter said. “She’s very excited about it now because I’m coming in it for the right reasons … For her birthday I got her a Catholic Bible. She was so excited, she wanted to look through all those books she always heard were banned,” he said with a laugh.

Though his long road to Catholicism ends on Easter Vigil, Carter will be walking his new path in the faith by becoming a sponsor in RCIA and possibly joining the Knights of Columbus.

“It’s a way to give back to what the Church has given me,” Carter said. “It would be very easy for the Catholic faith to say, ‘OK, you’re Catholic now.’ But that they have people that have taken time out of their schedules to help me build a foundation of faith, I’d like to be able to give that back to the Church.”