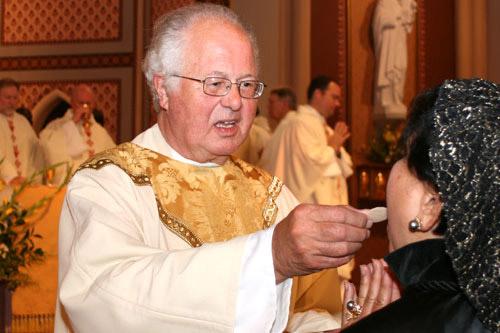 Aprille Hanson
Msgr. Richard Oswald offers Communion at the jubilee Mass held at the Cathedral of St. Andrew in Little Rock June 30. A priest for 50 years, he suggest-ed young seminarians focus on building their prayer life.

Aprille Hanson
Msgr. Richard Oswald offers Communion at the jubilee Mass held at the Cathedral of St. Andrew in Little Rock June 30. A priest for 50 years, he suggest-ed young seminarians focus on building their prayer life.

In 1964, the British rock band The Kinks, a favorite of Msgr. Richard Oswald, released one of their hit songs, “You Really Got Me.” Just a year later, a young Richard could easily alter the lyrics of the song and it would sum up his call to the priesthood — “God, you really got me.”

“It all has to go back to God. God used me in my priesthood, but I very much enjoyed being a part of that,” Msgr. Oswald said. “So I can’t take all the credit, but I can enjoy the blessings that God has given me.”

It was a long time coming, after he felt the stirrings of God’s call to service in the Church when he was around 13 years old attending Our Lady of Good Counsel Church in Little Rock with his parents and six siblings, he said. He and his older brother, Father John Oswald, both joined the priesthood.

“My parents always moved us, pushed us or urged us in the direction of service,” Msgr. Oswald said.

An alumnus of Catholic High School in Little Rock, after his ordination he was assigned to teach math and chemistry there. His brother was also a teacher there.

“So there were two Fathers Oswald. They called me Father Rick. I never was called Ricky, Rick or Dick, anything like that. It’s always just been Richard,” he said. “Anytime someone calls me Father Rick I know they were a student at Catholic High when I was there.”

Msgr. Oswald served at several Arkansas parishes, including St. Theresa and Our Lady of Good Counsel, both in Little Rock; St. Mary and St. Anne, both in North Little Rock; St. Vincent de Paul in Rogers; Immaculate Conception in Fort Smith; and St. Joseph in Conway.

When Vatican II Council changed the Mass from Latin to English, it was just six weeks after his ordination. Instead of preaching primarily on the catechism, priests were encouraged to give homilies on the Scripture readings.

“We were ready to go, go, go, get those council decrees out. It was exciting for me and something I enjoyed very much,” Msgr. Oswald said. “Reflecting on the lives of the people and trying to inspire them by something that’s relevant to their lives.”

In addition to parish work and teaching, he had several positions throughout the Diocese of Little Rock including the director of the Family Life Office and Little Rock Scripture Study. Most recently he was the diocesan director of divine worship.

On Jan. 2, 2009, Msgr. Oswald suffered an intraventricular bleed in the brain and credits prayer as to why he’s here today.

“They said my health started taking a turn for the better at that time, though they originally thought I had little chance to recover,” he said. “I can’t explain it, but I can almost feel all the prayers of people praying for me … I could just feel that power of prayer flowing over me from everywhere.”

Now a senior priest living at the House of Formation on the grounds of his home parish of Good Counsel, Msgr. Oswald spends his days listening to his vast collection of rock, bluegrass and Americana.

“I’m still a big fan of what I would call authentic music … most of the pop music today is mass produced by corporations. Over the years I’ve been to Austin City Limits musical festival numerous times,” Msgr. Oswald said.

The best concerts he’s been to have been the boss, Bruce Springsteen.

“I saw him before he really made it big; he played here in Little Rock at the Robinson Auditorium and there were only 600 people there,” Msgr. Oswald said.

Though Msgr. Oswald admits one of the biggest misconceptions about priests is that they “spend all their time on their knees in prayer,” it’s the advice he, after 50 years, has for the seminarians he lives with at the House of Formation.

“To spend a lot of time in prayer and then to learn how to appreciate one another and their differences,” Msgr. Oswald said. “When I think of when I first started, you were feeling your way sort of speak, apprehensive … and to look back now and just realize all the wonderful things God has done for me through the people of the Church … it’s just something really beautiful.”