Christ the King kids have shelter from the storm 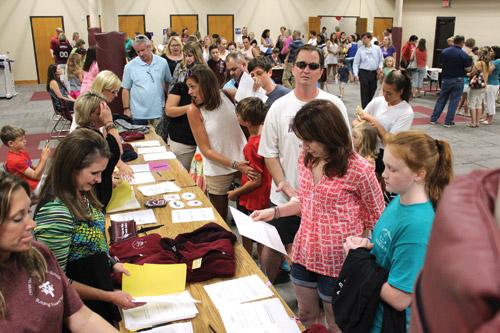 The din of the annual registration event was deafening as parents of Christ the King School in Little Rock stood in long, orderly queues awaiting their turn at various tables. Chatting with their peers, they made their way to purchase fleece tops and car magnets or to take note of the school’s volunteer opportunities.

Many clutched the year’s school forms in one hand and a child’s hand in the other; just as many left their children to their own devices to pass the time, huddled in twos and threes with their classmates. This was, after all, a safe room.

“I think it’s a great use of funds,” said Michael Tarini, a father of two students who headed the school board last year. “It’s like a community here and anything that can enhance it and draw more people in, it’s great.”

“Amazing. This safe room is incredible,” said Jana Hunter, second-year Christ the King parent with fourth-grader Elizabeth and kindergartner Daniel in tow. “It absolutely gives me 100-percent peace of mind.”

Similar assessments of the $2 million above-ground tornado safe room were expressed among the families and faculty in attendance Aug. 4. Though for the majority of parents, this was not their first registration night, it was their first opportunity to see the new multipurpose space and they took everything in with craned necks and widened eyes. They liked what they saw.

“The safe room is a huge plus,” said Melissa Smith, parishioner and mother of second-grader Sophia. “I think that the multipurpose is just fabulous. It’s a well-spent use of funds and will be used and the kids are going to be safe.”

Dressed in a maroon football jersey with her name in sparkly silver letters, the spritely principal Kathy House grinned from ear to ear talking about the new amenity unveiled in this, her 22nd year at the helm. She said doubling the space as an auditorium solves a much-needed facilities problem as well as provides shelter in bad weather or other campus emergencies.

“We’ve needed this space. The only place before now that I could put my entire student body was in the church or in the gym and that was it. I couldn’t even put them all in the cafeteria at once, it didn’t seat that many.

The space will also be used for indoor recess as well as school picture day, art shows, performances and other visiting groups.

“You can’t have too many programs in the church because it’s sacred space,” she said. “The gym is being used for P.E. almost every day all day. Now I’ve got a place that I can do programs.”

Of course, the fundamental purpose of the structure is for safety in weather and other emergencies, an upgrade to previous years where the best the faculty could do during a tornado event was scoot students into hallways — or even more harrowing, into stairwells in the case of second-floor classrooms.

By contrast, the 821-person capacity safe room is constructed to withstand 250-mph winds and, as a plaque outside the door notes, the various fast-moving projectiles of debris such a storm creates.

“We were in the middle of a capital campaign to expand out here and the Moore, Okla., tornado hit (in 2013),” House said. “It was after school that day; we were standing in this hallway and we could look out and see Monsignor (Francis Malone, pastor) coming over. He said, ‘We’ve got to build a safe room for these kids, we cannot let something like this happen here.’”

Even though the plans had already been drawn for the improvements to the parish — including work to the school entrance, cafeteria and classrooms — the safe room idea took on priority status. Planners drew it into a previously bare patch of ground and by May, the primary construction of the space was completed, with finishing work done over the summer.

Smith said the addition serves not only today’s student body but is a standout recruiting tool for attracting the families of tomorrow.

“When parents come and tour and they actually see it, this is something I don’t know if anyone else even has it in central Arkansas,” she said. “I really admire Monsignor for making this a priority. He specifically made the safety room a priority before we went on with other projects. I greatly admire and thank him for doing that and for putting our children’s safety first.”

Five reasons I sent my son to Catholic school, so should you