Buses headed to Philadelphia from central, western and northwestern Arkansas 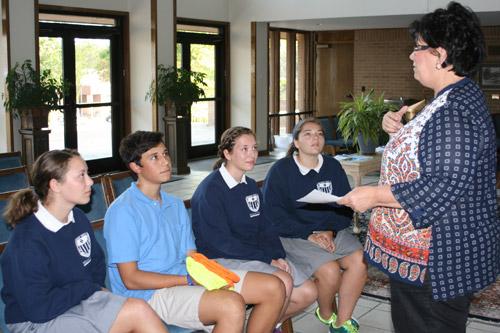 Why I want to see Pope Francis

The 12 seminarians in the House of Formation in Little Rock were each asked to write a short essay on why they want to visit Pope Francis in September. Seminarians Isidro Negrete and Tito Zarate wrote the top essays as chosen by Diocesan Vocations Director Msgr. Scott Friend and Assistant Vocations Director Father Ruben Quinteros. Click here to read the essays.

More than 200 people in Arkansas will start their pilgrimage this month to Philadelphia to witness history, as Pope Francis makes his first trip to the United States.

Buses from Immaculate Conception Church in North Little Rock, Christ the King Church in Fort Smith and St. Raphael Church in Springdale will make the more than 1,000-mile trek to see the pope, who will be in the states Sept. 22-27 in conjunction with the World Meeting of Families.

Pope Francis will be busy throughout six days visiting Washington, D.C., New York City and Philadelphia, doing everything from speaking to Congress to taking part in a multi-religious service at the 9/11 Memorial and Museum.

Bishop Anthony B. Taylor will be present for all six days the pope is in the United States, including the canonization of Blessed Junipero Serra Mass at the Basilica of the National Shrine of the Immaculate Conception in Washington, D.C., and during the papal Masses in Philadelphia. Bishop Taylor will also attend a meeting with the pope for bishops at St. Charles Borromeo Seminary Sept. 27 in Philadelphia.

“I think it’s really kind of a defining historical moment. I think people will look back at this pope and this time in the history of our Church.” Catherine Phillips, DRE at Our Lady of the Assumption Church in Booneville

In preparation for the trip, Bishop Taylor will bless the groups made up of teenagers, families, priests, sisters and seminarians at St. John Center in Little Rock Sept. 12.

“I hope we get to see (Pope Francis),” said Christie Powell, youth director at Immaculate Conception. “With two million people in the city we might see him on a Jumbotron a mile away … but I’m kind of hoping for a miracle.”

All groups will attend a prayer vigil on Friday night. On Saturday, the pope will speak in front of Independence Mall about religious freedom and immigration and at the Festival of Families.

“I am really thrilled,” said Father Wakube, pastor at Immaculate Conception in North Little Rock. “In a different country to be given a chance to concelebrate with the pope in full communion as a priest, I feel very, very happy.”

Father Wakube, who is from Uganda and belongs to the Apostles of Jesus Missionaries, said he’s excited for his parishioners to learn from this experience and evangelize.

“This is what we are preaching about,” he said. “To know we are one people, one faith, we have to work and believe together.”

“This is even more exciting because this pope is from the Americas, (he) comes from my country of birth, Argentina,” Father Quinteros said. “It has a lot of meaning to me. Pope Francis and I share a special love for Argentina and for its culture, but we were both called by God to serve the Church outside of our native land. It truly pleases me to be able to meet him here in the United States, the country I now call home.”

Powell, who organized the North Little Rock group, has been waiting and preparing for this moment before the pope was even elected in March 2013.

“When I was at Immaculate Heart of Mary (in Marche), we went to see Pope Benedict in (Washington) D.C. So I said whenever the pope comes back to America we’re going regardless of where it is,” she said.

Kristy Angyal and her two daughters, Mount St. Mary Academy students Emily, 14, and Aryan, 15, will be traveling with the North Little Rock group, as members of Immaculate Conception. For Kristy Angyal, she wants her daughters to experience that special feeling she got seeing Pope John Paul II twice while studying in Rome.

“I just happened to be there on two separate occasions in St. Peter Square and the pope came to the window. I thought, ‘Wow this is a big deal; that is the pope how cool is that,’” she said. “Once I married a Catholic and converted, then it really hit home.”

For this trip, Angyal said she hopes to be on “fire” with the faith.

“I’m hoping for my daughters to get caught up in the Catholic faith with thousands among thousands of other people,” Angyal said. “I want it to be engrained inside, keep the fire going.”

Madison Primm, 17, saw Pope Benedict XVI when she was in fourth grade.

For the Fort Smith and Springdale groups, the journey actually started at Our Lady of the Assumption Church in Booneville. Catherine Phillips, the parish’s director of religious education, heard a far-fetched idea from a parishioner who said, “‘Why don’t we go see the pope?’ I thought he was crazy,” Phillips laughed. However, after talking with Powell and as interest increased, the idea became a reality. Since Assumption is a small parish, Phillips partnered with Christ the King Church in Fort Smith. St. Raphael wanted to join as well, so two buses were reserved, making the group about 100 people. People from other parishes are also riding along, which include St. John Church in Russellville and Sacred Heart Church in Charleston.

Each person was charged $350 and fundraisers covered expenses for those who couldn’t afford it, Phillips said.

With seats still empty, invitations were extended to the 12 seminarians living at the House of Formation in Little Rock, along with Father Quinteros and vocations director Msgr. Scott Friend.

“The pope works for social justice but at the same time he doesn’t put aside the Church; he combines them,” said seminarian Emmanuel Torres. “I think I can learn a lot from him to combine social work and the priesthood. I’m open to what God is wanting me to learn.”

Phillips said their two buses have a unique “mission-style trip” planned. Instead of staying at hotels, they will be sleeping on the floor of The Old First Reformed United Church of Christ, less than a mile from Independence Mall where Pope Francis will be speaking. The 280-year-old church has six showers and floor space in the church, church hall and in the classrooms.

“I believe they will gain a lot for their personal growth and for their vocation,” Father Quinteros said of the seminarians. “It is a sacrifice to drive so many hours and sleep on the floor for a few days. So this is a real pilgrimage.”

For their stay, Phillips said they agreed to pay a small fee and run their Saturday and Sunday morning ministry of feeding the homeless men in the area.

“Because they’re shutting down the city, the church was nervous about canceling their ministry … we are able to be a blessing to them to staff this ministry,” Phillips said. “We feel really good in the spirit of Pope Francis to reach out to others in need.”

Aside from the buses, there are individual parishioners throughout the state making the trip, including Francis and Beverly Kane, parishioners at St. Joseph Church in Pine Bluff. The Kanes will be attending the canonization of Blessed Serra in Washington, D.C.

“We both wanted to see Pope Francis and we chose the canonization because of his work with the Native Americans,” Francis Kane, 69, said. Beverly, 82, is half Native American and said it will be special being there.

“I think there’s a definite blessing in just repeating the pope’s blessing that will be administered at Mass,” she said.

Loretta Purkey, secretary at St. Mary of the Mount Church in Horseshoe Bend, registered as a volunteer to help in special services during the papal Mass that Sunday in Philadelphia, she said.

“I just really wanted to be there, and I couldn’t think of anything better than to help disabled people,” Purkey said. “As far as I know I’ll be bringing the disabled people to where they should be for the Mass … I just consider it a great honor and privilege to be able to be there and do what I’ll be doing.”

While young and old will be making the trek to see Pope Francis, Phillips said it’s exhilarating to see so many people of faith coming together in celebration.

“I think it’s really kind of a defining historical moment. I think people will look back at this pope and this time in the history of our Church,” Phillips said. “It’s really, really exciting to me … So many Catholics from Arkansas are flocking to go see our vicar of Christ.”

Why I want to see Pope Francis

The 12 seminarians in the House of Formation in Little Rock were each asked to write a short essay on why they want to visit Pope Francis in September. Seminarians Isidro Negrete and Tito Zarate wrote the top essays as chosen by Diocesan Vocations Director Msgr. Scott Friend and Assistant Vocations Director Father Ruben Quinteros. Click here to read the essays.