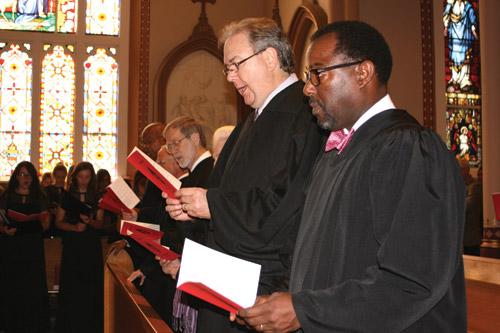 While law professors are accustomed to commanding a classroom of students and judges and lawyers oversee the courtroom, legal professionals came together Oct. 2 to relinquish their individual powers to honor God in his house.

More than 20 judges, lawyers and government officials celebrated the 21st annual Red Mass and luncheon at the Cathedral of St. Andrew in Little Rock. The event is sponsored by the Diocese of Little Rock and the St. Thomas More Society of Arkansas, an association formed in 1999 for political and legal professionals dedicated to St. Thomas More, the patron saint of lawyers, judges and government officials.

Bishop Anthony B. Taylor celebrated Mass with concelebrants including Father Gregory Luyet, chaplain of the St. Thomas More Society. Knights of Columbus members from Little Rock, North Little Rock and Jacksonville stood ready as the judges, clad in their black robes, processed into the Cathedral. Students from the William H. Bowen School of Law also attended the event.

In his homily, Bishop Taylor called attention to the fourth beatitude, “Blessed are they that hunger and thirst after justice: for they shall have their fill.”

“Your profession and Jesus’ call to holiness come together in this beatitude,” Bishop Taylor said. “Jesus is challenging his hearers and us to ask ourselves how much we really want to do that including the way you exercise the legal profession … That’s why I have to remind myself and you that the only one we really have to please is the Lord and sometimes this means embracing the cross, especially when what the Lord requires is unpopular or easily misconstrued.”

Bishop Taylor also told attendees they are at “the front lines” when it comes to protecting religious liberty and human life, dignity and rights.

Judge Eddie Walker Jr., president of the Arkansas Bar Association, served as the lector during the Mass and told Arkansas Catholic that even though he’s Methodist, Bishop Taylor’s words brought up important points for all professionals of faith.

“I think the concept of unity is very important,” Walker said, adding that if we forget the dignity of individuals, “we dismantle the value of the (legal) system.”

At the luncheon following Mass, keynote speaker Rep. French Hill spoke about the historical and moral importance of Pope Francis’ trip to the United States, particularly his comments to a joint session of Congress Sept. 24 and his encyclical on the environment, “Laudato Si’.”

“Of course, I love his message to the entire world’s people of compassion, collaboration and value of life in every stage of development,” Hill said. “I think he spoke to the hearts of both Americans and law-givers when he said ‘We have had enough,’ and he’s reflecting on the world generally … ‘we have had enough of immorality and mockery of ethics, goodness, faith and honesty.’”

Hill added the pope speaking of stewardship, in terms of a cleaner environment and civic organizations to help the least in society, and subsidiarity spoke to him as a congressman.

Also during the lunch the society recognized Phil Carroll, who worked at the Rose Law Firm in Little Rock, served as a special chief justice of the Arkansas Supreme Court in 1979 and was a member of Our Lady of the Holy Souls Church in Little Rock before his death on March 9, 2013. Caroll, who was also Rep. Hill’s godfather, was honored with the annual St. Thomas More Award for exemplifying the attributes of St. Thomas.

“The Catholic Church meant so much to Phil and he would be so proud of this award,” said his widow, Diane, who accepted the award along with their granddaughter Margaret Payne.

For both Catholic and non-Catholic leaders, the event is considered a spiritual renewal.

“My faith guides most of my life and my decision-making process,” said Sherwood District Judge Butch Hale, a Catholic who has attended all the Red Masses. “… Like the bishop said, we need the guidance of the Holy Spirit.”

Public Masses with restrictions may resume by May 17