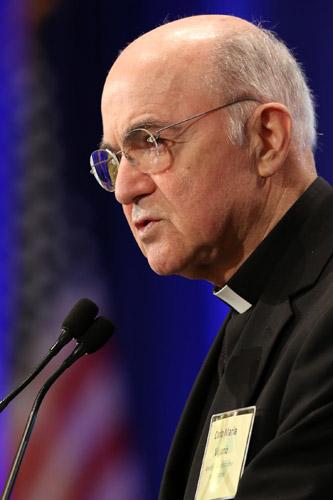 The pope’s personal representative in the United States has asked Gov. Asa Hutchinson to commute the death sentences of eight men scheduled for execution.

Archbishop Carlo Maria Vigano, apostolic nuncio to the United States, sent the letter dated Oct. 4 and released Oct. 7 in light of the execution dates set by the governor. Pope Francis and Bishop Anthony B. Taylor have recently spoken about the Church’s teaching against capital punishment. It has been nearly 10 years since Arkansas held an execution.

“As part of the Church’s ancient teaching on the dignity of the human person, the Holy Father has advocated for ‘the establishment of the universal moratorium on executions throughout the world, in order to abolish capital punishment' (Letter to the President of the International Commission Against the Death Penalty, 20 March 2015). While never wishing to minimize the pain suffered by victims and their families, His Holiness nonetheless, recognizes:

“‘Today capital punishment is unacceptable, however serious the condemned’s crimes may have been. It is an offense to the inviolability of life and to the dignity of the human person which contradicts God’s plan for man and for society and the merciful justice, and it fails to conform to any just purpose of punishment. It does not render justice to the victim, but rather foments revenge.’ (ibid)

“On behalf of the Holy Father, in solidarity with the bishops of the United States and in support of last month’s statement by the bishop of Little Rock, Most Rev. Anthony B. Taylor, I earnestly request that you commute the sentences of those men who have been scheduled to be executed in the State of Arkansas.”

Pope Francis told a joint meeting of Congress Sept. 24 that he backs the abolishment of the death penalty.

The archbishop appealed in the past two weeks in two other death penalty cases.

On Sept. 29, he unsuccessfully appealed on the pope's behalf to Georgia officials to commute the death sentence of Kelly Gissendaner, who was executed shortly after midnight the next day.

Within hours of receiving the letter on the pope's behalf, the Georgia State Board of Pardons and Paroles rejected Gissendaner's request for clemency and her execution proceeded.

Earlier, speaking for Pope Francis, the nuncio weighed in Sept. 19 on another highly publicized execution scheduled in Oklahoma for Sept. 30, that of Richard Glossip, whose challenge to the state's lethal injection protocol was rejected by the Supreme Court in June.

In the letter to Oklahoma Gov. Mary Fallin, Archbishop Vigano cited both Pope Francis and St. John Paul II as well as Oklahoma City Archbishop Paul S. Coakley. At mid-afternoon Sept. 30, Fallin issued a last-minute stay, prompted by confusion over Oklahoma's supply of lethal injection drugs. Her action was followed by a statement from the state's attorney general, E. Scott Pruitt, asking that three scheduled executions in the state be stayed indefinitely.