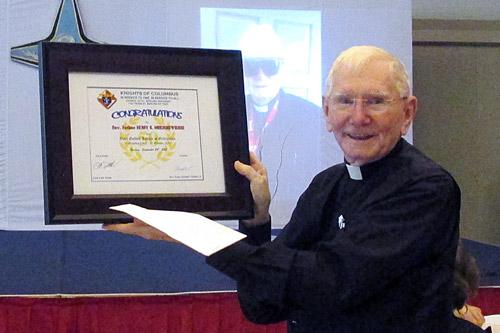 Maryanne Meyerriecks
Father Henry Mischkowiuski displays a congratulatory 50th jubilee plaque from the Holy Vietnamese Martyrs Council of the Knights of Columbus in Barling at his jubilee celebration at Sacred Heart of Mary Church Sept. 24.

Maryanne Meyerriecks
Father Henry Mischkowiuski displays a congratulatory 50th jubilee plaque from the Holy Vietnamese Martyrs Council of the Knights of Columbus in Barling at his jubilee celebration at Sacred Heart of Mary Church Sept. 24.

He had just finished high school and getting ready to attend college when he first met Blessed Teresa of Calcutta.

“Five of us — Theresa, Agnes, Frances Xavier, another young student and I — agreed to work with her when she was just starting,” he said. “It was quite an uplifting experience to do this charity work. Her love and compassion for others came from her deep faith and closeness to God.”

The joy and warmth with which Father Mischkowiuski greets everyone he meets by name had its roots in this early mission experience. After his ordination in 1965, he gave retreats and celebrated Mass for the Missionaries of Charity, often on special feasts like Easter at the Home for the Dying.

“Piety is an emotion, and devotion is love. Its essential elements are reverence, respect and courtesy. If you want to stay under God’s protection, you must practice devotion.” Father Henry Mischkowiuski

While attending engineering school in London, he delved into the works of two saints — Blessed Julian of Norwich and Venerable John Henry Cardinal Newman. Blessed Julian had a vision in which God showed her all he had created — the size of a hazelnut in his hand. She saw that all things have their beginnings in God’s love.

“God made me, God loves me, God keeps me,” Father Mischkowiuski said. “We can experience the genuineness of these truths by developing a strong faith and a heart that is steeped in gratitude. Devotion grounded in love has the essential elements of reverence, respect and courtesy.”

Father Mischkowiuski had a profound experience of God’s providence in his fifth year of engineering school.

“I received word that my parents had been killed in a plane crash in northeast India and my world fell apart,” he said. “And that night I went to the Catholic church and the only prayer I could think of was that of John Henry Newman: “Lead, kindly light, amid the encircling gloom, lead thou me on! The night is dark, and I am far from home — Lead thou me on!”

Two days later he learned that a business had agreed to pay his tuition and board until he graduated, and that he would have a job upon graduation.

Returning to India, Father Mischkowiuski worked six years supervising the building of roads and bridges throughout the country but continued to feel an attraction to serve God as a priest.

He attended an Indian seminary, and his first assignment was as principal of a Jesuit school whose priests had left the country.

“India has five or six political parties,” he said, “and in the area where I worked the Communist party was dominant.”

The school board members were Communists, and when he tried to reinstate the school constitution, he encountered strong opposition. He went to the government’s secretariat with the archbishop, but eventually had to go over the secretariat’s head to protect his school’s Catholic heritage.

He later became a pastor and principal in Calcutta, where he continued to be challenged by the Communists’ attempt to take over the local Catholic schools. When then-Pope John Paul II, a staunch opponent of Communism, visited India for the first time in 1986, Father Mischkowiuski toured the country with him.

“Some people told Pope John Paul not to come,” Father Mischkowiuski said. “He was met at the airport by large groups of people waving signs telling him to go home. He knelt down and kissed the ground and immediately the situation was defused.”

Feeling encouraged and affirmed to continue his struggle to preserve the Calcutta Catholic schools’ religious identity, Father Mischkowiuski nevertheless continued to encounter strong opposition from the Communist Party. By 1991 the authorities were trying to confiscate his passport, leading him to seek refuge in the United States. His warm welcome in Indiana was another sign of God’s providence.

He became a principal of a Catholic high school near Notre Dame University until 1993 when Bishop Andrew J. McDonald of the Diocese of Little Rock asked him to become the pastor of Our Lady of the Lake Church in Lake Village. In 2001, he was transferred to Sacred Heart of Mary in Barling and Sts. Sabina and Mary in Jenny Lind, and in 2014 he became senior priest at St. Mary Church in Mountain View.

At 82, Father Mischkowiuski still enjoys serving as a parish priest.

He is grateful for all the blessings he has received from his warm relationships with parishioners, past and present.

“In the West, many people have lost their devotion. Piety is an emotion, and devotion is love. Its essential elements are reverence, respect and courtesy. If you want to stay under God’s protection, you must practice devotion.”

He wore a handmade gold chasuble, a gift from the Vietnamese community, celebrated a jubilee Mass interspersed with moments of silent reverence. As is his custom, he chatted with each parishioner. The priest who learned from the mystics of the past and walked with the saints of this century continues to witness the path to sanctification.