At 79 years, ‘Doc’ Wilson is still fixture on the court 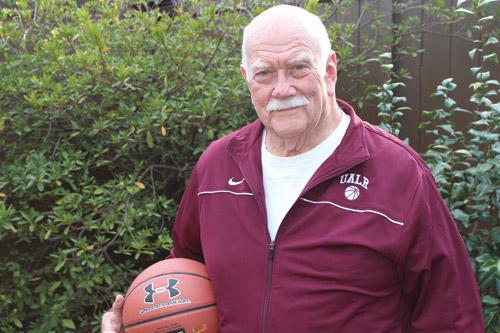 Dwain Hebda
Dr. John “Doc” Wilson, 79, a member of the Cathedral of St. Andrew in Little Rock, grew up playing basketball in Kentucky and still manages to play pickup games during the week.

Dwain Hebda
Dr. John “Doc” Wilson, 79, a member of the Cathedral of St. Andrew in Little Rock, grew up playing basketball in Kentucky and still manages to play pickup games during the week.

There’s nothing quite like the sound of a basketball hitting dead center, the white knotted twine of the net snapping just so. It’s a sound Dr. John Wilson, better known to his friends as “Doc,” has been chasing for most of his 79 years.

“I never saw a football game when I was growing up. I grew up in western Kentucky. We didn’t have football there, we had basketball year-round,” he said, his voice as deep and rich as the coal mines from which his forefathers drew their daily living. “My dad cut the bottom out of a five-gallon oil can and I tacked it up on the side of the barn. We used leather balls; couldn’t use rubber because of the war.”

Doc’s played basketball on dirt, wood and everything in between. He’s played outdoors at the farmstead, on the streets of Chicago and in the California sun. He’s played full-court, half-court, 2-on-2, 3-on-3, 5-on-5, make it-take it, around the world, more HORSE than Churchill Downs and even shot buckets for nothing more than that singular song of the net for his effort.

And he’s still going: A couple of mornings each week, he ambles into his longstanding 6 a.m. pickup game, the elder court statesman playing among contemporaries and guys young enough to be his grandsons alike.

“It’s probably genetic as much as anything else,” he said of his longevity. “I’m lucky; I’ve had ailments like everyone else, but I’ve had surgery for them and I’ve done well.

“I think it’s a wanting to get up and to be with the people that are out there. This is a social endeavor rather than a keeping-myself-in-shape endeavor. If I was going out and just shooting balls or something like that, I probably wouldn’t do it.”

Play a game or two with Doc and you catch on to a couple of things. First, egos get left at the door and there’s no crying; just check it and play ball.

Second, everyone who follows these rules is welcome, something he’s observed his entire life in the game even when social conventions would have him think otherwise.

“We moved into a town of 1,400 people and it was quite segregated in that area,” he said. “There’s a railroad track that ran past the barn where I had my basketball goal set up. The kids from the black community would walk to town, and I invited them over and they started playing. And I would play with them, which was very unusual back then.”

The high school team in Doc’s day took players as young as seventh grade, provided they had the requisite skills. One of his fondest memories in organized ball was as a middle schooler, he got into a high school game for three minutes against future NCAA and NBA champion Frank Ramsey.

“I think they beat us 90-something to 50-something and he had 50-odd points himself,” he said with a chuckle. “So he had more points than all of our team had. It was rather interesting.”

Not long thereafter, Wilson ran away from home to ease the financial burden on his folks. He found his way to Chicago where at 14 he worked in a machine shop and on the docks; a year later he landed in Los Angeles with a fake driver’s license for driving a cab by day and playing country western music by night.

“I came from a family of reasonable foundation and I knew right from wrong and I knew work ethic back then,” he said. “I did what I needed to do in order to survive: I worked and kept myself out of trouble. I avoided, the best I could, the predators and they were out there.”

Realizing early he didn’t want to punch a clock at the factory or garage door forever, he enlisted in the Air Force. By the time he was dispatched as one of the first 50 airmen at Little Rock Air Force Base, he’d already set his mind to a career in medicine. He got out in 1959 and returned to Arkansas to stay.

“I had gone in the military with an eighth-grade education and came out with 2½ years of college and I finished up my pre-med at Little Rock University (later UALR),” he said.

What followed was a distinguished career as an orthopedic surgeon, educator and an equally vocal proponent of tort reform in areas of malpractice lawsuits and of his beloved UALR Trojans. Last Easter, he entered the Church after years of attending Mass on the arm of his second wife, Joanne, a cradle Catholic and member of Cathedral of St. Andrew in Little Rock.

“I grew up in the Southern Baptist church and Catholicism was looked down on, as were blacks and Jews back then,” he said. “Once I started going to Mass with (Joanne), I couldn’t understand why Catholicism was so bad. It didn’t make sense. My wife never tried to get me to go to the Catholic Church to convert, even though she could not participate in the sacraments. And now she can.

“I’m convicted, if you will, that it’s best for husbands and wives to worship together. But I doubt very seriously that St. Peter is going to be concerned with exactly the flavor of a person’s church at the time it comes for him to make some sort of a decision.”

But if he is, you can bet Doc will gladly shoot free throws to settle things.