Exploring the Church, dating, sex and the single life 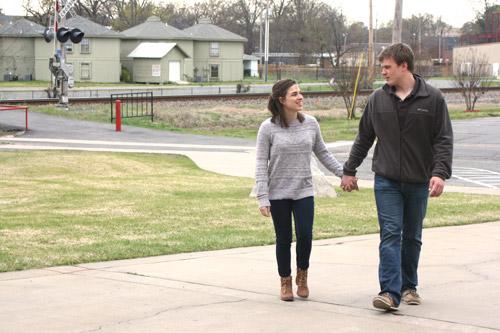 Aprille Hanson
St. Joseph parishioners Holly Hambuchen and Chance Keith, of Conway, have made prayer, going to adoration and leading college Bible studies a priority while dating for the past year and a half.

Aprille Hanson
St. Joseph parishioners Holly Hambuchen and Chance Keith, of Conway, have made prayer, going to adoration and leading college Bible studies a priority while dating for the past year and a half.

Source: National Survey of Family Growth by the Centers for Disease Control and Prevention statistics from 2011 to 2013

First in a two-part series on dating and Catholic singles

When young adults gather around to listen to their grandparents speak of their first date, it’s almost a novelty, a peek into a different world — grabbing a hot dog at the local stand, catching a drive-in movie, maybe a peck on the cheek and back by 9 p.m. sharp.

Since society has changed, couples from a bygone era that have similar stories far outweigh those of couples today.

Being Catholic calls young adults to rise to Christ’s standards when it comes to dating and while no one is perfect, it is the path to ultimately find God-centered love.

The National Bureau of Economic Research has said the decline in marriage can be attributed to several factors, including an increase in educational endeavors.

Tony Hoyt, 28, a member of Our Lady of the Holy Souls Church in Little Rock, explained he was “dating school.” As a first year medical student at the University of Arkansas for Medical Sciences with three more years to go, plus an additional four years of residency, finding time to date is tough.

According to Pew, a third of those between 26 and 33 have a four-year college degree, the highest in U.S. history.

“I still feel like a child at heart and I don’t realize I’m getting older. I have conflicted feelings about it,” Hoyt said. “I feel I am not rushed because of how much I have going in front of me,” Hoyt said. “But one day I might be 50 saying ‘Hey there’s no rush.’”

Chance Keith, 22, a member of St. Joseph Church in Conway who attends the University of Central Arkansas, said a lot of his friends have felt anxiety about not yet finding “the one God is calling them to.”

“I find a lot of peace through dating and through trusting God in this process,” Keith said. “I think that’s definitely in the Lord’s time.”

Save it for marriage

Alan Baltz, 24, a member of the Cathedral of St. Andrew in Little Rock, said Catholics need to look beyond the culture and what the Church teaches about sex outside of marriage.

“One of the key things about our current society it is a culture that’s highly driven by philosophy of relativism and instant gratification,” Baltz said. “The Church sets the ideal of God’s divine love.”

However, premarital sex has become commonplace in culture, with phrases like “Netflix and chill” (the millennial generation’s code for a hook-up) and popular websites where people can meet strangers to date or just for sex.

Baltz said because this attitude toward sex as separate from love is so accepted, many view Catholics as “sexually repressed; you’re brainwashed by archaic and obsolete teachings.”

Emily Rideout, 26, a member of St. Joseph Church in Conway and a student at UAMS, said, “I think you need to place boundaries from the get-go.”

“I definitely don’t like the whole hook-up culture. It puts both of the people in the relationship at a risk of being hurt and hurting other people,” she said.

Hoyt said it’s easy to fall into that mentality, “not from any straight-up mistakes I’ve made on my own,” but getting too close too fast can be dangerous to spirituality.

“It’s like burning leaves — hot and heavy and it’s gone.”

Last year, Seattle Seahawks quarterback Russell Wilson made headlines when he asked pop singer Ciara, “What would you do if we took all that extra stuff off the table and just did it Jesus’ way?” and abstain from premarital sex, according to latimes.com.

The couple is now engaged after Wilson proposed in March.

Ciara told People.com in February, “We get to have really healthy conversations and focus on each other as people.”

Keith and girlfriend Holly Hambuchen, 23, a member of St. Joseph Church in Conway and graduate of UCA, who have dated for about a year and a half, are on that same path.

“Just understanding it is a gift God has given us but not right now; I think that really helps us,” to not be distracted, Keith said.

“I feel loved by the fact he wants to wait as well and be respected. I think that helps us developing a good foundation for our relationship,” Hambuchen said.

Part of the decline in marriage and rise in premarital sex can be attributed to society accepting cohabitation, which the Church is against. The U.S. Conference of Catholic Bishops said cohabitation “means living together in a sexual relationship without marriage.”

Elizabeth Reha, director of the Family Life Office at the Diocese of Little Rock, said priests counsel couples who are living together before marriage to abstain from sex and not live together or at the very least, sleep in separate rooms. However, it has become the norm for couples preparing for marriage.

“I try to be very consistent with what the Church teaches. It is a temptation to have sex and to stay over,” Keith said. “A lot of what the world defines as love is emotionally based instead of really seeing what Christ is offering to it.”

With interfaith marriages on the rise in American culture, it’s understandable that many young adults date outside of their religion. Hoyt, a cradle Catholic, said faith “was always important to me” and still is.

Rideout said she hasn’t done much dating outside of the Catholic faith.

“They’re people I know in the Catholic Church and all the groups I’ve been a part of,” she said, adding that she and boyfriend of three months Alex Kordsmeier met at Catholic Campus Ministry at UCA six years ago. “I think it’d be hard (to date a non-Catholic). I don’t think another person would understand my priorities and what I’m looking for.”

Baltz, a second-year medical student at UAMS, said he has dated both Catholics and non-Catholics in the past, who know upfront his devotion to the faith.

“Most of my previous relationships have been with other practicing Catholics. I invite them to come to Mass with me and to pray and read the Scriptures,” Baltz said, quoting, “A couple that prays together stays together.” He and his friends have also gone on “adoration dates” with their significant other.

For Keith and Hambuchen, who each lead Bible studies at CCM, prayer is the center of their relationship.

“Praying together each day, going to adoration together, we tried to make that habitual from the very beginning,” and if they fail, Keith said, “We know we suffer.”

As in everything, Catholic young adults are encouraged to follow spiritual morals.

Source: National Survey of Family Growth by the Centers for Disease Control and Prevention statistics from 2011 to 2013

Your I.D. Episode 5: Marital Intimacy and the Mass

Marriage convalidation: A journey to mercy

Can I?: Answers to common marriage questions

Preparation must center on marriage and faith