Joseph Weishaar, 26, chosen out of hundreds of architects from around the world 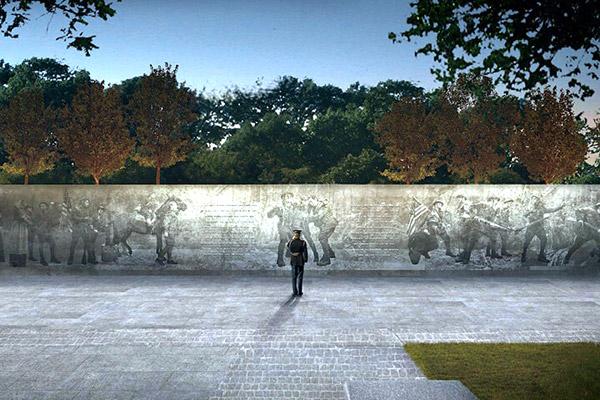 Artist’s rendering
The winning design for the first World War I memorial to be built in Washington, D.C., is called “The Weight of Sacrifice,” by architect Joseph Weishaar and sculptor Sabin Howard.

Artist’s rendering
The winning design for the first World War I memorial to be built in Washington, D.C., is called “The Weight of Sacrifice,” by architect Joseph Weishaar and sculptor Sabin Howard.

Joseph Weishaar had always envisioned himself designing residential homes for families. But never had he imagined that he would design a national monument to be admired and visited by people from every walk of life for generations.

In January, Weishaar was chosen from a pool of hundreds of architects around the globe to design the World War I national memorial to be erected in Washington, D.C., in 2018.

But for the past eight months, while his days were spent working, his nights were spent dreaming.

Designing and dreaming, of course, of a monument he hoped would reflect the struggles and aspirations of a nation and its people at a turning point in history.

“I would put in eight-to-nine-hour days in at the firm and then come back to my apartment in the evening and work for another three to four hours on my design,” the 26-year-old said.

In the end, that diligence paid off for Weishaar as his design was selected first from a group of 360 other applicants from the U.S. and countries as far away as France, England and Australia. After the first round, the field narrowed to only five submissions and in January, Weishaar’s design was awarded the honor of being the capital’s first national memorial commemorating the First World War.

“I can say that designing a national memorial wasn’t anywhere on my radar even nine months ago,” Weishaar admits. “In this profession we hope and pray for projects of prestige to come along sometime after we’re established. To get something like this at this point in my career boggles the mind.”

His winning bronze and granite design titled “The Weight of Sacrifice” will be in Pershing Park, a small park near the White House named after General John J. Pershing who led U.S. expeditionary forces in the war. A sculpture of Pershing, currently standing in the park, will be joined by a free standing sculpture and a bas relief sculpture to tell the story of all who contributed to the war. Maple trees, standing for every battle the U.S. fought in, will be planted around the perimeter of the park.

The Fayetteville native hopes to move to D.C. to oversee the construction of his team’s design once it begins.

Included on that team is 52-year-old Sabin Howard, an experienced classical sculptor from New York City, whose membership on the team was critical as the design became a finalist.

One might think becoming an architect was always the dream for one achieving such a goal.

“Up until my senior year of high school I wanted to be a mechanical engineer,” Weishaar said. But after taking an entry-level art class as an elective his senior year and discovering he had some natural talent the teacher pushed him to check out architecture as a way to balance out the engineering and the art sides of his brain.

His parents, Tom and Sandy Weishaar, longtime parishioners of St. Joseph Church in Fayetteville, have seen this side of him since he was a young boy.

“Even at 3 years old, Joe was always building and putting things together,” his father said. “He has always been very mechanical in knowing how things come together and come apart.”

Weishaar’s family, including his one sister Sandy, who lives in New Jersey, all attended the finalist’s presentations in Washington Jan. 6.

Tom said he knew after viewing the other presentations that his son’s design was different.

“Joe was the last of the five finalists to present,” said his father. “Afterwards, the commission came up and told us that the other finalists represented large firms and were accompanied by their lawyers. Joseph was the only individual finalist who had just brought his family.”

This quiet sense of being grounded and having an altruistic spirit has been a guiding principle throughout his life.

“I would say my faith has stayed very strong throughout my life,” Weishaar said. “The biggest thing that has changed is the prayers themselves over time. I find myself now more concerned with the lives of others, the lives of veterans, and when the memorial design gets tough there’s an occasional, ‘Oh God, why me?’ ”

Since January, Weishaar has done countless media interviews and been honored with an executive order by Gov. Asa Hutchison to establish a World War I Centennial Commemoration Committee to coordinate events honoring the war’s centennial in 2017 and 2018. He is also on tap to help promote the UA School of Architecture through a series of commercials.

“People ask me if I am proud,” Tom Weishaar said, “but I prefer the word inspired. He has never backed away from a challenge, and I feel just as inspired by him as I am proud.”