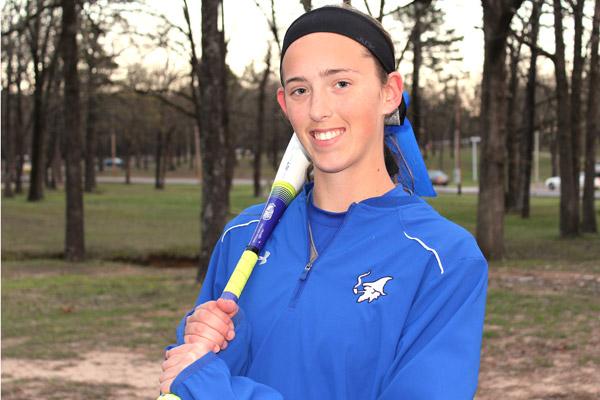 Dwain Hebda
Alex McManus warms up before pitching for the Rogers High School Mounties softball team. McManus, a freshman right-hander, is ranked one of the top 20 high school players in the nation.

Dwain Hebda
Alex McManus warms up before pitching for the Rogers High School Mounties softball team. McManus, a freshman right-hander, is ranked one of the top 20 high school players in the nation.

Alex McManus has a way with first impressions.

She played her first organized softball in grade school and after one year, high school coaches were telling her father to develop her pitching skills. As time wore on and the victories piled up, all-star coaches would take one look at the tall, powerful right-hander and pencil her into elite lineups all over the country.

She cast the same spell over college recruiters. Ranked 16th among recruits by online softball magazine Flosoftball, she committed to the University of Notre Dame in 2015 over scholarship offers from Arkansas, Oklahoma, Arizona State, Michigan and a handful of other Division I suitors late to the party.

Not bad for an eighth-grader.

“I was very lucky with the opportunities I was given at a young age,” the member of the Class of 2019 said. “You start small, but there are definitely places to start and then you have to be able to make the most of those opportunities.”

Today, at the ripe old age of 15, McManus’ schedule in the sport is as grueling as it is surreal. Suiting up for one’s high school is a dream for many athletes, but by the time McManus reported to Rogers High School last fall, a starting spot was all but a given. She’d already notched a national championship with an Arkansas squad and played on several other elite clubs from out of state shining on the pitcher’s mound and first base.

To give you an idea of how good the athletes are on these teams, when asked how often the far-flung teammates got together to practice, McManus shrugged, “We don’t, really.”

“We were expected to put in the work and come together as a team for tournaments,” she said. “We played all year long; summer ball, fall ball, it was constant.”

Shepherding her along, as he has her entire competitive life, is her father George McManus, an attorney. Even upon first meeting, the bond between them is palpable. Right before Alex took the field for a tournament championship game this spring, George tapped her on the helmet and said, “Dominate.” Alex’s eyes locked in at the sound of it.

“My dad’s a great coach, he does a really good job and I’m absolutely blessed to have him,” Alex said. “He’s there to push me; he’s played a very big role in my life. Just the fact that I have him to help me with practices, that’s awesome.”

“I first noticed she had a little something special when she was 9 years old,” George said. “At that time she just threw the ball really fast. It went everywhere, but it was fast. I knew as a coach that natural pitching velocity is a great asset.”

Neither McManus sugar-coats what it’s taken for Alex to get to this point. When she said she wanted to one day play in the Olympics, George was blunt about what it was going to take to get there.

“I told her she was going to have to work her butt off; when other kids take time off she would have to be at the field, but hard work is the only way to get there,” he said. “I put the responsibility on her to define her goals and tell me how hard she wants me to push her.

“Do we fight at times, oh yes, but our relationship is strong. Many people will tell you I push her too hard, but I don’t think so. I guess time will tell, but I will bet anyone that in 20 years I will continue to have a great relationship with my daughter.”

“I’ve had to miss out on a lot of stuff,” admits Alex, a 4.0 student. “I can’t go to other kids’ birthday parties, I can’t hang out with my friends as much. So far, as a freshman in high school I have yet to go to a single football game or a single basketball game, probably just by choice. I’m not comfortable enough. That’s just one of those things that I’ve never done and it’s new and it kind of freaks me out.”

One thing that she’s turned to time and again to sustain her through difficulties and help her keep perspective is her faith. The family attends St. Raphael Church in Springdale where McManus will be confirmed April 23. She chose St. Sebastian for her patron.

“He’s been really important in my life,” she said. “I have a medallion I wear all the time; my grandma gave it to me right before the recruiting process and she told me just to wear it and it will protect me and remind me of where I come from.

“Then, I went to all these different schools across the country and the one place I felt like I had a family where I belonged was Notre Dame. Whenever I’m there, I feel like I can also connect with my faith and I can continue my faith. It’s an amazing place and it was just really important to me to be able to have that.”