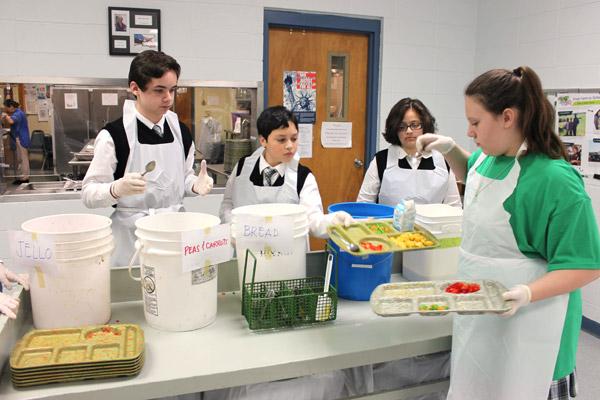 Pope Francis released his encyclical “Laudato Si’, on Care for Our Common Home” last year with a clear message:  God is calling the faithful to protect creation.

One way to do that is through recycling and Catholic schools throughout Arkansas are teaching students a variety of ways to mix faith and environmental awareness.

For years, St. Joseph Church and School in Fayetteville has taken steps to reduce its carbon footprint. In 2007, a cage for aluminum can recycling was built with grant funds from the Boston Mountain Solid Waste district for students, parishioners and nearby neighborhoods to bring drop off their cans. Lisa Tice, fifth- and sixth-grade religion and science teacher who wrote the grant, said a couple hundred cans are collected each year. In past years, the school has received prizes, including $1,000, for the school with the second most pounds of recyclables within a certain period of time from the nationwide Great American Can Roundup.

“We’re trying to teach the kids at a Catholic school to be good stewards of the earth,” Tice said. “We need to take care of this earth and recycling is one way we can do that and the money is secondary.”

In 2012, the school and church began recycling their paper and cardboard, saving the school $49 a month by reducing their trash pickups from three to two times a week. There are recycle bins in all classrooms and offices, which the sixth graders carry out once a week, Tice said.

“I don’t have to empty my regular trash cans as often, maybe twice a week,” Tice said.

It’s all part of mixing science and religion, which Tice said go “hand in hand.”

“We need to make use of the things God has given us,” she said. “Being wasteful of anything whether it’s time or materials is something God would not want us to do. By recycling, we’re trying to follow what he wants us to do.”

You are what you eat

While several Catholic schools throughout the state recycle in some way, St. John School in Hot Springs and St. Joseph School in Paris went beyond paper, plastic and water and straight to the uneaten food on their plates.  After fifth- and sixth-grade students at St. John learned about food waste, they started a STREAM project aimed at reducing the amount of food being thrown away at school.

“We broached the subject of hunger and poverty in our world. We bridged that topic from our own nutrition. God gave us the opportunity to live here, we didn’t pick to live in a first world country,” said principal Angela Isaacs. “We talked about how sad it is that there are still people in this world, countries in this world that can only live on a bowl of rice a day.”

Students weighed how much food was thrown out in the cafeteria in one day compared to how much was served.

From there, the students each researched various ways to reduce the waste. The second graders saved their milk cartons for recycling and a survey was created based off of the National School Lunch Program to find out which veggies students preferred least and most. The students were then able to learn about nutrition from the cafeteria staff.

“They made that real world connection of ‘Wow, we’re throwing out this food and maybe we’re not doing the right thing by doing this,’” Isaacs said.

St. Joseph School’s leftover food scraps have found the ultimate home — in the belly of hogs. For at least three years, the school gave lunchroom scraps to a local hog farmer. Now, they are sent to Richard Bauer, a grandparent of a student who owns a family-run hog farm. About two gallons of scraps are collected each day and are picked up by Bauer.

“They raise hogs for family, but sell off some of the hogs to pay for the feed,” said principal Julie Rochester. “When we donate our scraps, which we don’t have a lot, it helps with their costs.”

Last year the school also switched to a private cook, with the school board’s permission, to eliminate three times the food waste it had serving students through the National School Lunch Program.

“It was heartbreaking the first year I was here on the federal lunch program,” Rochester said of the food wasted. “It’s about sharing what we have and not wasting what we have.”

While recycling and reusing materials are an important lesson, applying it to community outreach and charity adds another religious layer to an already important cause.

For 20 years, Christ the King Church and School in Little Rock has been cultivating its mission in Honduras by building schools, clinics and evangelizing. At the end of each year, gently used school supplies like crayons, pencil bags and backpacks are sent to 12 of the Honduran schools for their students to use. The boxes that hold the school’s copy paper are shipped to Honduras with the school supplies. Jan Pipkin, physical education teacher and school team leader for the Honduras mission, said the school has been participating in this way for about 17 years. Supplies are also gathered at the beginning of the school year for parents taking advantage of school sales by buying extra items to donate.

“They get very excited about it,” Pipkin said of Christ the King students. “Our kids get a lot out of it because they have an age limit — they can’t go (to Honduras) until they’re 16,” explaining to the students “‘Our mission wouldn’t work if you didn’t give your pencils.’ They come to me and want to hand me their bag of school supplies they’ve got to give.”

For the Honduran children, “They feel like it’s Christmas time,” Pipkin said.

“I always have a big poster with pictures so the kids can see their school supplies in action,” she said.

Because the Hondurans do not have a lot, Pipkin said they often recycle.

“As we were teaching them, they were teaching us,” on how to reuse items, like how a plastic two-liter bottle can be used to irrigate a garden, Pipkin said.

St. Joseph School in Conway, which started donating school supplies last year to the CTK Honduras mission, has also been well known for its various recycling efforts on campus which started 17 years ago, thanks to history and psychology teacher Betsy Beacham. The school raises about $2,000 every year through recycling and often incorporates recyclables into class projects or lesson plans, Beacham said.

Spreading environmental awareness beyond campus, the Interact Club, sponsored by Rotary, has volunteered at Conway EcoFest since its inception seven years ago.  The club, which has 130 students from seventh to 12th grade, has managed a “Reduce, Reuse, Recycle” themed booth at the ecological festival in October where people can learn how to make and get a free rag doll made from old tablecloths, jeans, blouses and sheets that were donated but unable to be sold at the St. Joseph Flea Market. About 20 students volunteered at last year’s booth, with 200 pre-made dolls given away in addition to the 350 that were made that day.

“It shows the community what good kids I have here at St. Joseph. I have good, sweet, polite kids who work well with other people,” said Beacham, who is the Interact adviser.

“Whatever you save, you’re saving God’s earth,” Beacham said. “He gave you this earth so you need to not trash this earth.”