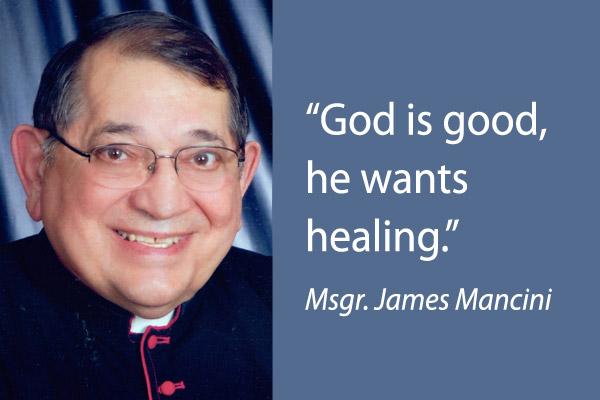 A young Jimmy Mancini played the part of a priest long before his ordination. With a dishcloth for a chasuble, a piece of bread sliced into a circle and his little sister altar serving for him, he held the host as high as he could for just a boy of about 11. He genuflected and enjoyed the “consecrated” homemade wine his mother let him drink.

“Of course Mama would have to let me have wine to practice Mass,” he laughed, remembering the mischief of his youth.

Msgr. Mancini, 75, celebrated his 50th jubilee of ordination May 28. He was ordained for the Diocese of Little Rock from St. John Home Mission Seminary in 1966.

Msgr. Mancini was born in North Little Rock, but his parents Giusto, who died when Mancini was just a child, and Annunziata “Lucy” Mancini kept the Italian heritage of their parents woven into the family’s everyday life, which included homemade ravioli for holiday meals. The second youngest child, little Jimmy enjoyed the simple joys in life — kick the can, walking to the drug store at the corner of 8th and Main Streets for ice cream on Sundays and playing hide-and-go-seek.

While attending elementary school at Our Lady of Good Counsel in Little Rock in the early 50s he took in the sights and spirit while visiting the seminary during “Seminary Days,” hearing God’s call in his life, he said. At just 13, he entered preparatory seminary, studying 12 more years until his ordination.

“I had a serious approach; I thought it was something very special,” he said of his vocation.

Throughout the years, Msgr. Mancini held several distinctions, including as one of the first diocesan liaisons to the Charismatic Renewal, appointed by Bishop Andrew J. McDonald and as chairman of the National Liaisons Committee from 1979-1981. It was during these out-of-town commitments he became known for his red socks.

“I was on a trip landing in New Orleans and the people didn’t know me. They wanted to know how they were going to identify me, so I started going in red socks. So that’s been carried on,” he said.

Some of his most profound work has been letting God work through him to defeat evil as an exorcist.

“They probably think an exorcist should look for demons to throw out. A lot of the exorcist work is tied up in the sacraments, particularly baptism,” he said, explaining how we’ve all been exorcised at our baptism from original sin. “It’s just the power of God that priests are allowed to exercise.”

The concept is less head-spinning, more freeing people through prayer and the Holy Spirit, he said. It often means freedom from a sinful activity.

“Once the demonic force is identified, I command them to depart in the name of God … usually you go by the activity to identify the demon or set of demons at work,” Msgr. Mancini said.

Though there are varying degrees of demonic possessions, Msgr. Mancini recalled one of the “rare” cases about 15 years ago where a young woman who suffered childhood trauma from ritualistic activities in an Arkansas cult, had several child and adult demonic personalities embodying her. Different from schizophrenia, Msgr. Mancini said initial prayers and follow-up sessions freed the woman from the possessions.

Like the early disciples of Jesus, Msgr. Mancini was not called to stay in one place, in one parish. Instead, he served in more than 20 parishes, missions, college campuses, prisons and hospitals throughout the state. He was pastor at Our Lady of Fatima Church in Benton for the longest stretch of nine years.
In 2002, Patricia Mansell met Msgr. Mancini when he became pastor at St. Joseph Church in Tontitown. She attended the Arkansas Charismatic Conference that year and when the pastor prayed over her, all the anger from the childhood sexual abuse she suffered melted away.

“That’s why Monsignor is my best friend, that God used him to help heal me,” she said. “He’s a fantastic priest and a fantastic person for all he could do for other people.”

Since that time, Mansell said God nudged her to be priest’s caregiver and the two enjoy each other’s company by playing cards or praying the rosary. Even while Msgr. Mancini was living with retired priests at St. John Manor in Little Rock, the two would play Yahtzee over the phone.

She now drives 20 minutes every day to visit him from about 10 a.m. to 6 p.m. at a nursing facility in Springdale. Since retirement in 2010, he has had four stents put in his heart, suffers from sleep apnea and diabetes.

But just like that 13-year-old boy of the past who first answered God’s call, Msgr. Mancini said he would never hesitate to take on more ministry work, despite his age and health.

Even today, he still ventures out sometimes to free individuals from demonic possessions, always easy to spot in his red socks.

A Catholic you want to know: Debbie Eckert