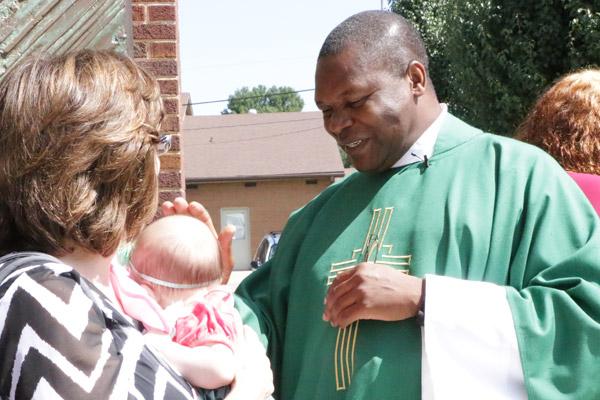 PARAGOULD — Amid the Second Sudanese Civil War, Father Stephen Mallanga, AJ, was sent to Sudan for one year to teach boys preparing for the priesthood.

“It was terrible,” Father Mallanga of Uganda said. “That was in 1986. … But I did not finish the full year in the Sudan. There was a lot of civil war going on. There was so many rebels fighting the government and our seminary was practically surrounded by rebels. The seminary was looted four times.

None of the boys was taken by the rebels. Father Mallanga said it took them a full week to drive to Uganda with a little water and snacks because the roads were dangerous and there was limited communication.

Still Father Mallanga, 54, said he has never regretted his work — there will be difficulties in life and in pastoral work, but he loves his vocation. His 25th anniversary as a priest was celebrated July 20.

“I’m very happy and, actually, I don’t believe it; that I’ve reached 25 years already. It has been a short time, but it was also a tough time, especially when I was in Africa in those countries where there was war between the government and rebels. It was not easy. Of course, I was a man of prayer. I trusted in God.”

Once he had to petition the government in Ethiopia in the 1990s for help after a girl in his parish was abducted. He said girls attended school until the ages of 12-15 and then they got married. Father Mallanga said he was able to convince some parents to leave their girls in school and found sponsors to cover the girls’ school fees.

“One of these girls was real clever. She was interested in school and she was doing very well,” he said. “The parents also wished her to study, but according to the culture, if the boy has loved the girl, he can take her at any time, even by force.”

A boy and his friends abducted this girl as she followed her mother home one night. Father Mallanga met with the parents and parish council and received permission to petition the government for help.

“They got her the following day,” he said smiling. “They arrested the boy and they brought the girl back. She was so strong.”

It was one of Father Mallanga’s proudest moments. He said she continued her studies and is now a nurse.

Father Mallanga said, as a young boy, his grandmother made sure she did not leave him behind when she went to church. He became an altar server and attended a Catholic boarding school about 60 miles from his home.

“One time … the (priest) announced in the church that the boys who would like to join the seminary should come after Mass to see him in the office,” Father Mallanga said. “So, I went. I just made the decision there when I heard Father announce it. My parents did not know what I was doing. I did it alone at school.”

Deciding he wanted to be a missionary priest, he spent two years at a novitiate before traveling to Nairobi, Kenya, to study three years of philosophy and four years of theology. It was between his studies in philosophy and theology that Father Mallanga was sent to Sudan for one year of pastoral experience.

Father Mallanga was ordained a priest July 20, 1991, as a member of the Apostles of Jesus religious order. His first assignment was in Ethiopia, where he remained for 17 years.

He left in January 2007 to serve as his order’s vicar general for six years at its headquarters in Nairobi. He then served one year at St. Jude Parish in Masindi, Uganda, in 2014 before moving to the Diocese of Little Rock.

He now serves at St. Mary Church in Paragould and Immaculate Heart of Mary Church in Walnut Ridge. He said the parishioners have been “good to me” — welcoming, friendly and eager to introduce him to their culture and people.

“Now, it is one year and five months since I came and I feel at home,” he added. “I am happy.”