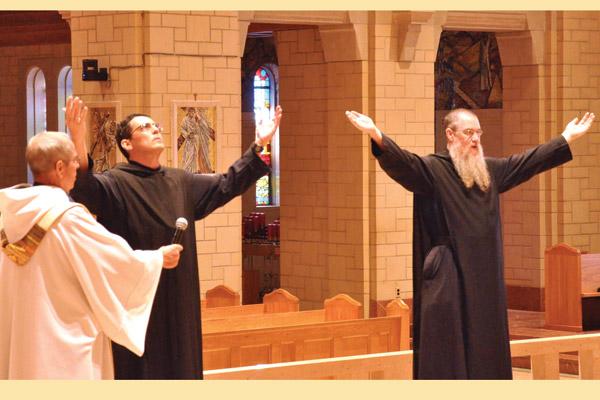 Society often measures success by wealth. So with jobs as lucrative as a ski instructor and a banker, giving it up to follow Christ might seem implausible. But on Aug. 20, it was exactly the path Brother Damien Cafaro, OSB, and Brother Roch McClellan, OSB, took by professing their solemn, lifelong vows at Subiaco Abbey.

They both found callings after a spiritual void.

When Brother Damien, then Christopher, was a child, he and his siblings had a devout Catholic upbringing, but it didn’t stick.

“I was going through the motions, going to church every Sunday, not exactly enjoying it,” Brother Damien, 50, said. “It was kind of like the Merle Haggard song ‘Mama Tried.’”

During college, he stopped going to Mass. He fell in love with the mountains in Colorado, working 20 years as a ski instructor at Copper Mountain and as a golf instructor during summers. While he loved his job, it was a “very godless” life.

After an accident caused him to be laid up for months, he was confronted by the Lord — either live in his love or without him. When he chose to defy God, his strength suddenly disappeared.

“It was the most crushing and devastating feeling I had ever had. I had never felt so weak, so alone and so scared. Hell is perpetual separation from God … This is like a little visit to hell.”

At that moment, he grabbed his rosary on the coffee table. Later, he said God revealed that one action was “the best moment of your life.”

“I quit smoking cigarettes, I was into drugs, quit that, into heavy drinking, quit that,” Brother Damien said.

He read about Subiaco, intrigued by the academy as he still felt called to work with children. Since entering Subiaco in 2012, he has had a variety of roles, including teaching religious studies at Subiaco Academy and as the prayer hotline coordinator.

And by letting go, he got the best of both worlds. During spring break this year, he took four academy students to Copper Mountain and taught them to ski.

Just like Brother Damien was sought out by God, Brother Roch’s journey to religious life has been a series of signs. Growing up outside of Kansas City, Mo., in Excelsior Springs, he was nondenominational, with a “vague, obscure belief in God.”

He worked for almost 20 years as a commercial bank analyst at UMB Bank in downtown Kansas City, but something was missing.

“I felt the pull towards God, but I didn’t know anything about religion. I went to any church you can think of — Presbyterian, Mormon, Buddhism,” Brother Roch, then Michael, said. “I finally got down on my knees and said, ‘OK God, I think the Catholic Church is the one for me, but I need a sign.’ That week I saw an ad for RCIA classes starting up at the local church there.”

The 51-year-old joined the Catholic Church in 2007 and worked as a volunteer at hospice, often sitting with terminally ill patients. He found Subiaco Abbey online and attended a retreat.

“I have to say as soon as I stepped on the grounds here I knew this is where I was supposed to be,” Brother Roch said.

After entering Subiaco Abbey in 2012, he learned to let go of his own desires, even when choosing his name as a brother.

“I always wanted to be Benedict … The summer before I took my simple profession I kept having these dreams with dogs from my childhood and a shadowy figure in the background,” which he believes was St. Roch, the patron saint of dogs who also ministered to the sick and dying, just as he had with hospice. “It was just another sign from God.”

For now, Brother Roch is preparing financial cost-revenue analysis reports for the abbey and academy, but said he hopes to one day help in spiritual direction.

“The question I get asked the most is don’t you hate giving up your freedom? You really don’t,” Brother Roch said. “You think you have freedom, but you’ve got your mortgage, car payments and family you’re responsible for; freedom is a relative thing. It depends what master you’re serving; I’m serving God.”

He had to deal with addiction before finding his vocation