A Catholic you want to know: Chase Hawkins 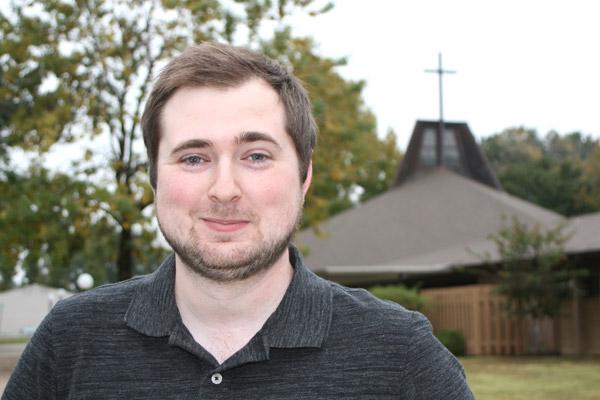 Why you want to know Chase Logan Hawkins: Chase Hawkins, a cradle Catholic, does not just say he’s pro-life — he takes action. Hawkins has gone with his family throughout the years to pray in front of the abortion clinic in Little Rock and corresponds with a death-row inmate. Along with his mother, he also teaches faith formation to 16 third-graders. Hawkins graduated from the University of Arkansas at Little Rock in 2012 with a degree in economics. He works as an internal auditor at Centennial Bank in Conway.

I think definitely a big part of that is the way that my mom and I teach third grade together here. It’s kind of interesting dealing with third graders because they kind of have a little bit of a foundation, but there is so much they don’t know. Some of the hot topics that adults would talk about, third graders are just completely oblivious to. So sometimes it’s kind of nice to avoid some of the politics that you can get into and just kind of focus on the core beliefs of the Church.

In what ways do you take action for pro-life causes?

I think a lot of people say they’re pro-life, but I think we lose sight of everything that means because there’s a strong difference between anti-abortion and pro-life. Every human person has God-given dignity, even people like on death row. And I think people think, ‘Oh how could you do that?’ Well, that’s not me saying anything you did was OK. But you know you have some sort of dignity and, yes, you should pay for what you’ve done, but I don’t think you have to be put to death for that. With abortion, life starts at conception. I believe that, that’s what the Church teaches and there’s dignity there.

You began corresponding with a death row inmate through Death Row Support Project more than a year ago — how has that impacted your faith?

When you think of death row you just think of all these horrible people who have done all these horrible things. But doing that (corresponding), you kind of get the more human side too. … If I can take this person who has been accused of something bad enough to be put on death row and kind of see the humanity in them and almost befriend them then I think that’s close to living out the mercy that Pope Francis has focused on recently. Because it’d be so easy to say, ‘Oh I go to church, I believe this, and then I just don’t have time for other horrible people in the world.’ I don’t think that’s what the Church is about — we try to bring everyone in and preach forgiveness and mercy.

Why is it important for you to stand up for the unborn?

If we don’t do it, who’s going to? … There’s a lot of emotion on both sides, but I think at the end of the day, it’s a human life and it deserves to be saved. That’s why I’m so glad we have things like St. Joseph’s Helpers because we can talk all day long about how wrong it is, but if we don’t provide an alternative to it, then are we really doing enough to A) help these mothers and B) stop abortion?

What are your hobbies?

I have a little Parson Russell terrier named Jack that I just got in May. He is a good dog, he’s a handful though, but I love him. He’s absolutely spoiled. He’s about two. … He loves to play and he has lots of toys and we love to go outside … He loves to just cuddle too. I have my side of the bed and he has his side of my bed with his own blanket.