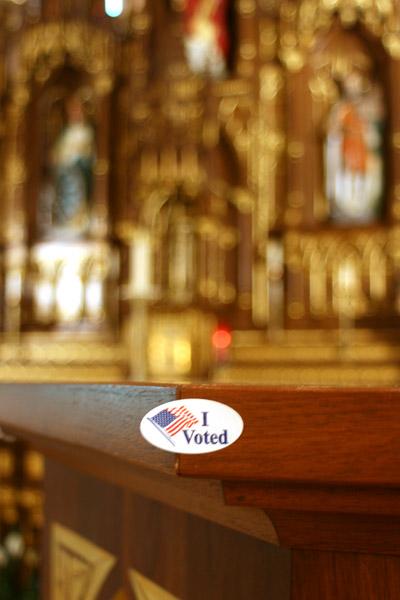 Aprille Hanson
St. Edward Church in Little Rock participated in the 2016 Little Rock Congregations Study Nov. 6. The University of Arkansas at Little Rock and the Clinton School of Public Service are studying whether people have better “political efficacy” if they attend a place of worship that is active in the community.

Aprille Hanson
St. Edward Church in Little Rock participated in the 2016 Little Rock Congregations Study Nov. 6. The University of Arkansas at Little Rock and the Clinton School of Public Service are studying whether people have better “political efficacy” if they attend a place of worship that is active in the community.

The saying goes that one should never talk about religion and politics in public, but that is exactly the topic of discussion and focus during a collaborative study by the University of Arkansas at Little Rock and the Clinton School of Public Service.

The 2016 Little Rock Congregations Study wants to find out if faith communities that are actively engaged in their community have better political efficacy and how that influenced the 2016 presidential election. The goal, according to Dr. Rebecca Glazier, UALR associate professor of political science, is to find out if community-involved churches and parishioners can “counter the feelings of disillusion people have with politics.”

This survey built off of a smaller 2012 study that focused more on whether or not clergy urging political involvement actually made the people more politically active. Glazier said 67 clergy were surveyed in 2012 and 84 this year.

“I think this kind of a study is really important because it puts into perspective the role of religious organizations as community organizations,” Bowman said. “ … I think that if we see a role back in this new administration of things that help the poor to be successful, whether it’s food or help for the homeless or other items like that, churches are going to fill that gap. Often where the government doesn’t fill a social a need, churches are the first line of defense.”

The surveys were anonymous and conducted on Sunday, Nov. 6. The two-page questionnaire asked participants questions regarding community engagement, religious beliefs, political interest and personal attributes. Questions ranged from ranked issues by order of importance, including race relations, health care, abortion and immigration to whether or not they heard their religious leader discuss topics that can be political during a worship service. Surveys were either filled out at Mass or are still being mailed in. As of Nov. 21, Glazier said they have received more than 1,000 completed surveys.

“I think that’s a big question we’re trying to answer,” Glazier said about how much a person’s faith influences their vote. “It depends on the individual person. Some said very strongly ‘I pray about all about these decisions’ … and some less so.”

Glazier said students attended St. Edward Church in Little Rock for their Sunday English and Hispanic Masses and another Catholic church, which chose to remain anonymous. Glazier said the team was “really happy” that St. Edward agreed to the survey because of the large population of both Spanish- and English-speaking Catholics. Of the 2,512 members, 1,601 are Hispanic.

For Susanna Creed, 27, a first-year student at the Clinton School of Public Service who led the survey at St. Edward, said as someone who is Jewish, it was interesting to go to the Masses.

“There were several people at St. Edward’s that asked, ‘Can I mail this in? I really want to take my time and think about my answers.’ I just thought that was really great to see that they were really invested and intentional about their involvement in this.”

Father Greg Luyet, pastor at St. Edward and judicial vicar at the Diocese of Little Rock, said he made it a point in his homilies to be specifically nonpartisan when discussing religious topics that can overlap into political ones.

“As Catholics we can’t separate our faith from our politics,” Father Luyet said. “We have to bring our faith into our voting and our choices and civic duty, but at the same time I think every Catholic has a responsibility to weigh the issues, consider the issues and vote his or her properly formed conscience.”

Part of the survey results will be revealed in March, with full results presented at a community presentation in April that will include some of the clergy who participated in the survey, Glazier said.

#13: 10 years after the murder of Patty Guardado