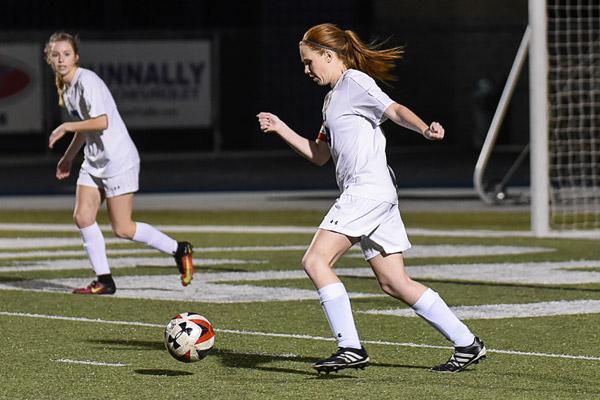 For Mary Treacy, it’s been the worst of times followed by the promise of the best of times.

The senior soccer captain and member of St. Vincent de Paul Church in Rogers suffered through a challenging season last year at Rogers High School, only to emerge this year with a new coach and new outlook on the sport.

“Last year wasn’t great; it was actually really rough,” she said. “We didn’t make it to state last year and honestly nobody really liked it last year. But, we have a new coach now, which has definitely been a transition, but for the better.”

Treacy, 17, said her Catholic faith helped bring her through difficult times both on and off the field, character that was honed during her time at St. Vincent de Paul School.

“I think that’s always appealed to me, being able to work with the other girls and to rely on my teammates to have my back.” Mary Treacy

“It definitely provided a great foundation as far as developing your character and your moral values,” she said. “I do think that’s something that can show up on the field as far as sportsmanship and teamwork. That’s definitely something that I try to exhibit every day.”

It’s not the first time soccer has provided a roller coaster ride during a career that dates back to primary school.

“Technically I played pre-K but back then, everyone had equal playing time and I hated it so I just sat on the field and cried the whole time,” she said. “Yeah, my mom tells me about it all the time. Sat there and cried, quit for a year and then when all my friends were playing I thought I’d try it again in first grade.”

Once she got back into the game, Treacy was a dynamo and showed enough grit and talent to make it onto traveling teams by the time she was a fourth-grader.

“That’s when it really became a big time commitment when we started playing with other girls who were really serious about it,” she said.

Treacy played basketball for St. Vincent de Paul while in middle school and ran cross country and track, although primarily to maintain conditioning for her team sports. By the time she was a freshman, she was good enough in both sports to make the Rogers High School teams, but it soon became clear where her heart was.

“I did travel soccer up until ninth grade and then in ninth grade, I was doing just school soccer and I was doing freshman basketball so I didn’t really have much time,” she said. “Sophomore year I did another year of club (soccer) because I stopped playing basketball. Since then I just focused on high school soccer. It is such a big time commitment and with my other activities it was just too much.”

On the field, Treacy settled into the role of defensive standout in the center back position, where she’s the team’s reigning defensive most valuable player. In addition to hard work at practice and in the weight room, she credits a penchant for mathematics for her ability to break down both film and live opponents.

“I definitely think that helps in games. I always think how can I cut off this angle or that angle,” she said. “My dad is always like ‘Yeah, your laziness is your best strength. You think of the best way to stop with the least amount of work.’”

Dad’s ribbing aside, there’s no hint of laziness in Treacy’s day. In addition to soccer, which eats up five days per week and is essentially a year-around activity, she plays flute at church and as part of the regional Ozark Philharmonic Youth Orchestra.

She’s also given back to her parochial school as a volunteer basketball coach, helping out with the seventh- and eighth-grade girls’ team. During the summer, she also coached a second-grade boys team at the local rec center.

To top it off, she founded a Model United Nations Club at her high school of which she is co-president and is president of the school’s Student Environmental Association.

For everything that tugs at this talented athlete’s time, including college recruiting visits (she plans to attend Notre Dame next year, which she committed to instead of Vanderbilt, Princeton and Texas Christian) Treacy retains the ability to stay focused on some key goals for her final high school season.

“A big thing with soccer is, it’s such a team sport and you have to work with all 10 other girls on the field,” she said. “You have your great players and people who really stand out and lead the team, but everybody out there is just as important. If one person’s not doing their job the whole thing can fall apart. I think that’s always appealed to me, being able to work with the other girls and to rely on my teammates to have my back.

“I would love it if we could win state. That would be ideal, but that’s a long road ahead,” she added. “I think, first step, we have to make it to state, have a solid conference record, hopefully get some good seeding. We just have to keep working.”