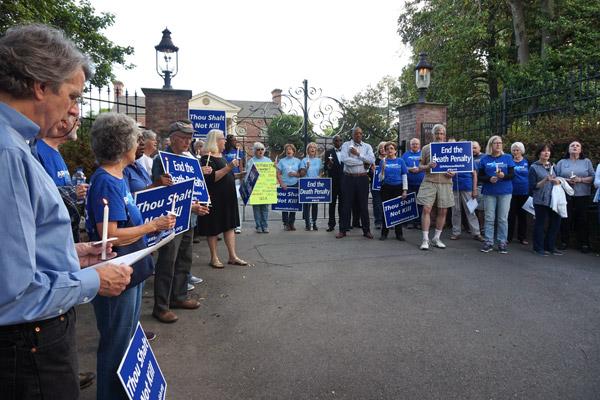 Aprille Hanson
Members of the Arkansas Coalition to Abolish the Death Penalty, Catholic peace group Pax Christi of Little Rock and other opponents of the death penalty sing and pray in front of the Governor’s Mansion April 24.

Aprille Hanson
Members of the Arkansas Coalition to Abolish the Death Penalty, Catholic peace group Pax Christi of Little Rock and other opponents of the death penalty sing and pray in front of the Governor’s Mansion April 24.

Lee was on death row for 24 years for the murder of Debra Reese. Jones was on death row since 1996 for the death of Mary Phillips and attempted murder of her daughter Lacey, and Williams was accused of murdering Stacy Errickson in 1994.

Both nights death penalty abolitionists gathered at the Governor’s Mansion in Little Rock for prayers, quiet reflection and songs.

“The real practitioners of the death penalty have always been the 10 southern states that practiced slavery, Arkansas among them.” Sister Helen Prejean, via Twitter April 21

Solomon Graves, spokesman for the Arkansas Department of Correction, said Lee received communion in the afternoon before he died instead of a last meal.

Difficulties obtaining drugs and court challenges caused the state to halt executions since 2005. After an Arkansas Supreme Court ruling cleared the way, Gov. Asa Hutchinson scheduled eight executions in 10 days, from April 17-27, before one of the drugs in the three-drug protocol would expire.

National and international attention descended on the state because of the number of executions scheduled in a short period. No state in modern times has tried to execute eight people in 10 days.

The world’s most well-known death penalty advocate turned her attention to Arkansas over the past three weeks to appeal to Hutchinson to grant clemency and commute their sentences to life in prison without parole.

Sister Helen Prejean, author of “Dead Man Walking” that inspired the movie by the same name, used her Facebook and Twitter accounts to rally her worldwide audience to call Hutchinson and Attorney General Leslie Rutledge.

One day after Lee’s execution, she tweeted, “The real practitioners of the death penalty have always been the 10 southern states that practiced slavery, Arkansas among them,” she tweeted the next day.

Texas is ranked first with 542 executions since 1976, according to the Death Penalty Information Center, followed by Oklahoma and Virginia. Nineteen states don’t have the death penalty.

After Jones and Williams were executed, she tweeted, “The fight to stop #ARexecutions and end the death penalty will continue tomorrow and every day thereafter until it is fully abolished.”

To Hutchinson, Sister Helen tweeted, “As a state official, you should not be involved in the killing of human beings. Be a statesman and a real moral leader.”

During a Facebook Live event with her followers April 19 she said, “The fact that they turned to medicinal means to try to kill people, to make it look like you’re not really killing people. We are in a mess over the drugs … The Supreme Court has been letting them experiment.”

“Governors are one of the few elected officials with the divine right of kings,” she said. “They have the power of life and death in their hands in their role as governor. If they don’t sign the warrant for that execution to go forward, it won’t go forward.”

On Easter, one day before the first scheduled execution, she wrote on Facebook, “The death penalty is antithetical to everything Jesus stood for and is a gross violation of the sanctity of life. Gov. Hutchinson, I urge you: Be blessed, be merciful and be truly pro-life during this Easter season. Stop your killing spree.”

Catherine Phillips, diocesan respect life director who attended the Good Friday rally at the Capitol and execution vigils, said, “I am deeply saddened by Gov. Hutchison’s and Attorney General Rutledge’s actions. They have divided our state by insisting that their actions are necessary for the sake of justice. However, the families who have lost loved ones will only find peace through faith and the promise of eternal life. We need to keep the families of all victims of violence in our prayers and help them to receive the support they need. Also, because we believe there is always the possibility of salvation even for people who have committed the most horrible crimes, we should pray for the repose the souls of the men that have been executed and hope that they died trusting in the love and mercy of God.

“As we move forward, we must continue to ask our governor, our judicial officials and all our elected representatives to do a much better job of working together to protect the lives and the dignity of all. It is time to abolish the death penalty. Scheduling eight executions in 10 days has been hard on the people of Arkansas. The killing needs to stop now, and Gov. Hutchinson can do this by using the legal authority of his office to commute the death sentences of those who are still scheduled to be executed to life in prison without parole.”

Of the eight scheduled, courts have issued stays in four of the executions. The final execution is set for April 27.

#13: 10 years after the murder of Patty Guardado