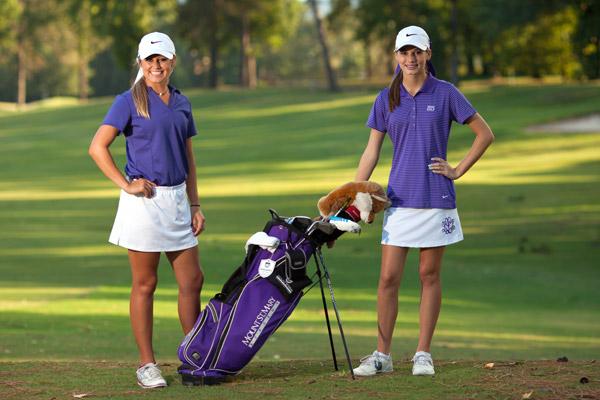 Four years ago, almost to the day, Mount St. Mary’s then-head golf coach Marilyn Lenggenhager sat in a small conference room talking up her sophomore star Taylor Loeb for the local press. After extolling the future state champion’s virtues at length, she paused and peered intently at the Arkansas Catholic reporter.

“And you know,” she said in a hushed, can-you-believe-it tone, “there’s another one.”

Fast forward to today, and that “other one,” 16-year-old Lauren Loeb, has ably stepped out of Taylor’s shadow and comfortably into her rather sizeable footprints. Lauren, a sophomore, came in sixth in the state last year, picking up All-Conference and All-State honors along the way and positioning herself as the leader of a young Belle squad.

“It’s very challenging and it’s such a fun sport to play,” Lauren said. “I like going on the course and playing with different people.”

Taylor was enjoying a successful freshman season of her own last year, as a scholarship golfer for the Division II Henderson State University Reddies. She earned seven top 25 finishes, fifth place in the conference and 43rd at the NCAA Super 3 Regionals. She was part of the first Reddies women’s squad ever to play in the NCAA National Championship and was named Great American Conference Freshman of the Year.

“It was a really good experience going to Nationals as a freshman,” said Taylor, 20. “I wish I’d played a little bit better, but that only made me play stronger this summer. I’m going to play a lot better this year knowing what to expect from Nationals now.”

Sister acts like the Loebs are rare, particularly so in golf, and the duo makes for an interesting study in contrasts. Taylor oozed intensity from an early age and you could often tell how well she was playing by her expression and body language. Lauren is equally competitive and prone to obsess over bad shots, but you’d never know by looking.

Those who have seen them both up close — like Lenggenhager, now the Mount’s athletic director — see similar markings of potential greatness.

“I saw them very young because I got to watch them play a lot in Arkansas Women’s Golf Association and Arkansas State Golf Association events,” Lenggenhager said. “Watching (Lauren) grow up and following Taylor, you could see she wanted to be like Taylor even though she’s her own person. She had great work ethics at such a young age and both of them just loved the sport and the competition.”

The Loeb sisters got a similar start in the sport. Taylor saw her dad Brian hitting balls in the backyard and wanted to give it a go at age 3, moving into tourney play by age 7. Lauren rode in the cart or on her mother Jennifer’s arm during many of those early outings and watching her big sister led her to pick up a club at age 4.

Both athletes advanced so quickly they were beating their dad — and pretty much all comers — well before they graduated Christ the King School in Little Rock. And both have enjoyed Brian’s tutelage throughout their careers, informally with Taylor and now formally with Lauren as golf coach for both the Mount and Catholic High squads.

“I always encourage both, and this is one thing I really strive for, to be very positive,” Brian said. “Try to just forget about the bad shots. They’re going to happen, they’re part of the game. It’s just how you recover from them.”

Both athletes love having Dad as coach; in fact, Taylor said one of the hardest things to adjust to in college was not having her family in the gallery at every tournament like during high school. On the other hand, their absence forced her to take ownership of her game, particularly the mental side.

As for their regard for each other, the Loeb sisters expressed nothing but respect, especially since Lauren has beaten her big sister more than once out on the links.

“I wish I had her short game; she can chip up anywhere and make the putt. Her chipping is insane,” Taylor said. “Every time we play together I think we make each other better. Even though she’s 16 and I’m 20 it’s still really good competition because we’re sisters and we just want to beat each other.”

“I always give her advice if she asks for it. Sometimes there’s a rivalry too, but that’s OK. She’s playing really well and her game is really strong and solid. I think she’s really similar to how I was.”

“My sister definitely influenced me to play,” Lauren said. “One morning she’s out hitting golf balls in the backyard and I was like ‘Hey, I want to try that’ and that did it. It’s just really fun.

“We’re both very competitive with each other, which is good. We’re both nice to each other and I’m really close to her. I love having an older sister to look up to.”