Catholic High juniors, senior dominate in tennis for third year in a row 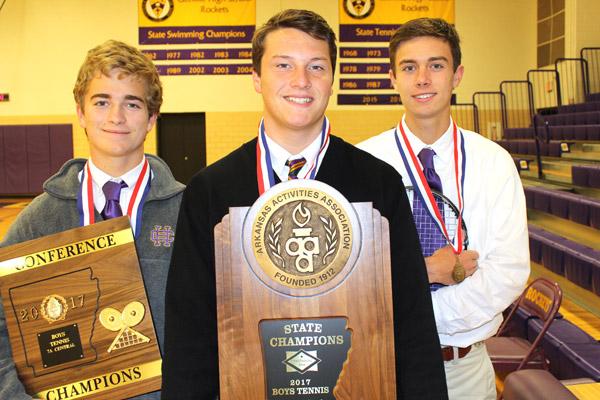 Stop me if you’ve heard this one: Catholic High is atop the high school tennis world.

The Rockets blazed their way to a third straight conference and state team titles this season, an accomplishment that saw one senior bow out in style and a doubles pair on the brink of perfection.

“This year, senior year, winning in the third set in the (state) finals, was just the best way to go out,” said Parker Stearns, who claimed his third consecutive singles title. “I had my friends storm the court, and we were all going crazy. It was just the way I wanted to go out.”

Stearns’ final campaign for the Rockets was memorable in a lot of ways. He was defeated only once, a loss he avenged a week later in the conference tourney, and demonstrated his mental toughness at state as one after the other of Arkansas’ prep elite took their best and last shots at dethroning him from atop the 7A singles heap.

“This year would have to be my hardest year,” he said. “Definitely.”

Few people can appreciate the pressure of winning at the highest level, let alone do it three times, but on a juggernaut team like the Rockets, Stearns has kindred spirits in juniors Henry Nolan and Steven Weeks. The doubles team has, amazingly, matched Stearns’ trajectory with three state titles of their own and understand well how to turn the bullseye on your back into motivation match after match.

“We do kind of like that,” Weeks said. “We like going out there and beating them and making their whole entire town kind of be quiet.”

“It gives me more of an edge, makes me want to prove something,” Nolan said. “This year has actually been the most competitive year, the hardest year.”

In fact, the year almost ended before it began for the unflappable Nolan, who underwent back surgery in February and didn’t touch a racket until summertime, then spent weeks of extra work to get back into peak form.

“It was frustrating; it took longer than I thought it would,” he said. “I’d say, a month and a half I started feeling a lot more comfortable on the court.”

“All through the regular season, we would go and play a doubles match every Monday and Thursday night against our two coaches,” Weeks said. “All those matches really helped.”

At state last month, Stearns enjoyed a first-round bye, dominated Andrew Mason of Little Rock Central in the quarters and dispatched Ethan Edelman of Fort Smith Southside in straight sets in the semi-finals. His finals opponent was Jake Sweeney of Fayetteville.

“The first set I played a pretty good game to win it and then the second set he just completely changed his game, which I was not ready for,” Stearns said. “I started changing it up, which probably wasn’t smart on my part, and he won the second set fairly easily.”

Stearns gritted his way to 5-4 in the third set before falling behind 30-love, when two quick points tied the game. As a rattled Sweeney mis-hit match point, it brought fans streaming from the bleachers and Stearns his storybook ending.

Nolan and Weeks cruised through their first two matches at state, reaching the finals against their teammates Jackson Davis and Harrison Cook, the second time in as many years they faced fellow Rockets for the title. With the team title locked up, all that remained was extending the championship streak, even if it came at the expense of their classmates.

“It’s a lot easier to play because you know the kids really well. There’s not as much tension, you can just have a lot of fun with it,” Nolan said.

There was little run in losing the first set, however, or falling behind in the second, 3 games to 1. “I was pretty disappointed. I thought we were going to lose,” Weeks said. Just in time, the champions started clicking and, winning the second set 7-5, poured it on in the third, winning 6-1. The medals were barely around their necks before chatter started about next year.

“Winning senior year is probably one of the most important things to us,” Nolan said. “I think we can, obviously, but it’s not going to be easy.”

“This season kind of gave us a sense of reality, that we really could win four in a row,” Weeks said. “After this one, we only have one more year. We really think we can do it.”