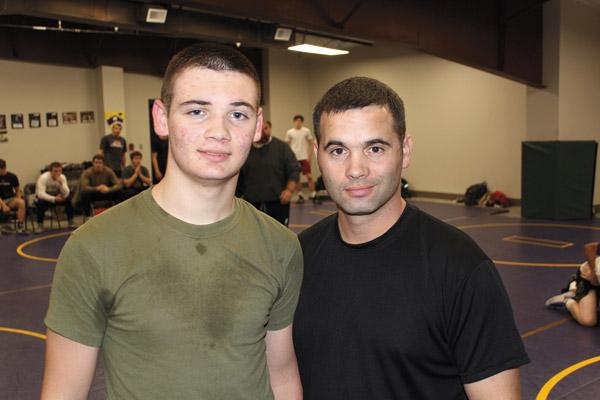 Dwain Hebda
Marcus Crawford (left) and his dad and coach Matthew Crawford, take a break from wrestling practice. Marcus is the third generation in his family to wrestle competitively.

Dwain Hebda
Marcus Crawford (left) and his dad and coach Matthew Crawford, take a break from wrestling practice. Marcus is the third generation in his family to wrestle competitively.

The Catholic High wrestling team’s practice space is lined with thick mats and grappling athletes. Along one wall, backpacks lie slipshod on the floor under the portraits of past champions that peer down, gauging the new season’s crop. The air is heavy and rank compared to the late November breeze outside.

Along the back wall, assistant coach Matthew Crawford guides two wrestlers through their opening drills. This is Crawford’s third tour helping out hall of fame head coach Paul Mammarelli, but this year holds a certain urgency for him, even this early into the season.

The reason why is a lanky junior, olive green T-shirt already soaked with exertion: Marcus Crawford, Matthew’s son and the third generation of the family to wrestle. Of the many cruel truths athletes learn in high school, the sharpest of them all is you get four years, win, lose or draw. Marcus’ run is half over.

“It’s given us something to connect with, because unfortunately I’ve been gone a lot throughout his life,” Matthew said. “(Wrestling) is something we can connect on. It’s kind of cool.”

Marcus was two weeks old when his father shipped off to the U.S. Air Force. A former high school wrestling hotshot in Kansas City, Mo., Matthew has spent the past 16 years in the service, serving various deployments including Korea where he was sent during Marcus’ freshman year and his first year to wrestle. Last year, Matthew was stateside, but Marcus broke his leg in a January practice, ending his sophomore campaign early.

This year can make up for all of that.

“For a third-year wrestler, he’s coming into his own,” Matthew said. “For me, my third year I was in the sixth grade, so it’s a lot harder for him. He’s progressing like he should, and he’s picking up some things quicker than I expected.”

Despite his late start and the bad luck of last season, Marcus also speaks about the new campaign in a cool, confident tone. Currently at 160 pounds, he hopes to compete at 145 or 152 as he chases his dream of a state medal, something his father and grandfather never achieved.

“(Wrestling) is a great stress reliever,” Marcus said. “I find it fun and I’m naturally good at it.”

The Crawfords, members of St. Patrick Church in North Little Rock, couldn’t be more different as athletes go. At 36, Matthew is a tightly wound spring in a 5’5” frame, rapid of speech and movement. Marcus is angular and long, measuring nearly 6 feet tall with a speech pattern far more measured than his dad’s.

“It’s pretty helpful to have him as a coach; it provides a lot of one-on-one time,” Marcus said. “He’s honest with me; I know he won’t lie to me.”

The rest of the family is rounded out with mom Amanda, who is the moderator of the Diocesan Tribunal, and two younger sons, ages 3 and 4.

The father and son’s obvious differences have forced Matthew to refine his wrestling knowledge into a coaching style that’s more nuanced than mere do-as-I-did.

“It’s like my dad taught me — we all have our own style,” he said. “I show (Marcus) some things, but I can’t make him wrestle the way I do. It’s not going to work for him.”

In many ways, Marcus embodies the 2017 Rockets — young, inexperienced and largely unknown commodities. He’s got a lot to learn but he’s coming along quickly, bolstered by a high work ethic and a bottomless love for the sport. Having his dad along for the ride is icing on the cake.

“I’ve always wanted to wrestle,” he said. “It’s kind of a family tradition, I guess you could say.”