Bishop will not attend March for Life in Little Rock 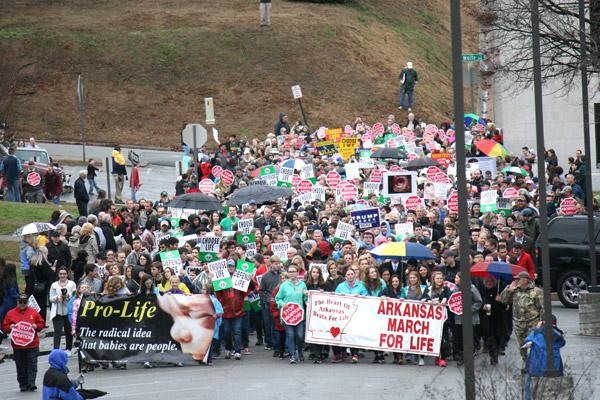 Malea Hargett
March for Life participants gather at the beginning of the march route behind the State Capitol in Little Rock Jan. 22, 2017. Bishop Anthony B. Taylor led the opening prayer.

Malea Hargett
March for Life participants gather at the beginning of the march route behind the State Capitol in Little Rock Jan. 22, 2017. Bishop Anthony B. Taylor led the opening prayer.

Bishop Anthony B. Taylor announced Jan. 17 that he has decided to not participate in Little Rock’s March for Life in protest to keynote speaker Attorney General Leslie Rutledge’s stance in support of the death penalty.

In a letter to the “people of the Diocese of Little Rock,” he encouraged Catholics to join him at one of two Masses for Life he is celebrating Sunday, Jan. 21 at the Cathedral of St. Andrew to mark the 45th anniversary of the Roe vs. Wade Supreme Court decision.

The March for Life was established 40 years ago with the support of the late Bishop Andrew J. McDonald and bishops have always participated in the march and led the prayers, but the march is organized by Arkansas Right to Life.

The march is always scheduled at 2 p.m. in downtown Little Rock following the Mass for Life at noon. In addition to the march, a program or rally is held on the capitol steps. A similar march, organized by the Northwest Arkansas Catholic Respect Life Council, will be held in Fayetteville on the same day.

“This is to remind you of the two Masses for Life to be offered at the Cathedral of St. Andrew this Sunday, Jan. 21 as we pray for an end to abortion on this 45th anniversary of the Roe v. Wade decision that legalized abortion on demand in this country. The Mass for youth is at 10 a.m. and the Mass for the general public is at 12:05 p.m. Also there will be a prayer vigil with Adoration of the Blessed Sacrament from 6:30 p.m. Saturday evening until 7 a.m. Sunday, also at the Cathedral and I encourage you to participate in that as well.

“This is also to advise you that I will not be participating in the March and Rally for Life as in previous years. The reason is that Arkansas Right to Life has chosen as the keynote speaker for the rally a person who has good anti-abortion credentials but otherwise is decidedly not an appropriate pro-life speaker, namely Attorney General Leslie Rutledge, who this last year worked tirelessly to secure the execution of four criminals who posed no further threat to society. You will recall that the Diocese of Little Rock was very vocal in appealing for clemency for these four men, but we were opposed at every turn by Attorney General Rutledge. For this reason, I asked Arkansas Right to Life to choose a more appropriate keynote speaker, indicating that I could not participate in what was supposed to be a pro-life event otherwise. But Arkansas Right to Life has refused to do so. You are certainly still free to participate, but this is the reason we are not promoting the Rally for Life at the State Capitol this year. I imagine that many of you may choose to go ahead and participate in the march but then skip the rally.

“As you know, the Church teaches a consistent ethic of life in which human life and human dignity must be protected from the first moment of conception to natural death and every stage in between. This means, among other things, that all lives have inherent God-given dignity. Even people who have been sentenced to death possess this dignity, which is why capital punishment must be abolished.

“I would also like to encourage you to participate in the Nine Days for Life Campaign of the USCCB Committee on Pro-Life Activities from Jan 18-26. Note that day 8 calls for an end to the use of the death penalty in our country. More information can be found here.

“Thank you for your understanding and I will look forward to seeing as many of you as possible at the Cathedral this Sunday as we pray for an end to abortion in this country and that all human life may be protected from the first moment of conception to natural death.”