Conway Catholic serves her team as well as students at UCA, Hendrix College 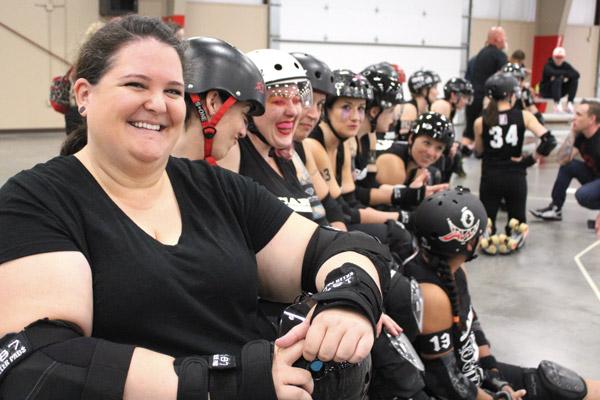 Dwain Hebda
Kasey Miller, aka KC/DC, gears up with her teammates on the Rock Town Roller Derby club. Miller, a member of St. Joseph Church in Conway, is a Catholic campus minister when she’s not skating.

Dwain Hebda
Kasey Miller, aka KC/DC, gears up with her teammates on the Rock Town Roller Derby club. Miller, a member of St. Joseph Church in Conway, is a Catholic campus minister when she’s not skating.

St. Francis of Assisi is credited with the familiar directive, “Preach the Gospel at all times. When necessary, use words.”

It’s unlikely that St. Francis meant to use hip checks and elbow pads, but then he didn’t say not to, either. And thus, these have become the tools of Catholic campus minister Kasey Miller’s trade as KC/DC, a member of the Rock Town Roller Derby club.

“A lot of things I’ve learned in derby have helped me empower and encourage my students and vice versa,” she said. “It helps me be more fully myself.”

Miller, a Catholic convert and member of St. Joseph Church in Conway, grew up in an evangelical household. She began exploring Catholicism while attending Virginia Commonwealth University where she originally had designs on becoming an oral surgeon.

“A lot of things I’ve learned in derby have helped me empower and encourage my students and vice versa.” Kasey Miller

What began as debating religion in a theology class changed the course of her life.

“I was skipping classes to do ministry work; I was taking calls from fellow students who were going through things. It became very obvious God had something planned for me,” she said. “My teachers and mentors said you have to examine your life. Where are you being pulled versus where are you making yourself go?”

“I really needed a community and something to challenge me because going to the gym was not happening,” she said. “Working with college students is awesome and keeps you young, but they’re college students. I was looking for something with people my own age.”

Acting on a suggestion from her sister, Miller checked out a practice of the Little Rock roller derby club and has never looked back.

“I asked them where they were practicing and I showed up and fell in love with it instantly,” she said. “Everyone is very supportive of each other and that really exceeded my expectations. I thought it would be a team and great, we’d have a couple socials and that would be it. But it’s very much a family.”

Miller wasn’t entirely unprepared for the sport — she was a competitive figure skater growing up and had played various sports through high school. But that was a long time ago and roller derby proved to be a learning process.

“Eight wheels are very different than (an ice skate) blade with edges,” she said. “Being able to skate and keep my balance was very much going back on a bicycle, but (technique) is very different. Figure skating is very up and kind of ballet-like. Roller derby is very down, football positions. Being able to do that on skates is challenging.”

After nearly dying out in the 1970s and 1980s, roller derby has had a wholesale renaissance over the past decade or so. Most leagues have eliminated the cartoonish violence or overt sexiness of the past in an attempt to showcase skaters’ considerable athletic skills. In fact, Rock Town skaters have to demonstrate a level of proficiency before they are allowed to perform certain contact drills or compete.

Miller finds the process of honing her physical skills a metaphor to her teammates’ spiritual development in that everyone falls sooner or later. More than once, she’s lent her ministerial skills to help them back up.

“The club is an awesome teaching moment for me because of the diversity,” she said. “I meet people who’d never cross a threshold of a campus ministry or a church in their life. I get to hang out with them multiple times a week and I field a lot of questions about the Catholic Church.”

“More than that, I get support and love and encouragement from them and give that to them in return. It’s an amazing example of how the Church is supposed to be in the world.”

Documentary about Arkansas priest to premiere May 24