No ‘I’ in team: Mount seniors’ bond endures adversity 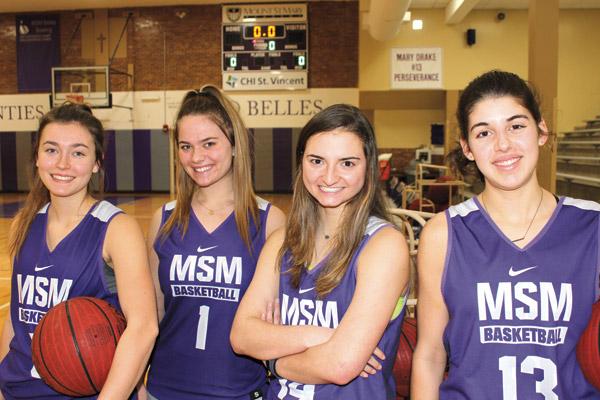 Dwain Hebda
Seniors Sarah Sagar (left), Abby Bingenheimer, Payton Grice and Anne Moellers huddle before practice. The foursome, who all came up through the parochial league, are the bedrock of this year’s Mount St. Mary’s varsity squad.

Dwain Hebda
Seniors Sarah Sagar (left), Abby Bingenheimer, Payton Grice and Anne Moellers huddle before practice. The foursome, who all came up through the parochial league, are the bedrock of this year’s Mount St. Mary’s varsity squad.

It was summer before freshman year and, with the exception of Bingenheimer and Sagar who grew up in Immaculate Heart of Mary Church in North Little Rock (Marche), none of them wanted anything to do with the other.

It’s amazing what off-season workouts can accomplish. Run enough lines, lift enough weights, withstand enough of Coach Lauren Ramsey’s blistering sermons and it changes you. And in the case of this foursome, that bond has been unshakable.

“I feel like there’s girls on this team that would be my bridesmaids at my wedding, honestly,” said Bingenheimer. “It’s crazy how you can make lifelong friendships especially since, if we didn’t play basketball together, we would not have been friends. I’m being serious. We did not get along but spending that much time together made us closer.”

“It’s because of the team. I love everybody on the team. It sounds cheesy, but I honestly wouldn’t play if I didn’t have every single one of my team-mates.” Anne Moellers

Today, the four homegrown seniors are years wiser both in basketball and in the sometimes-harsh life lessons that come with growing up. They know each other inside and out, have a million stories on the court and off and even when wins were hard to come by, the foursome grew tighter.

Last year the Belles coalesced to bring the Mount back to the state tourney for the first time in a decade, giving the team a ready goal for the 2017-2018 campaign. The four seniors would be pivotal to that effort and, reinforced by talented underclassmen, entered the year with high hopes.

The basketball fates had other ideas.

Just a few games into the season, Bingenheimer’s left knee caved for the second time in as many years. She knew the moment she hit the floor her career was over. Sagar, her running mate since third grade, knew it too.

“Junior year when she got hurt, it was a bunch of emotions because it was our first year not playing together and it was tough not having her there. (But) we had senior year to look forward to,” Sagar said. “It was like, we know you’re going to be back and we’ll have one more year to play together. Then we played about five games and when she fell, I just lost it.”

The other three dug in to pick up the slack — Grice with her silky-smooth jumper, Sagar with her floor-general leadership and Moellers with her boundless intensity — but it’s a steep hill to climb in the state’s elite competitive division. Still they keep working and still, the bond of teammates endures.

“My whole life I’ve always had a passion for basketball,” said Moellers, a product of Christ the King Church in Little Rock. “My mom’s always like, ‘Anne, why do you stick with it?’ because it’s a very strenuous program. It’s because of the team. I love everybody on the team. It sounds cheesy, but I honestly wouldn’t play if I didn’t have every single one of my teammates.”

The seniors do more than just dote on each other; they’ve evolved into surrogate coaches for the next wave of Belles to come.

“You have to encourage them, for sure,” said Grice, a member of Our Lady of the Holy Souls Church in Little Rock. “When you’re a sophomore, it’s really hard because you’re not getting to play as much. Even if you are coming in playing varsity games, it’s really nerve-wracking because of all these older girls. You have to tell them, don’t worry about missing that or don’t be nervous, you’re doing fine.”

Earlier this month, Bingenheimer underwent knee surgery to again repair her ACL and remove her shredded meniscus. It hurts to be around the program, but not nearly as much as abandoning her squad. So she still attends practice, giving pointers, trash-talking them into running harder and when Coach Ramsey’s trademark bark has just that much more bite, she translates the message. It’s what teammates do.

“I’ve always called basketball my boyfriend, because it’s where I spent all my time, it’s all I did. And then it just gets taken away,” Bingenheimer said, characteristically blunt. “And then I’m like well, at least I have my girls.”