More than 500 attend annual March for Life in Fayetteville 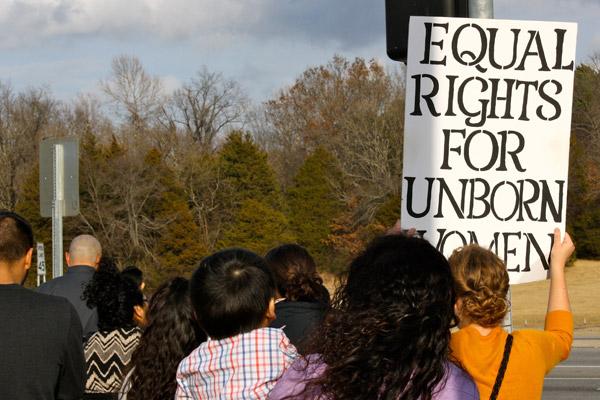 Alesia Schaefer
A marcher holds a sign during the March for Life in Fayetteville Jan. 21. The march from St. Joseph Church to the Planned Parenthood clinic was established in 2016 by the Northwest Arkansas Catholic Respect Life Council.

Alesia Schaefer
A marcher holds a sign during the March for Life in Fayetteville Jan. 21. The march from St. Joseph Church to the Planned Parenthood clinic was established in 2016 by the Northwest Arkansas Catholic Respect Life Council.

FAYETTEVILLE — The annual three-mile March for Life in Fayetteville saw a significant increase in participants Jan. 21.

Last year, during the second annual event, about 300 people participated.

People came from different denominations and cities to make the 2.9-mile walk to an area in front of the Planned Parenthood clinic. A short program was held in front of the clinic.

“Since 1973, over 220,000 unborn children have been killed just in the state of Arkansas,” she said. “That is about 3,000 abortions a year performed at the three clinics that remain open in the state.”

Little Rock has the only remaining surgical abortion center, but chemical abortions take place at Planned Parenthood clinics in Little Rock and Fayetteville.

While Pursell was encouraged by the turnout, she also emphasized the need for constant prayer and vigilance.

“If only 10 percent of those numbers would come out and regularly pray, this is what is really needed,” she said.

Pursell encouraged people to visit onehourwithme.com and sign up for one hour a month in front of the Fayetteville clinic. The website has more information about the Respect Life Council and how to support its efforts.

“This is really not a political issue; this is about our faith and the killing of innocents,” Pursell added.