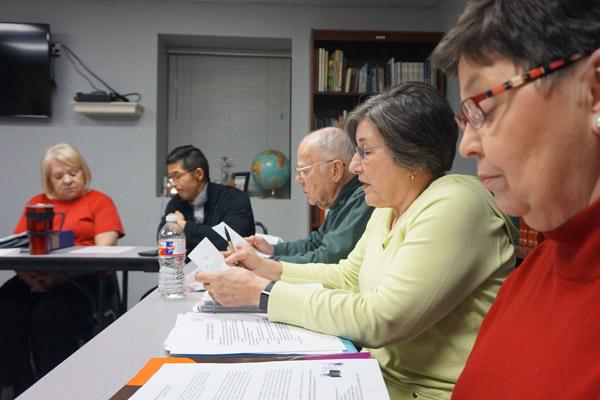 Conferences in Jonesboro, Rogers and Bentonville will host their walks Sept. 30.

Those interested in becoming members of the central Arkansas conference can call the assistance line at (501) 819-2059 or email stsannejoachimconference@gmail.com.

People can also donate by mailing cash or a check to:

There are many charitable organizations that work to make society better for those in need, but few meet people where they are at. In Arkansas and around the world, the Society of St. Vincent de Paul aims to do just that, while living the words of the saint who inspired the society: “Charity is infinitely inventive.”

“We go to the people’s homes and try to help,” said Joe Clark of Bentonville, St. Vincent de Paul district council president. “We actually see what’s going on and what the needs are and see if there are other issues we might not hear about.”

There are nine conferences, or councils, in the state, particularly in the north and northwest in cities like Rogers, Cherokee Village and Bentonville. Each assists families in their area primarily with rent, utility bills and food. All are under St. Vincent de Paul Society USA. The newest conference is Sts. Anne & Joachim Society, the first official St. Vincent de Paul conference for Central Arkansas. The conference was formed at the urging of Vincentian pastor Father Toshio Sato of St. Anne Church in North Little Rock and was approved by the society in September 2016.

“There are so many needs of the poor and Little Rock didn’t have a conference,” Father Sato said. “As soon as I came here, I wanted to do it.”

“It just brings you in connection with other people that are trying to live their faith and help others to grow in their faith,” Glancy said.

The 15 members meet twice a month and about six to eight do home checks for people who call and request assistance. “That’s the problem we have even the first of the month or the end of the month when bills are coming due, we’re swamped,” he said of the need for more volunteers to join the society and do home visits.

They have had to turn some people down in the past, but Glancy said the home checks, typically done in pairs, are meant to “make good judgments versus being judgmental.”

“They’re always very grateful. Some of them are embarrassed to be asking for help,” said member Jan Brass. “… It’s really fulfilling to go in their homes and for them to be welcoming and happy to see you and very grateful at the end. We always ask them if we can pray with them. I have not yet met one person who said no.”

The conference will request to see a bill to make sure it’s in the person’s name and will pay the utility company or landlord directly. Typically they pay $300, though it can be more under certain circumstances, Glancy said. If they are unable to help, they refer those in need to other local resources.

Donations primarily have come from parishioners of St. Anne and of Holy Trinity Church in Dallas, where Father Sato served previously. Glancy said Catholic Charities of Arkansas has worked with the conference and Catholic High School has donated food. Because it’s a lay organization, no donations come from the parish budget. Because of limited volunteers and resources, the conference serves people in North Little Rock and Sherwood.

Anyone can join the organization and with more people, they may be able to expand into Little Rock and other central Arkansas cities, Glancy said. One of the goals of the conference is not just financial assistance, but mentoring if a client requests it.

“We would like to see some growth in the mentoring area. To help people realize where they can make some changes to make payments and things like that so they’re not always in the need of someone helping them out all the time,” he said, adding that could mean helping a family budget expenses.

Brass said volunteers have tried to mentor on  a small scale, but she said there’s a greater need.

“We try to look and see if we can help them besides paying their bills. We get to know them a little bit and see if it’s other things; why aren’t they able to support themselves?” she said.

Glancy said the conference is always rooted in spirituality, including doing a short Scripture study at each meeting. He hopes others will be inspired to become members or donate.

“When you get involved in something like this your eyes are open to people in real need,” Glancy said.

Conferences in Jonesboro, Rogers and Bentonville will host their walks Sept. 30.

Those interested in becoming members of the central Arkansas conference can call the assistance line at (501) 819-2059 or email stsannejoachimconference@gmail.com.

People can also donate by mailing cash or a check to: