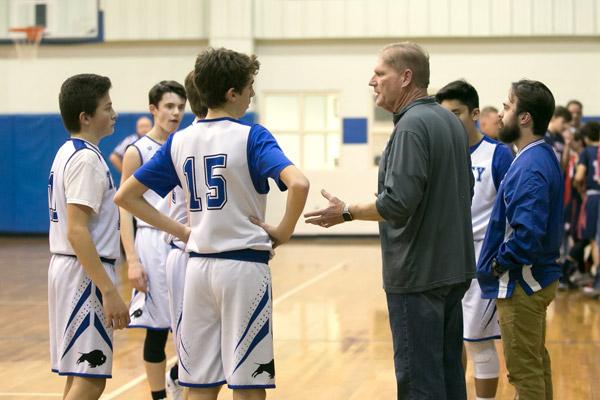 Like a lot of people born in North Carolina, he found his way to the Tarheel side of the storied rivalry early in life and it’s only intensified with age. The only time Meares relents in his vitriol about the Blue Devils is when he gets around Father John Antony, administrator of Trinity Junior High School in Fort Smith.

“Father John, he’s a big Duke fan and I go, ‘Why?’ He said, ‘Because (Duke head coach) Mike Kryzyewski’s Catholic,’” Meares said, his tone taking that uniquely bless-his-heart hue. “I guess I got to go with that.”

Collegiate alliance aside, Meares is also atop Father Anthony’s list of favorite basketball coaches. The 54-year-old father of three reached an impressive milestone this season — 500 wins on the nose — all of them on the Buffalo sidelines.

“I always say, ‘Hey, you’re going to get punched in the nose but you got to come back and swing again. You got to go back at it.’” Jeff Meares

“It’s a great job; I go home at night and I can go to sleep. I don’t have to worry about what the kids are doing in the dorms or if they’re driving home,” he said. “Our kids are loved by our fellow high school coaches because it’s ‘yes sir-no sir’ when our kids move on. They get there and coaches are like, ‘Man, you guys are doing it right.’”

Meares caught the coaching bug early as his family was good friends with former North Carolina coach Bill Guthridge. He started at point guard for his high school team, playing in the state finals twice. Midway through college, the family moved to Arkansas where he finished his degree and settled into a 9 to 5.

“I was kind of spinning my wheels in the business world,” he said. “I knew that I loved basketball. Something was missing.”

While finishing up some college credits, Meares was invited to be a student assistant on the University of Arkansas Fort Smith coaching staff. He might not have taken it at all without the staunch support of his wife, Norma.

“I was married and had a child on the way,” he remembered. “It was selfish on my family, but it was one of those things where you had to compromise. My wife was like, ‘If this is what you really want to, do let’s do it. We can make it work.’ She’s the reason why I’m successful.”

After a few years on staff, Meares had a conversation with Greenwood head coach Ronnie Williams, at that time the coach at Trinity. Williams convinced Meares to come on board as an assistant and served as the young coach’s mentor. That was 500 wins ago.

For 12 years Meares has coached every grade at Trinity and even now, as head coach, is still called on to sub in with grades below the varsity level. In fact, he’d be sitting on 498 right now if he hadn’t been pulled in for short-term duty when the seventh-grade coach had to miss a few games. Regardless of the grade level or the competition, Mears’ priorities for his teams are the same.

“We’re going to come out and fight,” he said. “I always say, ‘Hey, you’re going to get punched in the nose but you got to come back and swing again. You got to go back at it.’”

“Our mentality is, we’re going to be in better shape than every team we play. We want to see when we go up and down the floor that we’re not bending over at the free throw line taking a break. We don’t do that. We condition until we can’t take any more and then we just come out and fight.”

Meares, who converted to Catholicism 33 years ago, said he’s got no interest in moving up the coaching ladder. He’s too appreciative of the atmosphere at Trinity to want to be anywhere else for his next 500 wins.

“What a great place to be, man. It’s about wins and losses here, but it’s also about creating an individual that’s going to be a model citizen,” he said. “We’re playing in the highest conference and we’re competing. We’re not just getting beat every night.

“We’re trying to prepare them for that next level and putting our Trinity stamp on them. I can go, ‘Yup, I helped that kid,’ and that’s what it’s all about.”