On stage or in front of the camera, Brooke Buckner delivers for her audience 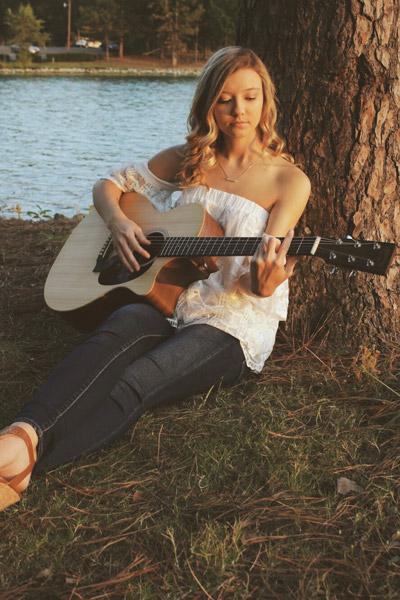 Whitley Austin
Brooke Buckner gets in some rehearsal during a photo shoot. The sophomore broadcast journalism student is active in music ministry at Arkansas State’s Catholic campus ministry and is working on her first album.

Whitley Austin
Brooke Buckner gets in some rehearsal during a photo shoot. The sophomore broadcast journalism student is active in music ministry at Arkansas State’s Catholic campus ministry and is working on her first album.

Asked for her primary musical influence, Brooke Buckner doesn’t even bat an eye.

“Taylor Swift is a big inspiration for me,” she said. “She is my favorite artist to listen to, and I love learning from her songs, too.”

Buckner, who has a passing physical resemblance to the mega superstar, is a talented musician in her own right. She’s already cut one single, “Say Goodbye,” and an album is in the works. And while she doesn’t quite have the worldwide following of her idol — yet — she does support an impressive array of social media platforms to help promote what she’s doing.

And that doesn’t even count the many ways she lends her musical talents to youth retreats, summertime Masses at Our Lady of the Holy Souls Church in Little Rock and playing for Catholic campus ministry at Arkansas State University in Jonesboro where she’s a sophomore broadcast journalism student.

“I have been into music for a very long time,” she said. “I started playing guitar at the age of 7. My dad (Ed, chief meteorologist for KTHV) taught me the basics and after that I was kind of self-taught. I never took real lessons from anyone.”

Brooke’s formative years were spent between Little Rock’s Christ the King and St. Edward parishes where she also attended their respective schools. Once she reached Mount St. Mary Academy, she was encouraged to put her music out there with the help of Susej Thompson, music director at Holy Souls.

“In high school is when I started playing in front of people more,” Buckner said. “My sophomore year, Susej asked me to lead music with her at all of our Mount retreats. Ever since, I’ve been a part of her team and we’ve traveled all over Arkansas to lead retreats. Usually it’s kids and other times it’s college students. Sometimes we play for people older than me.”

Once at college, Buckner latched onto the Catholic campus ministry at Blessed John Newman University Parish where she plays twice a week for meetings and weekend Mass. Inspired to continue to grow as an artist, she recently launched her own weekly broadcast online.

“I do ‘Praise with Brooke.’ That is a new thing,” she said. “I’ve done it three weeks now with the Newman Center. Basically I go live every Monday at 1 p.m. and I play about three songs and I talk in between and pray with whoever is watching and talk about what songs mean to me.”

“I want my music to move people. This might sound really weird, but I have made people cry on multiple occasions when I have sung live, and I like it when I make people cry.”

Buckner hopes to have her album completed this summer with songs cut from the same cloth as “Say Goodbye”, a medium-tempo tune about a changing of the seasons in her life. She doesn’t limit herself strictly to Christian themes, she just stays open to inspiration for new songs.

“Inspiration comes from real-life experiences. A lot of times they’re sad experiences; for some reason it’s just easier to write about that than the happy things. I don’t know why that is, but that’s just the way it is.”

Children in Hot Springs jam out, learn about Scripture