A Catholic you want to know: Diane Bausom 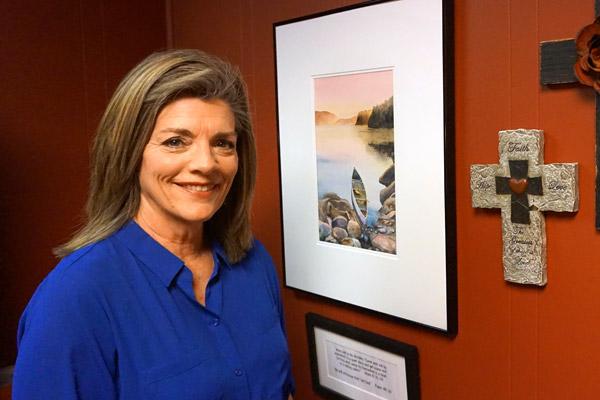 Aprille Hanson
Diane Bausom stands in the spiritual direction room at St. Joseph Church in Conway, beside a boat picture that helped confirm becoming a spiritual director was the right path for her.

Aprille Hanson
Diane Bausom stands in the spiritual direction room at St. Joseph Church in Conway, beside a boat picture that helped confirm becoming a spiritual director was the right path for her.

Why you want to know Diane Bausom: Diane has served on the St. Joseph Parish Council in the past, participated in Scripture studies and for five years, she served on the Magnificat service team. For about three or four years, she has taught a six-week forgiveness course, based on the Allen Hunt book, “Everybody Needs to Forgive Somebody.” She is a Eucharistic minister and lector when needed while attending daily Mass. Bausom graduated from the School of Spiritual Direction offered through the Diocesan Faith Formation Office in June 2016 as a certified spiritual director.

What feeds you spiritually?
Daily Mass, daily prayer time, sacrament of reconciliation — that one keeps me humble. I would have to say my spiritual community, the people I either go to class with or pray with — a network of spiritual friends, and (adoration) chapel time. I make an effort to get there often, we’re so blessed to have that chapel … I don’t go to daily Mass or go to the chapel because I’m some holy person. I go because if I didn’t, I would just slip right back into where I was, which was just kind of going through the motions.

You grew up a cradle Catholic in Beebe and came to college at the University of Central Arkansas in Conway. You joined St. Joseph and made your Cursillo in 1988 — how did that change your faith?
I always went to Mass, but I had no desire to go to daily Mass and my prayer life was almost nonexistent … It was head praying as opposed to praying with my heart; really talking to Jesus like somebody I want to know.

You attended spiritual direction with Father John Marconi, former pastor at St. Joseph Church in Conway. Did that influence you to become a spiritual director?
God used him mightily to help me meet God the Father and find out how much he really loved me and it brought so much healing in my life … You get to the point you’ve been given so much, all I kept saying was, “What can I do in return,” that would be my prayer, “how can I share all this amazing stuff he’s given me?” About that time, the diocese was going to start up the spiritual direction program.

For people that feel they are spiritually lost, what do you recommend?
To sit with God in prayer, but to make sure you leave time for him to talk. I would tell them to go to God, tell him you feel lost and see what he says. Well, they’ll say, “He doesn’t say anything.” Then ask him why he’s not talking to you. The whole purpose, the type of spiritual direction we do which is all based on Ignatian spirituality, is that God is speaking to us in everything; we just don’t always take the time to listen.

Was there a moment that made you realize you were following God’s call as a spiritual director?
In my prayer time I kept seeing an image of a little boat. And I thought I don’t usually get those kinds of images, but I had learned to pay attention to that, so I’d write in my journal, “saw a little boat.” Three weeks later, there’s the little boat and I can kind of see Jesus’ feet by the boat. I’m just like, “what is going on?” … Father John had called me a week or two earlier saying I got a picture for the spiritual direction room … So now fast forward I’m going into the office for my first (directee) and I’m thinking, “What am I doing? Why did I think I could do this?” And I just started panicking. I walked into the room we were going to use and that picture with the little boat, that is the boat I kept seeing. I sat down and just said, “My boat.” I felt that was God’s way of telling me, “Yeah, you are where you’re supposed to be.”