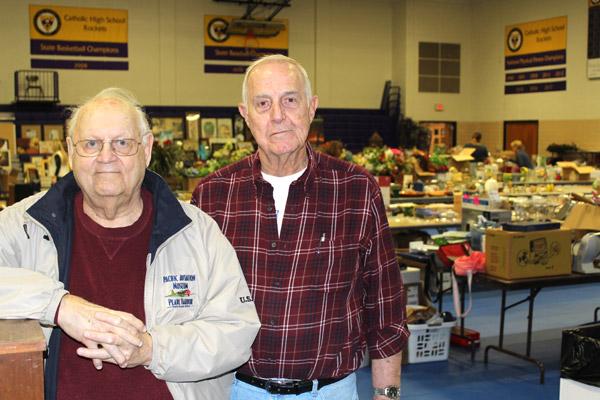 50 years: If it’s spring, it must be time for Junktique 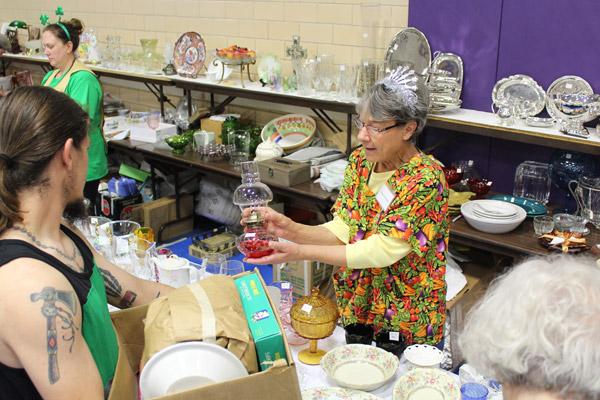 Dwain Hebda
Martha Kordesmeier works her magic during the Junktique sale at Catholic High School in Little Rock. The event, which marked its 50th anniversary in 2018, has raised more than $500,000 over its history.

Dwain Hebda
Martha Kordesmeier works her magic during the Junktique sale at Catholic High School in Little Rock. The event, which marked its 50th anniversary in 2018, has raised more than $500,000 over its history.

“You need one of these!”

Martha Kordsmeier’s face breaks into a smile as glittering as the tiara she’s donned for today’s event. The passer-by claims she’s just looking, but nobody just looks here at Ms. Martha’s station square in the middle of the silver, crystal and china assembly.

“Isn’t that gorgeous?” Kordsmeier purrs, holding up a small vase at just the right angle to catch the light, without breaking eye contact. The customer’s knees buckle. Ms. Martha reaches for the nearby pile of newspaper and, literally, wraps up the sale.

Welcome to Junktique, the annual rite of spring hosted by Catholic High School in Little Rock. A one-day feeding frenzy of items plumbed from the depths of attics and garages, storage units and sheds, it’s the mother of all garage sales.

“We’ve had ‘em outside four abreast all the way down University (Avenue) waiting to get in. I mean I’ve been here to see it.” Larry Wilson, Junktique volunteer

“It’s become a city-wide event. People look forward to it,” said Jim Barre, Christ the King parishioner and longtime Junktique volunteer. “When we open the doors, they just flood in. A lot of them are repeaters and they know right where they want to go.”

“People will come from all over, from out of state, to go through this,” chimed in Larry Wilson, a fellow parishioner, volunteer and pal of Barre. “We’ve had ‘em outside four abreast all the way down University (Avenue) waiting to get in. I mean I’ve been here to see it.”

Barre, 84, and Wilson, pushing 83, can’t agree on how many years they’ve been volunteering at Junktique, but 40 isn’t out of the question. Wilson volunteered first then recruited Barre a couple years later. It’s been a fun ride, but not something either of them ever imagined would come to occupy their time, once a year, for four decades.

“It’s a feeling of belonging so to speak,” Wilson said. “We have people from all over the state, and out of state, come here to work, not just people living in Little Rock. They come back and they come back.”

CHS dates back to 1930 and moved to its present location in 1961; the inaugural Junktique was held when the “new” high school was just seven years old. O.D. Treadway is credited with organizing the first sale, which reportedly took in the princely sum of $275.

Through the years the amount of donated inventory, as well as the proceeds, have grown considerably. Joan Finnegan, the school’s administrative assistant who’s also spearheaded the event for nearly 20 years, said Junktique has done all right for itself over five decades, raising more than $500,000 to fund school projects and control tuition.

If that figure alone doesn’t paint a picture of the variety and volume of items that have passed through Junktique’s doors over the past half century, words alone hardly do it justice. The annual panoply assaults the senses — filing cabinets and foosball tables, tea dresses and tennis rackets, vinyl records and leather sandals. This year the centerpiece was a vintage motorboat complete with trailer and a $2,500 minimum price tag, but a boatload of other things could be had for just a few bucks.

“It’s deja vu all over again for the last 30 years,” Barre said. “Walking in here once this is loaded up, it still keeps replenishing, but it looks the same. It looks the same. (Stuff) comes; I don’t know where it comes from.”

Like any retail enterprise, Junktique has its regulars. Wilson remembers one guy who annually bought every bicycle available to provide parts for his bicycle shop back in Mississippi. A woman, also from Mississippi, did the same thing but with freezers. Barre remembers a local phlebotomist whose side hustle was selling VCRs and he’d plunder Junktique for inventory, repairing as necessary.

“One of the fun times for me was we’d bring in the televisions,” Barre said. “We worked it out so we could have a whole double row of TVs all operating and showing the same picture just like if you’d walked into Best Buy. We had the prices on there and they sold out very quickly when we did that.”

“It was a great selling point because they could see it, you know. ‘Well, I’ll take that one,’ and we’d sell it, put another one right in its spot, hook it up,” Wilson said with a grin. “It was interesting. I enjoyed it. But those old TVs? Man, they were heavy. You got tired.”

About 10 percent of the inventory goes unsold every year and after sifting out the genuine junk, the remainder of items are donated to local charities. But before that happens, Barre said, anything is possible.

“Don’t say, ‘We can’t sell that.’ You’d be surprised what we can sell,” he said. “I’ve had a box of wires back in electronics that looked like they’d been in the garage for 30 years, full of dust, all tangled up. You put three dollars on it and by day’s end, it’s gone. You just never know; stick a price on it and see what happens.”

CHS senior dreams of day he can be an Orthodox monk