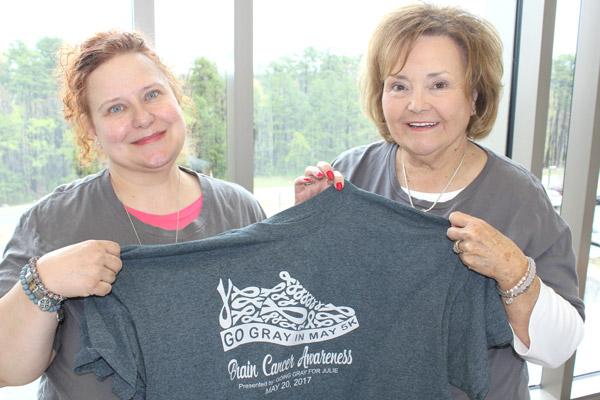 Dwain Hebda
Julie Session (left) and her mother, Andrea Papini, display a t-shirt from 2017 Go Gray in May 5K. The inaugural event drew 200 runners and raised $20,000 for brain cancer research.

Dwain Hebda
Julie Session (left) and her mother, Andrea Papini, display a t-shirt from 2017 Go Gray in May 5K. The inaugural event drew 200 runners and raised $20,000 for brain cancer research.

The 2018 Go Gray in May 5K is Saturday, May 19 at 8 a.m. in Morrilton, offering running, walking, wheelchair and kids divisions as well as a virtual runner option. To register, visit https://runsignup.com/Race/AR/Morrilton/Gograyinmay5k. For questions and additional details, see the Going Gray for Julie Facebook page, email gograyforjulie@gmail.com or call (501) 454-9147.

Julie Session stares out a sleek glass window wall at the matte morning sky. From the third floor of the hospital where she’s reported for her regular treatment, the view is an unbroken pewter slate stretching in all directions. It reminds her less of the enormity of her battle as the breadth of her resolve.

“The doctor, the first thing he told me was, ‘There’s no cure, but it’s treatable,’” she said. “There’s still that hope out there and that’s what I’m trying to spread to people and to put out better awareness. Everything out there is ‘Oh, you’ll live 18 months and that’s it.’ I know people who are living past that.”

Most of the people here — shell-shocked and weary from the siege cancer is waging on their lives — don’t even glance at Session, never mind bother to ask about her T-shirt. It reads, “Going Gray for Julie,” the foundation she launched last year with the help of her mother, Andrea Papini of Conway to raise money for cancer research, which they do through the Going Gray in May 5K.

“Gray is the color of the ribbon for brain cancer, like ‘gray matter,’” explains Session, a member of Sacred Heart Church in Morrilton. “May is brain cancer and tumor awareness month. That’s how we came up with the Going Gray in May 5K. Plus it rhymes pretty good.”

“We know how important research is because there’s not a cure for this kind of cancer that Julie has, as of right now.” Andrea Papini

“We know how important research is because there’s not a cure for this kind of cancer that Julie has, as of right now,” Papini said. “UAMS has been on the cutting edge of some things and I just pray that, while we want a cure anywhere, wouldn’t it be beautiful if it came out of Arkansas.”

A month of debilitating headaches led Session to an MRI on Dec. 23, 2013. The next night, Christmas Eve, her doctor said the test showed a little something to be checked out.

“I had an appointment on the 26th at 8 in the morning,” she said. “My ‘little something’ was a 7.5-centimeter tumor behind my right eye. We met with a neurosurgeon and at 5:30 the morning of the 27th, I had surgery to have it removed.”

Session, 48, had drawn a doozy of a diagnosis: Grade IV glioblastoma multiforme (GBM), the most advanced stage of the most aggressive, fastest-growing brain cancer there is. Even surgery, 30 radiation treatments and years of chemo have made her no promises.

“Life expectancy when you’re first diagnosed is 18 to 24 months; either you reoccur or you die,” she said. “For me to be four years out is pretty incredible; I have lots of friends who have reoccurred, who have passed away, who didn’t even make it a year.”

It’s these friends, both living and memorialized, who inspired her to start her foundation and the charity race that funds it.

Last year’s inaugural 5K in Morrilton showed how powerful the idea was. First-year road races usually have modest participation and last-minute organizational hurdles and the threat of bad weather had Session and her crew hoping for 30 runners. Instead, more than 200 turned out, raising $20,000. In the most curious of ironies, the disease that nearly took Session’s life had gained her a circle of love and support she couldn’t have otherwise imagined.

“I’ve been so humbled at how many people, people I don’t even know, let me know they’re praying for me. It is just unreal,” Session said. “I’m a member of a GBM group on Facebook and it’s only for the patients; it’s not for caregivers, it’s not for other types of brain cancer. They’re all over the world. And we pray for each other.”

It’d be great if such things guaranteed a happy ending; if prayers and hugs and well-wishes were tokens for more days, good for life. Of course, that’s not reality. Through the rough patches, Session draws strength from her husband, Todd, and her four children Katie, 17, Jake, 14, Alexandra, 12 and John Andrew, 7. She also leans daily on the faith instilled in her by Andrea and Deacon Richard Papini, her father.

“I use Isaiah 41:10 (Do not fear: I am with you; do not be anxious: I am your God. I will strengthen you, I will help you, I will uphold you with my victorious right hand.) I love it. It definitely gives me the hope and the strength to just get through the day.”

The 2018 Go Gray in May 5K is Saturday, May 19 at 8 a.m. in Morrilton, offering running, walking, wheelchair and kids divisions as well as a virtual runner option. To register, visit https://runsignup.com/Race/AR/Morrilton/Gograyinmay5k. For questions and additional details, see the Going Gray for Julie Facebook page, email gograyforjulie@gmail.com or call (501) 454-9147.