In 25 years since his ordination, Father Michael Sinkler has worked as a missionary, retreat director and parish priest. In every case, he sees his most important job as mentoring others to reach their potential. 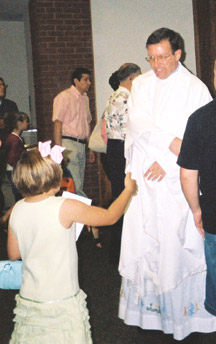 BENTONVILLE -- All of his life Father Michael Sinkler and his family have been connected to the Church.

As a youngster growing up in St Louis, Father Sinkler, his parents and three sisters were parishioners at the church his grandfather, Frank Konersman, built.

"When I was in grade school and the sisters (Precious Blood) wanted anything done, they naturally said, 'Frank's grandson will do it.'"

Father Sinkler, pastor at St Stephen Church, is celebrating his 25th ordination anniversary with his congregation this summer. The celebration is scheduled for Sunday, July 23 at the 10 a.m. Mass. Father Sinkler was ordained a priest in the LaSalette religious order in St Louis, Mo., on July 24, 1981.

Father Sinkler said he was close to the pastors and Precious Blood sisters when was growing up in the 1950s. It was this contact with the priests and sisters that encouraged Father Sinkler to consider the priesthood.

"I knew them as people. They cared for me in a lot of ways. So I thought I could do that for somebody too," Father Sinkler said.

As a result he entered the religious life as a LaSalette missionary. As Father Sinkler was making decisions about his vocation to the priesthood, a change was occurring in the Church that had an impact on his role as a priest.

"I remember coming into the seminary right after Vatican II," he said. "I was very much aware of the hurt in people's heart because they felt like their Church had changed. This is one of my ministries even today -- to have people understand that Vatican II didn't change their Church. The core is still the same."

After ordination in 1981 Father Sinkler held a variety of assignments -- building a church in Louisiana, staffing a novitiate in Washington, D.C., and serving as vocations director for the LaSalette order.

However, it was his work as foreign mission director to represent Madagascar that prepared him for his work as a parish priest. He began traveling and presenting retreats and missions in various parishes to educate Americans about the LaSalette's work in Madagascar.

"He told by one of the pastors where I was conducting a retreat that he wanted to see me. The bishop wanted to know who was coming into his diocese on a regular basis," he said.

At that time Bishop McDonald was starting a new mission in Bentonville. In his instructions to Father Sinkler, Bishop McDonald said, "You could go and really help this community get started. I really want it to be a community where you can teach the lay people and empower them to administer the parish."

At the end of the three-year loan in 1995, Father Sinkler made the decision to continue with his duties as a parish priest and to leave the LaSalette community.

In discussing the meaning of a priest's ordination, Father Sinkler said his call is to form community in the Church.

"A priest is to be the heart -- to be the mentor -- of the community. We have to empower other people to use their skills, especially in my parish," he said.

His call to empower also extends to the parish staff. "I am blessed with people who do a lot of the administration duties," he said. "My staff is my second family now."