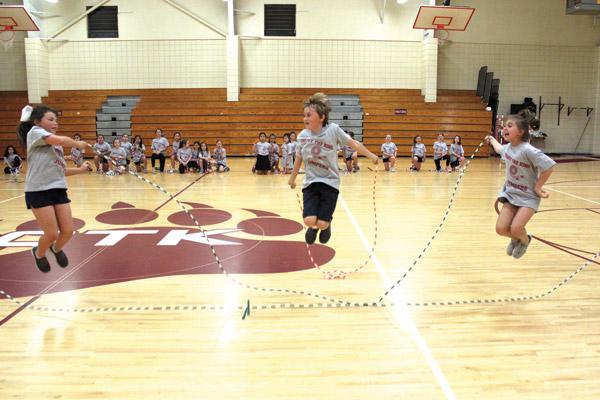 The plastic jump ropes slap against the gym floor skimming under 40 pairs of airborne feet. Music blares from the stereo, adding further tempo to the bobbing, bouncing, bounding third- and fourth-graders of Little Rock’s Christ the King School. Practice for the school jump rope team, all 20 minutes of it over their midday recess, has begun.

The jump ropers hop, skip and jump over the brightly colored ropes until exertion flushes their cheeks. Once loose, the kids dabble in some tricks to get their timing down just right. Some twirl ropes over their heads like lassos; others jump on one leg or in tandem on the same line. Ropes hum forward, backward, side to side; one seated girl swings the line half an inch above the floor and, bouncing on her rear end, passes the rope under her body with ease.

“I always loved jump roping, since first grade,” said third-grader Maddy Murillo, her dark eyes sparkling. “I always wanted to have a jump rope team to do all these fun tricks.”

“In second grade, I saw people doing double dutch and I thought it was really cool. So I wanted to start jumping and when our new gym teacher came, I was so glad that there was a team.” Brayden Hill, fourth-grader at Christ the King School in Little Rock

The steady cadence of jump ropes stills at once when a voice cuts through the heavy, late spring air. The pint-sized jump ropers take their spots as team coach and first-year PE teacher Courtney Cancienne skitters about, imparting instructions. A former jump rope teamer herself at their age, she’s a dynamo, herding, cajoling and leading her charges through their paces.

“I just think it’s such a great little sport, great exercise,” said Cancienne, a Virginia native. “It’s a good activity that a lot of people can do.”

While that may be true, few adults have what it takes to do what the team members are required to do. Movement is constant and rigorous, yet none of the youngsters seem to be even breathing hard and no wonder – from the very first practice, Cancienne made it clear that for the team to have fun, they would first have to work.

“The first practice I sat them down and said, ‘Hey guys, you’ve got to jump for 20 minutes,” Cancienne said with a beguiling smile. “I lost a lot of kids that way. I mean, we probably started with 60 kids and slowly some trickled out to recess.”

For the staunch 40 or so who remained, jump roping has become more than a means to kill time. Cancienne said her athletes show a level of dedication that’s inspiring, especially at such a tender age.

“They’re dedicated to come to practice; this is their recess time and they choose to come here,” she said. “I’ve got a couple who are really into it. I’ll show them something on a YouTube video and they will practice it at home and then they’ll come in a week later and say, ‘Coach, I got it.’”

Brayden Hiller is just such a devotee. One of a handful of boys in the club, the fourth-grader is a component of many of the squad’s most complicated tricks, including a showstopper which involves two long ropes, one short rope and three jumpers all going at the same time.

Hiller spends extra time at home to get things just right, using some old jump ropes his dad had lying around.

“I like that we have a routine and just that I could be challenged to do jump roping,” he said. “In second grade, I saw people doing double dutch and I thought it was really cool. So I wanted to start jumping and when our new gym teacher came, I was so glad that there was a team.”

The squad got a taste of the spotlight by performing at different school functions and at a UALR Trojan basketball game.

“I was nervous, but it was a fun experience,” said Murillo, whose specialty is hopping on one leg. “I think that the crowd thought it was very impressive.”

As if all that weren’t enough, the kids also wanted to leave their mark for future jump rope squads to shoot for. Teammates set the first-ever school record for jump roping, registering 227 consecutive double dutch jumps.

Cancienne said there’s more where that came from; she’s already decided to open the club to fifth-graders next year and has ambitious plans for her ebullient squad.

“Next year we’re going to do a lot more traveling. We’re going to go over to Easter Seals a bunch next year, they love that,” she said of the center for children with disabilities across the street from the school. “I’d love to go over to UCA and perform there. Do some school performances, do another UALR game.”

“You know, everybody loves to watch a jump rope team, they’re just fascinated by the skill. Next year we’ll have two years under our belt and we’ll have learned better tricks. I’ve got a lot of tricks under my sleeve. We haven’t even tapped into them yet.”