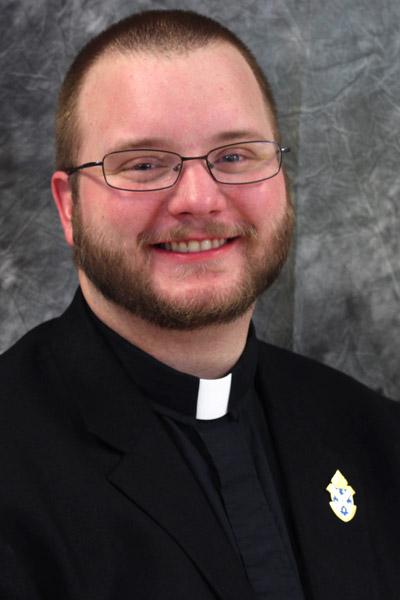 “She really just kind of needed to talk and so we did,” he said. “Weeks later she came back and thanked me and said I had really been a good ear for her and it was good for her to pray with me in that moment.”

It’s times like this, being Christ to others, that Higginbotham said “really kind of hit home that my ordination was coming.”

“I never thought I’d be a good preacher, but there’s moments at the ambo when I realize God is really talking to me through this homily.”

“It’s exciting. It’s kind of scary, kind of nerve-racking,” he said. “It’s the beginning of the rest of my life really so it’s awesome.”

Higginbotham, a North Little Rock native, attended daycare with the sisters at St. Joseph Home and St. Mary Church and School. When his family transferred to St. Anne Church in North Little Rock, he was active in youth ministry.

His older sister Samantha admitted at his diaconate ordination that she knew he’d be a priest as a child because of his faithfulness — even if he didn’t even know it yet. He joined the seminary after graduating from Catholic High School in 2010.

Looking back at his discernment, Higginbotham said Psalm 16 has been special: “He has put into my heart a marvelous love for the faithful ones who dwell in his land.”

“I’ve never been able to explain why I care about and for God’s people. I think that explains it really well, that God has put into my heart a love for God’s people,” he said.

One of the biggest lessons he learned in seminary was “you don’t have control of everything going on and that’s OK.”

“Being open to all the lessons that come from all around and realizing I don’t have all the answers but someone does” he said.

“I think pastoral counseling is something I’ll have a gift for; that and preaching. Turns out I really enjoy it. I never thought I’d be a good preacher,” he said. “But there’s moments at the ambo when I realize God is really talking to me through this homily.”

As a “young person set aside” to follow religious life, Higginbotham said that example can “stand as a sign that can kind of give them a little bit of a resting place from all the pressures that are put on them,” he said of Mount St. Mary students, who may feel “wrapped up in relationships or who I need to be or who they’re telling me I ought to be. Being either ordained as a priest or sisters, we stand outside from all of that,” offering a different perspective on life choices and discernment.

Higginbotham said no matter where he serves, he wants to be a “joyful priest and an approachable priest.”

“I want to be a priest who people feel comfortable stopping wherever and asking if I can hear their confession,” he said. “I want to be the priest people are comfortable around and joyful around.”