Morrilton grad makes everyone around him feel better

Zachary was happy to encourage his fellow students, teammates 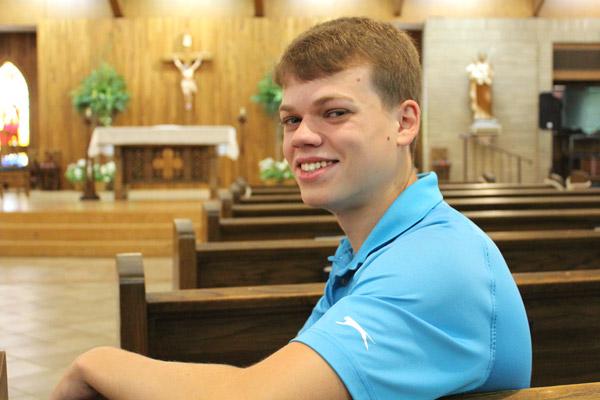 MORRILTON — Daniel Zachary never led the box scores in basketball, never set the world on fire on the golf team and never held an office on the student council to which he was elected his final two years at Sacred Heart High School.

But none who participated in those activities alongside of him — as well as Beta Club and Key Club — would have got as much out of those experiences without him.

“Being around my classmates, my fellow students and my teachers, they’ve always felt like family to me, honestly,” he said. “Ever since I’ve been going to Sacred Heart from kindergarten to my senior year, you know almost every single person in the school for how small it is. We only have about 200 students, so you get to know almost everybody.”

“Yeah, well, I guess you wouldn’t say I was the best one of the group; I never really developed into a solid player on the court,” he said. “But even though I didn’t become a major player, I still loved to be on the team. I loved the atmosphere, I loved cheering everybody on.”

“Watching my teammates do well and building them all up and feeling the energy it gives you, you couldn’t get better than that.”

The only child of Wayne and Yvonne Zachary, Daniel learned early how to serve others. He still recalls with a laugh his “decision” to become an altar server at Sacred Heart Church there.

“The second I got an opportunity to be an altar server, my mother put me in it,” he said. “She said, ‘Once you get the opportunity, you’re serving and that’s final!’ And I was OK, whatever you tell me. I was an altar server from, I think that was around third grade to I served my last Mass a couple of weeks ago.”

Service to the Church spilled out into the community. He and his classmates performed a variety of beautification projects from roadside trash pickup to putting out flags at the hospital to honor veterans. The only thing better than the camaraderie was the reaction of the hometown folks whom he helped.

“When you do stuff for people and they come in and say ‘thank you’ and you see the smile on their face,” he said. “What you did just made them happy, it makes them cherish you for what you did. You can’t beat that when you put a smile on someone’s face.”

Zachary is famous for his own omnipresent smile, something he hopes he is remembered for after he’s gone.

“I was always told by teachers, ‘Dang, do you ever not have a smile on your face?’ I dunno,” he said. “I just hope that people remember me as having a smile on my face and when it gets tough, just shake it off, tell yourself you’re going to be all right and keep pushing forward.”