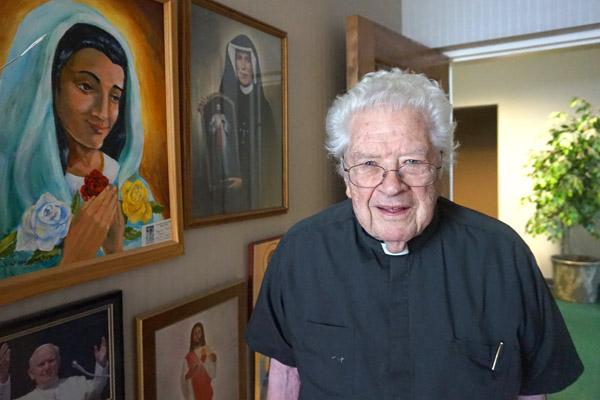 Aprille Hanson
Father Thomas Keller stands by religious images in his apartment at St. John Manor in Little Rock. The 85-year-old retired priest, who served in parishes throughout Arkansas, celebrated his 60th jubilee on May 15.

Aprille Hanson
Father Thomas Keller stands by religious images in his apartment at St. John Manor in Little Rock. The 85-year-old retired priest, who served in parishes throughout Arkansas, celebrated his 60th jubilee on May 15.

Outside Father Thomas Keller’s door are treasures from his 60 years of priesthood: three miraculous pictures framed together, his military ring and a signed baseball — a memento from playing catch with children inside the diocesan courtyard, which he overlooks from St. John Manor as a retired priest for the past four years.

While only objects, they signify his devotion to the Lord, service to the country and passion for all life.

Father Keller, 85, celebrates his 60th jubilee, his ordination to the priesthood May 15, 1958. He was born near the Cathedral of St. Andrew in Little Rock, the seventh child of J. Walter and Isabelle Keller. His uncle was a priest and seven aunts were nuns.

“I loved to work on a homily and give it the way the Lord wants it and not the way I want it.” Father Thomas Keller

“I had some great examples in the priesthood,” he said. “… All of those that died helped me to the priesthood. I will thank them eternally because they’re the ones who showed me the way.”

“I loved to work on a homily and give it the way the Lord wants it and not the way I want it. Sometimes there were conflicts in what I wanted and what the Lord wanted,” he laughed.

“We had miracles take place over there when I was there … I call it the ‘parish of predilection’ because it is a parish that it seems Our Lady chose,” he said.

But Father Keller was never bound by parish walls. He was a priest who ushered in the new era of Vatican II, describing it as “a shot in the arm” to tackle a new modern Church. He was vocal about Church teaching at a time when many priests were not, ministered in prisons and defended the unborn.

Father Keller built the Life Center, where the nonprofit Arkansas Right to Life is housed, putting up St. Michael the Archangel and the Blessed Mother statues facing an abortion clinic, which eventually closed.

“It’s always dawned on me that pro-life issues are the most important issues there are. And there’s nothing that exceeds it, so why not build a pro-life center?” he said.

Despite being an admitted “joker” in nature, Father Keller choked up recalling days as a major in the Arkansas Army National Guard, ministering to men fighting in Desert Storm. He joined the guard in 1969.

“I enjoyed the heck out of it; of course I was scared to death most of the time because we were in combat with the enemy. But we had our jobs as chaplains and we tried to bring the Eucharist and the sermons to the troops in the field wherever they were so that was always a great experience to see those beautiful guys giving their life for their country,” he said, adding in a quiet voice, “Hard to realize how great it was.”

Younger priests will stop by to visit him, something Father Keller said he enjoys. He called the eight new ordained men “a blessing.”

“That’s a great thing being able to talk to them about what’s going on these days and it doesn’t sound very good. But who knows. They can change the world if they want,” he said.